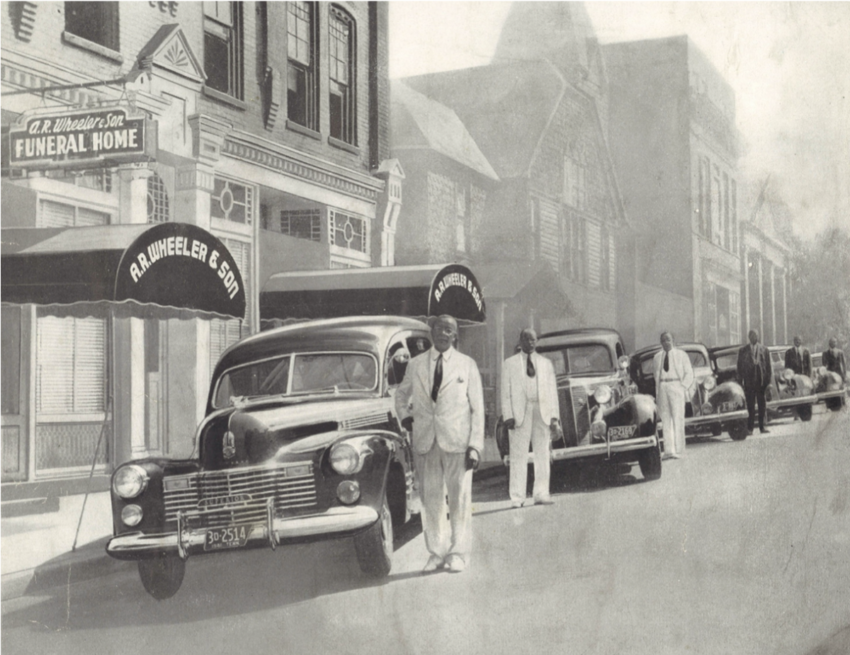 A.R. Wheeler & Son funeral home, 1922-1940s, was considered the largest in East Tennessee providing funeral, ambulance, and embalming services to people of all classes. It was relocated through Urban Renewal and never recovered. Adjoined buildings were also occupied/owned by Black businesses, circa 1941. This is now Knoxville's Old City. (Photo Beck Center Collection)

The mission of the African-American Equity Restoration Task Force is to create pathways to return some of the hard-earned well-established Black wealth that was taken through centuries of urban renewal projects. 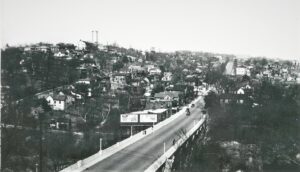 CAPTION: A 1930s aerial view of Union Street from the bridge looking east from State Street at “The Bottoms” a Black residential community that spanned southward on Central from Fifth Avenue to Neyland, and eastward from Central Ave. and below the Union St. bridge and rose across the crest of the hills of what is now Summit Hill and Howard Baker Drive, before the 1950s urban renewal. The Safety Building and Knoxville Coliseum now sits east of the stand of trees on the right side of what is now Howard Baker Drive. (Photo circa 1930s, courtesy of the Beck Collection.) To learn more about Knoxville’s Black history, visit Beck Center, or ETE American History.

The duties of the Task Force are to study, review, and identify strategic solutions to improve areas of disparity and disenfranchisement in the Black community, work with existing agencies in the community, and develop policy, programs and recommendations that will establish opportunities for generational wealth building in the Black community.

The Community Empowerment Department will work with the African American Equity Restoration Task Force to identify solutions and develop policy and programs that will establish opportunities for generational wealth building in the Black community.

In December 2020, Vice Mayor Gwen McKenzie proposed and City Council approved a resolution to invest $100 million over the next seven years in Knoxville’s Black neighborhoods, which were largely destroyed during urban renewal projects of the 1950s and ‘60s. The resolution called for the creation of African American Equity Restoration Task Force to oversee the investments, which will mostly come from grants.

Members of the Task Force were approved by City Council on Tuesday, July 27, 2021. It is comprised of 12 members representing business, community, financial, education, faith, healthcare, youth and city leaders. Members will serve a three-year term (limited to two consecutive terms) then a one-year break from serving.

Memphis native and former UT track and field athlete Matthew Best began his ministry career with InterVarsity Christian Fellowship at the University of Tennessee after graduating from UT with a degree in Journalism and Electronic Media. He stayed on staff with InterVarsity for more than seven years before joining Emerald Youth Foundation, where he primarily served high school students in East Knoxville. Best has been preaching locally at Children of God Ministries, where he has served as youth pastor since he was 19.

Strategist, analyst and community leader Tanisha Fitzgerald-Baker has spent most of her professional career in the educational arena focused on equity and access for those underserved and underrepresented from communities of challenging circumstances. The native Knoxvillian earned her B.S. in Actuarial Science from Florida A&M University and an M.S. in Education from UT Knoxville. Baker is a founding member and current president of the Five Points Up Community Action Group, a founding member of East Knox Lions Club, member of Volunteer Rotary of Knoxville, member of the steering committees for Eastside Sunday Markets and Community Voices Coalition and is on the board of directors for the YWCA. She received the “Woman 2 Woman” Community Outreach award from the Zeta Phi Beta Sorority, Inc. and the 2020 MLK Commission’s Award for Community Service.

Brandon Hardin grew up in Mechanicsville and East Knoxville, graduated from Austin-East Magnet High School. He earned a degree specializing in the study of aviation and business from Middle Tennessee State University. Currently a commercial airline pilot with Republic Airways, Capt. Hardin flew the KC-135 Stratotanker for several years to locations all over the world, flying missions in support of the Air Guard and United States Air Force. He is the founder and president of Joyce Development Inc. and owns several rental properties, mainly in the East Knoxville community. He volunteers with Big Brothers Big Sisters, Tuskegee Next, Knoxville Area Urban League, is a member of Kappa Alpha Psi Fraternity Inc., and serves on the Knoxville Botanical Garden board of directors.

Prior to serving as Chief Policy Officer and Deputy to the Mayor for the City of Knoxville under Mayor Rogero and Senior Advisor to Mayor Kincannon, William Lyons had a long career at the University of Tennessee as a Professor of Political Science, Director of UT’s Social Science Research Institute and Director of the Bureau of Public Administration. He authored many articles and textbooks, taught survey research and research methodology at the graduate level, conducted numerous surveys and made policy recommendations for Federal agencies, state, and local governments and nonprofit and profit organizations.

Memphis native Anderson Olds received his Political Science degree and MBA from the University of Tennessee in 2012 and 2019, respectively. He currently serves as Executive Director of the Haslam Family Campus with the Boys and Girls Club, overseeing the Regal Teen Center, Haslam Youth Facility and the Hollins Family sports complex. He also operates a Consulting company called 4Solutions Consulting that focuses on long-term strategic economic growth for startups, small businesses and nonprofit boards. As a board member, he serves Knoxville Fellows Initiative, the Zaevion Dobson Memorial Foundation and Girls on the Run of Greater Knoxville

Life-long Knoxville resident Regina Olum graduated from Austin-East High School and attended Knoxville College. Her passion to help young people has led her to mentor young girls ages 8-16 through Tea and Tiara, which she co-founded, and There is Good in the Neighborhood. When she’s not working as Supervisor for the Food Service Department at UT, she’s volunteering for Boys and Girls Club, Fair Garden Family/Community Center, Golden Age, Jubilee events and Emancipation Proclamation annual programs. For more than 20 years, she has been a part of the Improved Benevolent Protective Order of Elks of the World.

Deborah Porter is a native Knoxvillian and a graduate of Austin-East High School and the University of Tennessee. Presently, she works for the Tennessee Small Business Development Center and is retired from Knox County Government and the Tennessee Valley Authority. She’s been involved in the community for many years and serves on multiple community boards and projects, including Knoxville Branch NAACP; FAITH Coalition Chair; and Pellissippi State Community College’s Diversity, Equity, and Inclusion Council. She is Chair Emeritus of the Martin Luther King, Jr. Commemorative Commission and a Charter Member of the National Coalition of 100 Black Women. She is very active at Community Evangelistic Church where she serves as an Elder.

Knoxville native Stanley Taylor grew up primarily in KCDC housing and graduated from Rule High School, East Tennessee State University and UT Knoxville with a Master of Science in Social Work in 1985. He was a commissioned officer of the Army Reserves for six years, and he has more than 35 years of experience in micro practice; organizational consultation in leadership development with nonprofits; supervision of staff; program management; and operations management of small non-profits’ operations.

Enkeshi El-Amin uses her voice as a Co-host and producer for the Black in Appalachia Podcast and as lecturer at University of Tennessee, where she earned her PhD in sociology. Her research explores the link between race, place, and Black practices in defining, contesting and re-imagining of place. El-Amin founded “The Bottom” in East Knoxville as a hub to build community, celebrate culture, and engage in the creativity of black people. Through sharing resources, like the Bookshop at the Bottom and ongoing projects, like “Sew It, Sell It,” El-Amin has made a space to welcome people and amplify Black voices.