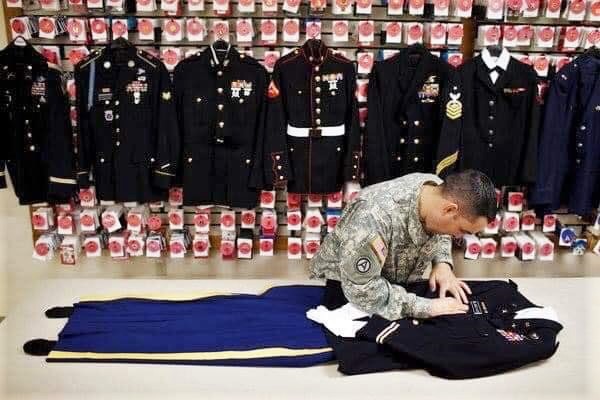 Staff Sgt. Miguel Deynes makes sure that every detail of a fallen soldier's uniform is perfect. This uniform is being prepared for a U.S. Army pilot who was killed in Afghanistan. (Posted in 2019)

Marine WO2 Sherman Gillums, Jr.
May 2019
This is a picture the Defense Department has never allowed the public to see until now. This is a behind-the-scenes look at Dover Air Force Base where the bodies of fallen service members are prepared for burial. That includes being properly dressed, all the way down to the smallest detail.

In this picture, Staff Sgt. Miguel Deynes is making sure the uniform is just right for a U.S. Army pilot who was recently killed in Afghanistan.

There is a very specific process once a fallen service member is returned home. The bodies are flown back to the United States on a cargo jet. A team of service members wearing white gloves carry the flag-draped coffins to a white van that takes them to the Armed Forces Medical Examiner.

The remains are washed, hands are scrubbed clean, and hair is shampooed. If necessary, the bones are wired together and damaged tissue is reconstructed with flesh-toned wax. Sometimes, they will use photos. Sometimes, they intuitively recreate the wrinkles in the faces and the lines around the mouth or the corner of the eyes.

“It has to look normal, like someone who is sleeping.”

Once the body is ready then the uniform is prepared. That includes putting medals earned by the soldier in the proper order on the ribbon rack above the uniform’s breast pocket.

During the height of the wars in Iraq and Afghanistan, 10 to 20 bodies were arriving every day.

The embalmers often worked all night to get the bodies home on time. This can take an emotional toll on them, so the mortuary has a large gym to allow workers to blow off steam. Many say they are haunted by how young the fallen soldiers are and by how many of them leave behind small children. That’s why Sgt. Deynes says they are advised not to do research into the backgrounds of the soldiers.

“If I knew the story of every individual who went through here, I would probably be in a padded cell.”

The dress uniform being prepared in this particular case will be in a closed casket. Even so, it will be perfectly tailored, starched and pressed. Everything will be checked down to the last detail.

Sgt. Deynes says, “[The family is] not going to see it. I do it for myself. It’s more than an honor. It’s a blessing to dress that soldier for the last time.”

Memorial Day is about these service members and the families they left behind.
#memorialday2019