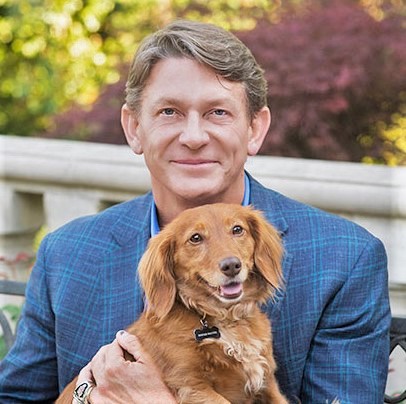 Randy Boyd, UT-Knoxville president and founder of a pet conglomerate under Radio Systems Corporation has been building dog parks across Tennessee for many years.

KNOXVILLE, Tenn. (September 14, 2020) — The Knox County Parks and Recreation Department plans to build 10 new dog parks within the next couple of years thanks to a grant program initiated and funded under the Boyd Family Foundation.

The non-profit Knox Neighborhood Dog Parks (KNDP) grant plan was established in 2020 to support animal welfare and youth education in Tennessee with intentions of making Knox County No. 1 in dog parks per capita in the nation. The county is currently ranked No. 29.

“Most of Knox County’s state-of-the-art dog parks exist because of the generosity Randy Boyd has shown this community for more than a decade,” Knox County Mayor Glenn Jacobs said. “It has long been a priority to ensure Knox County is a pet-friendly community. As a pet owner myself, I know these new park additions will move us even further down the path to becoming one of the most pet-friendly places in America.”

KNDP has committed $500,000 to grant each of the 10 dog parks $50,000 towards the building. Both Knoxville and Knox County mayors have committed to offering the land, labor and to cover costs exceeding the grant.

The contest kicked off in June 2020 when residents suggested nominations through the knoxdogparks.com website, followed by a social media campaign in July on Facebook using the hashtag #KNDP.

Harrison Forbes is the KNDP grant organizer and the dog park adviser to the Knox County Parks and Recreation department.

The foundation received more than 1,000 requests and votes from every zip code in the county. Under the terms of the grant, the parks must be completed within two years, although officials expect to open a number of those parks within a year, Forbes said.

About 1,000, from over 185,000 Knox County households, submitted requests for a new dog park. The winning Knoxville and Knox County communities are:

In addition to Knox Neighborhood Dog Parks, The Boyd Foundation’s Dog Park Dash has awarded 67 grants to communities all across Tennessee since 2018. Another 33 will be awarded in 2021, making a total of $3 million in grants for dog parks statewide. To apply to establish or to upgrade a dog park in your community; click Dog Park Dash.com to apply.

ABOUT: Randy Boyd is the president of the University of Tennessee, former commissioner for the Tennessee Department of Economic and Community Development. He founded Radio Systems Corporation in 1991 and has built a conglomerate of pet protection products that includes PetSafe, SportDOG, Invisible Fence Kurgo and Premier Pet brands. Based in Knoxville, manufacturing has been in China since 1993, a move that improved product quality, prices, and reliability. His wife, Jenny Boyd, is a local business owner and philanthropist who is also passionate about animal welfare. To learn more, visit the website here.