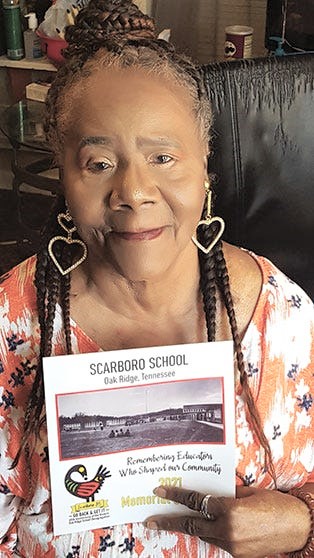 Ernestine Avery is one of the few living members of the Oak Ridge 85, who were the first to integrate a Tennessee public school in 1955. (Photo submitted by Rose Weaver)

This is one of those rare opportunities to learn of a historic event from someone who was there over 65 years ago!

OAK RIDGE, Tenn. (April 25, 2021) – Ernestine Avery was just 14 years old when she was sent to attend then segregated Oak Ridge High School. Avery was one of the Oak Ridge 85. In 1955, a group of 85 students became the first to integrate a school in the South.

“We didn’t know what to expect, but we went with it,” said Avery. “It feels good to tell about [that time] now… It’s a blessing. I am proud.” The surviving members of the Oak Ridge 85 are proud of their role in ensuring that Black students could get an education equal to whites.

The Oak Ridge NAACP chapter is hosting via zoom “A Conversation with Ernestine Avery” at 7 pm, Tuesday, April 27, 2021. The moderator will be Rose Weaver, an active, prominent community member.  Last year the Oak Ridge community celebrated the 65th anniversary of that historic event, a celebration that continues.

“We have a story that needs to be told because the 85 students that immigrated to school — the African-Americans — their legacy is going to be lost because they’re dying out, the stories are not going to be told,” said Rose Weaver, anniversary event co-chair.

Oak Ridge High School and Robertsville Junior High School in Anderson County were the largest and the first public schools in the South to be desegregated. On Sept. 6, 1955, the brave 85 students have been unrecognized, mostly because the integration was peaceful.

The public is invited to join the continued celebration and the live ZOOM conversation.