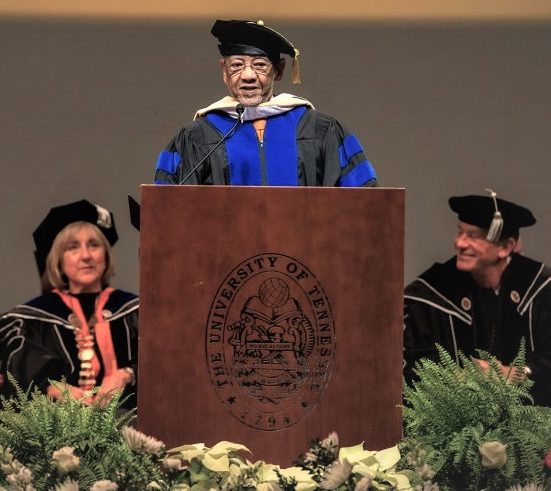 Theotis Robinson speaks at commencement in 2019 when he received an honorary doctorate in social work.

KNOXVILLE, TN (March 2021) – Theotis Robinson didn’t want the admissions office to know he was Black. So after graduating from Knoxville’s Austin High School, he left off the school’s name when he submitted his application to the University of Tennessee, Knoxville, in 1960.

They found out anyway.

The university announced that two residence halls will be renamed in honor of Robinson and Rita Sanders Geier, two African American trailblazers whose fight for equity and social justice transformed the state’s higher education system and the university. The Board of Trustees approved the renaming of Orange Hall for Geier and White Hall for Robinson at its winter board meeting on February 25. Both residence halls were constructed in 2016.

“Each of them broke barriers and showed so much courage to do it,” said Chancellor Donde Plowman. “Both of them are people who looked around at their world and said it can be better—we can be better. They moved the world forward.”

Robinson is well known as the first Black undergraduate student admitted to the university and one of three Black students to fully desegregate the university in 1961. Geier, a Memphis native, is best known for the landmark lawsuit that sought to dismantle inequities in the state’s higher education system. Both Robinson and Geier later worked for the university.

“Theotis really was that trailblazer who said this university should be open to everybody, and Rita said not only should it be open to everybody, but everybody should have equal access and equal opportunity,” said Tyvi Small, vice chancellor for diversity and engagement. “I really do see them in concert together, and so it’s appropriate that they’re named together.”

Small called both Geier and Robinson, with whom he has developed a close friendship over the years, to deliver the news. Both said they were surprised and honored.

“I couldn’t be prouder—not for me and my name—but the fact that we’ve come to this point to honor me and Theotis in this way,” said Geier.

“That’s the best part of the story, and it speaks very much to the success and change that’s happened in the university community,” she said.

The university acknowledged Robinson’s lifetime of work in advancing civil rights and propelling the university forward with an honorary doctorate in 2019.

“When I walk across the campus and I see Black students, I have a certain smile on my face and a certain feeling,” Robinson said. “The university has been a very interesting place for me, and it’s been very central to my life.”

Robinson, a Knoxville native, was involved in the lunch counter sit-in movement during his senior year of high school. When his application to UT was denied, he first met with two deans and then-President Andy Holt. Holt said it was a matter for the Board of Trustees, and Robinson said he planned to sue if the policy did not change.

“They brought the state attorney general to the board meeting to ask him if he thought he could win such a lawsuit, and he informed them that given the way case law was being established across the South as it related to public higher education, that he did not think he could win this case,” Robinson said. “They discussed it further and said I met all the qualifications to be admitted except the one on race, so they voted to change the policy and I became the first African American student admitted to the undergraduate school.”

After he was admitted to UT, Robinson continued the fight for equality with other students, negotiating with local businesses to desegregate. Later Robinson became the first African American elected to Knoxville City Council since Reconstruction and served as vice president for economic development for the 1982 World’s Fair. He eventually returned to the university as a political science lecturer. He worked on staff in the purchasing department and in the Office of Federal Affairs before serving as the UT System’s vice president for equity and diversity from 2000 until 2014.

During his time as vice president, Robinson was charged with overseeing the university’s compliance with the Geier Consent Decree, an outcome of the lawsuit Geier filed against the state in 1968 when she was a faculty member at Tennessee State University, the state’s only public historically Black university. In the lawsuit, Geier and four other plaintiffs accused the state of maintaining two separate higher education systems.

The litigation continued over decades before the consent decree—an agreement reached through mediation—was issued in 2001. It included an infusion of funding to improve facilities at Tennessee State and create scholarship programs aimed at increasing African American enrollment at the state’s other public universities, including UT. Though the consent decree was lifted in 2006, UT’s scholarship programs remain and continue to provide broader access to the state’s flagship university.

“I saw the injustice and I also saw the potential for changing it. I was young enough and idealistic enough to think I could do that,” Geier said. “I think opportunity meets you, and the only thing that is required of you is to have your eyes open and to take advantage of the opportunity.”

Plowman said she too hopes future students are inspired by the legacy that Geier, Robinson, and others have left.

“I’m grateful for people who are willing to remind us that there’s a better version of ourselves,” Plowman said. “I hope that’s what people see when they see their names on those buildings.”

(This article was first published in UTK Campus News on February 25, 2021)