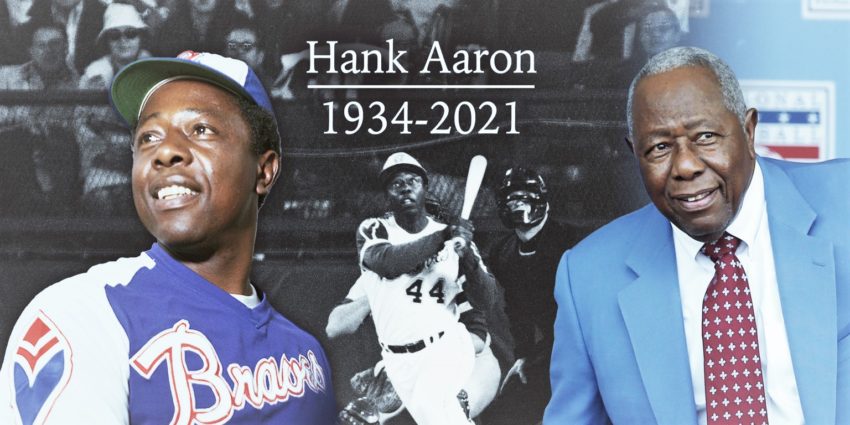 Henry Louis "Hank" Aaron (1934- 2021), civil rights advocate, philanthropist, and legendary baseball player who endured death threats to not be his best and break the home run hitting record of the famed Babe Ruth, but did it anyway.

NPR (January 22, 2021) – Hank Aaron, seen as a hero for shattering Babe Ruth’s home run record and also for his longtime advocacy for civil rights, has died. “Hammerin’ Hank” was 86. The Atlanta Braves confirmed his death on Friday.

“We are absolutely devastated by the passing of our beloved Hank. He was a beacon for our organization first as a player, then with player development, and always with our community efforts,” Braves chairman Terry McGuirk said.

Because of his skill and power at the plate — Aaron batted in more than 100 runs in a season in three decades — Major League Baseball named its award for the best offensive player after him.

Henry Louis “Hank” Aaron was born in Mobile, Ala., in 1934. As news of his death spread, Alabama Gov. Kay Ivey ordered flags be lowered to half-staff.

The Governor cited Aaron’s ability to inspire boys and girls to pursue excellence in their own lives, Ivey said, “Alabama is incredibly proud of our native son, and his legacy will forever be etched in history.”

“Hank Aaron was one of the best baseball players we’ve ever seen and one of the strongest people I’ve ever met,” former President Obama said in a statement. “Whenever Michelle and I spent time with Hank and his wife Billye, we were struck by their kindness, generosity and grace — and were reminded that we stood on the shoulders of a previous generation of trailblazers.”

Aaron started his career in 1954, playing for the Milwaukee Braves. The franchise moved to Atlanta for the 1966 season, and that’s where Aaron broke Ruth’s hallowed record by hitting his 715th home run in 1974.

“A Black man is getting a standing ovation in the Deep South for breaking a record of an all-time baseball idol,” Scully added. “And it is a great moment for all of us – and particularly for Henry Aaron.”

Scully noted that in addition to his Braves teammates, Aaron’s mother and father ran to meet him at home plate.

Known for his stoic public demeanor — and also for being a proud competitor — Aaron faced immense pressure as he strove to surpass Ruth’s hallowed home run record that dated to the 1930s. He also faced a racial backlash.

As a Black man who was threatening to put his name above the iconic Ruth in the record books, Aaron received enough hate mail and threats that his family was protected by the FBI.

“Y’know it wasn’t a very happy time,” his Atlanta teammate and friend Dusty Baker told NPR in 2007. “It wasn’t nearly as happy as it should’ve been.”

When Aaron headed to the plate where he would make history, Baker recalled him saying, “I’m tired of this, I’m gonna get it over with.”

In addition to his phenomenal ability on a baseball field, Aaron was famous for advocating for civil rights. He often used his own life story — he went from being born poor in the South to receiving the Presidential Medal of Freedom — to discuss the challenges of overcoming racial inequality.

“We have moved in the right direction, and there have been improvements, but we still have a long ways to go in the country,” Aaron said in 2014. “The bigger difference is that back then, they had hoods. Now they have neckties and starched shirts.”

Aaron retired in 1976, after hitting 755 home runs during his pro career. That mark stood for more than 30 years before Barry Bonds set a new record. Bonds finished his career with 762 home runs, said on Friday that the world has lost “an icon, a legend, and a true hero.” (Bonds record came during the emergence of steroid use, and has been challenged.)

Aaron hit .305 over his career, accounting for 2,297 runs batted in and 6,856 total bases — both of which remain all-time MLB records. After his retirement, the widely respected player became an executive for the Atlanta Braves, working in player development and other areas.

“He spread his grace on everything and everyone he came in contact with,” former Brave Chipper Jones said. Noting the challenges Aaron faced in his lifetime, Jones called him the “epitome of class and integrity.”

MLB Commissioner Emeritus Bud Selig, a longtime friend of Aaron’s, also issued a statement about losing him. “Not long ago, he and I were walking the streets of Washington, D.C., together and talking about how we’ve been the best of friends for more than 60 years,” Selig said. “Then Hank said: ‘Who would have ever thought all those years ago that a black kid from Mobile, Alabama, would break Babe Ruth’s home run record and a Jewish kid from Milwaukee would become the Commissioner of Baseball?'”

Aaron’s death comes as the Braves organization and its fans were already mourning the loss of Don Sutton, who became a longtime TV and radio announcer for the team after a Hall of Fame pitching career. 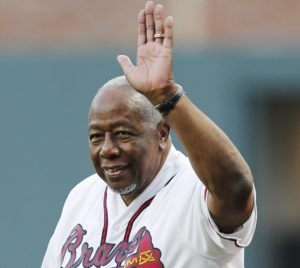 Along with baseball, Aaron also found success in the business world — and through his philanthropy, he sought to help others. His Hank Aaron Chasing the Dream Foundation began providing grants and scholarships to young people in the 1990s. He and his wife, Billye, also donated $3 million to the Morehouse School of Medicine in Atlanta.

“You were more than an athlete,” the Martin Luther King, Jr. Center said in remembrance of Aaron. “Your leadership transcended sports. And we are grateful for your courage and commitment to the freedom struggle.”