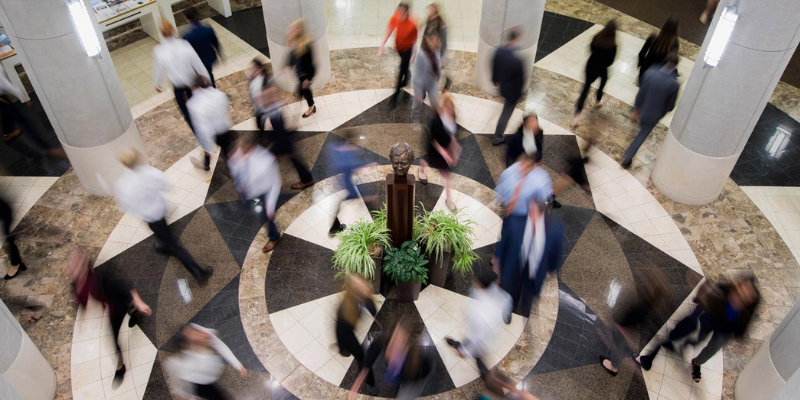 Inside of the main entrance of the Howard Baker Center on UT campus.

Election commissioners decide where polling places should be; how long polls should stay open; what accommodations should be provided to voters; they review rejected ballots and voter registrations, and they approve poll workers and poll watchers.

As the country grows more and more divided, the Knox County Election Commission has managed to maintain an appearance of bipartisan collegiality. Until now.

On October 2, 2020, the Election Commission denied an offer by the University of Tennessee-Knoxville and Chancellor Donde Plowman to utilize Thompson Boling Arena as an early voting site, replacing the Howard Baker Center which has traditionally been an early voting site with limited dates, hours and a parking fee. (Former Administrator Cliff Rodgers would often quip that UT students did not need expanded early voting hours because if they can come downtown to drink, they can come downtown to vote). A smear on UT students and the downtown businesses they support and is apparently still shared by the majority Republicans of the Election Commission.

UT’s offer was more important this year than any other due to the COVID-19 pandemic. Thompson Boling offers voters better accessibility, more, better and free parking, room to social distance, multiple entrances and exits to manage the flow of voters, and an iconic, recognizable location that many Knoxvillians, would flock to to vote. Therein lies the problem.

The Election Commission has done its best to present the image of bipartisan collegiality. But that changed when, in the face of public comments supporting the relocation of early voting to Thompson Boling, the Election Commission rejected the offer in an embarrassing and disappointing 3-2 partisan display.

To be fair, the commissioners flung praise at UT and Chancellor Plowman, and they even suggested that “Thompson Boling might be a suitable site for future elections.” But they ultimately chose to deny voters – the citizens of Knox County – a safe and accessible place to vote for fear that it might hurt Republicans at the ballot box. In fact, the Republican commissioners that rejected the offer had their minds made up before the meeting even started.

Ask yourself why would they reject UT’s offer and let me know if you can come up with a different reason. It is the same playbook used by Republican politicians across the country to disenfranchise voters and violates our basic sense of fairness. It is partisan hackery. I thought the Knox County Election Commission was insulated from it. I was wrong.

Luke P. Ihnen is an attorney and resident of Knoxville, Tennessee. He is the Chair of the Knox County Democratic Party Election Integrity Committee. He can be reached at info@knoxvilledemocrats.org.

(OP-ED is a format the East Tennessee Enlightener offers to our readers to be heard and express their view on relevant subjects. The views are those of the writer and do not always represent the position of the ETE.)