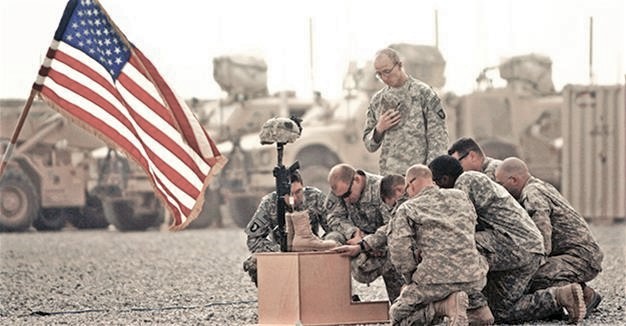 U.S. troops in Afghanistan perform a ritual over the armor (helmet, gun, and boots) of a recently fallen comrade whose remains will be returned to loved ones in the United States of America.

Nineteen years after the attacks of 9/11, some American veterans of the war in Afghanistan wrestle with the idea that Pres. Trump’s pull-out of U.S. troops was born out of a deal struck, with the enemy, more than 2,400 of their brothers and sisters were sent home maimed, traumatized, and died fighting for. 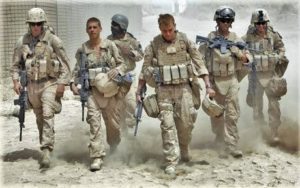 KABUL, Afghanistan – The troop withdrawal, which is supposed to be completed by next summer, will not be the result of military victory but of a deal struck with the Taliban in February, and that sticks like a bone in the throats of some of the veterans. But others say the time is long past for the U.S. to be out of its longest war.

“We need to finally get the hell out of that country and send everybody home,” said Tim Patterson, a former Navy officer who mentored Afghan police. “Our ongoing presence in Afghanistan, with no clear purpose, is a waste of lives and money.”

Just over 2,440 American service members have been killed in action in Afghanistan in nearly two decades of war, which started when the U.S. invaded the country in October 2001, to destroy al-Qaida after the 9/11 attacks and oust the Taliban, who had harbored the terrorist group.

Army Staff Sgt. Séamus Fennessy, who fought in Ghazni province in 2010, said he feels a range of emotions — none of them positive — about the peace deal with the Taliban. While he is proud of what he and his fellow soldiers did in the country, those feelings are blurred by his anger toward leaders who have allowed the sacrifices of thousands of U.S. soldiers to go to waste, and by mistrust, worry and rage over the peace deal.

“That the soldier in question, alive or dead, did their job — they won the battle on the ground, as they were trained to do — there is comfort in that,” Fennessy said. “But simultaneously, there is a sense of bitterness against the politicians and bureaucrats for big-picture incompetence.”

For Kristen Rouse, a logistics officer who deployed to Afghanistan in 2006, 2010 and 2012, it’s difficult to square the images of Taliban leaders posing for photos at a luxurious Doha hotel as they hammered out the peace deal with the Americans with “the evil they committed against innocent civilians.”

And after almost two decades of war, it was hard to figure out what had been accomplished, Rouse said.

“I honestly can’t speak to the overall tactical wins or losses, or whether that is what this conflict has even been about in the end,” she said. “I think for many of us, we have stories of scenes and incidents that happened — a lot of tragedy and what can feel like wasted efforts.”

U.S. troop levels in Afghanistan have dropped from around 13,000 to below 9,000 service members since the February deal with the Taliban. President Donald Trump wants that number to be below 5,000 by Election Day.

If the Taliban hold up their end of the peace deal and prevent al-Qaida and other terrorist groups from using Afghan soil to train or recruit fighters to launch attacks on the U.S. or its allies, the February deal would be worth some of the American sacrifices made, said Army 1st Lt. Eric Jungels, who deployed to Kunar and Nuristan provinces in 2006.

“After nearly two decades of war, perhaps we’ve finally achieved what we had set out to achieve, which was to decimate a breeding ground for terrorism,” said Jungels, now with the Minnesota National Guard.

“For all those who lost their lives and suffered as a result of this conflict, I hope that is the case.”

But the deal has so far not produced many of the results it was supposed to, at least on the Afghan side. While the U.S. is ahead of schedule on the troop drawdown, talks between the Taliban and Afghan government, which were supposed to begin within days of the deal’s signing, have still not gotten off the ground, and the Defense Department has said the Taliban still has close ties to al-Qaida, despite assuring the U.S. they would disavow the terrorist group in exchange for the troop withdrawal.

Add to that the fact that the Taliban has stepped up attacks on Afghan troops since the deal was signed, and it’s little surprise that lawmakers in Washington have questioned how the U.S. plans to ensure the group will comply with the peace terms after U.S. and other foreign troops leave.

Many veterans share that skepticism, saying the Taliban can’t be trusted to fulfill the promises they made to the U.S.

Fennessy said he thinks the militants signed the Doha deal primarily to get U.S. forces out of the country before they stage an armed takeover.

If that is the case, and if Afghanistan is allowed to fall apart after the U.S. leaves, the deaths on 9/11 and during America’s longest war will have been in vain, he said.