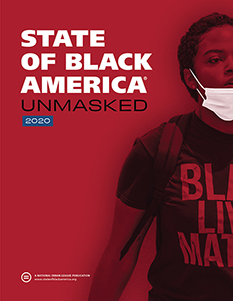 First issued in 1976, the State of Black America® is one of the most highly-anticipated benchmarks and sources for thought leadership around racial equality in America across economics, employment, education, health, housing, criminal justice and civic participation. Each annual edition contains penetrating commentary and insightful analysis from recognized authorities and leading figures in politics, the corporate and tech sectors, the nonprofit arena, academia and popular culture.

The 2020 State of Black America®, Unmasked, matches the national mood for serious introspection, exposing the human toll and economic devastation of a global pandemic on Black America while laying bare the deep rooted inequities in the death of George Floyd that predated the pandemic and accelerated the spread of the deadly virus.

America in 2020 is an America unmasked. The world-wide coronavirus pandemic upended every aspect of American life and exposed the naked face of institutional and interpersonal racism.

While there are endless lessons to be learned from this era of COVID-19, here are 19:

1 / Racism is the pandemic within the pandemic. The massive demonstrations against police racism and brutality that erupted after George Floyd’s death did not lead to spikes in coronavirus infection as many had feared. Those who went to protest were willing to accept the risk of being killed by a disease over systemic racism, or the police.

2 / Bias in health care is both explicit and implicit. Black people with COVID-19 symptoms from February 2020 were less likely to get tested or treated than white patients. Doctors downplayed the symptoms of Black patients’ and sent them back home, which spread the virus among friends and family members.

3 / Leadership matters. States where governors ignored scientific advice and lifted stay- at-home orders and other safety measures saw dramatic spikes in coronavirus infections. Across the country, the actions—and inaction—of state leaders are directly linked to the health and economic impact of the pandemic.

4 / Americans have enormous capacity for compassion. College students volunteered to replace sidelined Meals on Wheels drivers. Owners of empty RVs offered them to health care workers who needed to isolate. Wealthy celebrities and ordinary Americans alike donated laptops for school children, bought meals for essential workers, and chipped in to pay their neighbors’ bills. Amid the despair, acts of kindness shone through.

5 / #BlackLivesMatter. Millions of Americans have taken part in demonstrations for racial justice, making Black Lives Matter the largest protest movement in U.S. history. Monuments celebrating white supremacy have come down. Mississippi is dropping the Confederate flag. Washington’s football team has dropped its racist logo and name. The rage in response to police killings was like a match dropped into the powder keg of grief created by the pandemic. The American people are seeing—many for the first time—the stark and deadly results of racism on an enormous scale.

6 / Black communities never fully recovered from the Great Recession. Even at record lows, in recent years the Black unemployment rate consistently remained twice as high as the rate for whites. The Great Recession wiped out 50 years of rising Black communities and homeownership. Today’s rate is as low as it was before the Fair Housing Act. The net worth of a typical Black family is about one-tenth that of a white family.

8 / Essential workers, disproportionately people of color, are undervalued. Millions of low-wage essential workers risked their lives on the COVID-19 frontlines for a median pay of $13.48, according to the Brookings Institution. Twenty percent of them live in poverty and more than 40% rely on public assistance. A national living wage tied to inflation is long overdue.

10 / Lax firearms laws increase the risk of violence, and Black communities pay the price. The nation needs a comprehensive gun safety plan. Americans purchased millions more guns in 2020, leading to a surge in gun violence. Purchases have been higher in states with greater levels of racial animus that have led to assaults on black and brown people. Many of these gun sales were without background checks, a system for safe handling and storage that has also contributed to the number of deaths of children playing at home.

11 / Election systems need an overhaul. The danger of coronavirus means more Americans need access to absentee voting, extended early voting. Some states are limiting access to the polls causing voters to stand in line for hours. The voting process is overdue for a 21st century update.

12 / “Grassroots” is often Astroturf. Armed protesters storming state capitols demanding an end to stay-at-home orders are organized by wealthy political patrons encouraging the myth that coronavirus is a hoax and shutdowns are a political conspiracy. The misinformation fueing these dangerous crusades flourishes on social media. Tech companies need to do more to stop it.

13 / Police culture must be dramatically reimagined and reformed. Derek Chauvin appeared neither deterred nor concerned that he was being recorded as he crushed George Floyd’s neck with his knee. In the weeks of protest that followed, police repeatedly used excessive force and unauthorized methods against demonstrators, fully aware of the cameras trained on them. Officers have rarely been held accountable for misconduct. Legislation pending in Congress could change that, but police departments must commit to a transformation of the relationship between officers and the communities they serve.

14 / Workers need fair unemployment insurance. From the moment businesses began shutting down, policymakers recognized that the unemployment insurance program administered by individual states would not be sufficient to keep workers afloat and added a one-time payment and a $600-per-week supplement. Administrative burdens keep 20% to 30% of eligible people from accessing benefits, and many people have waited months for payment.

15 / #SayHerName! Even as support for the Black Lives Matter movement skyrocketed in 2020, justice for Black women victims of police violence lagged. Months after Breonna Taylor was killed by police executing an illegitimate warrant and firing “blindly” into her home, no arrests had been made. Black women victims of violence are too often overlooked and forgotten.

16 / Coronavirus intensifies the threat of a Census undercount. The National Urban League’s State of the 2020 Census report in June warned that Black communities stand to lose billions of dollars and their rightful political representation if something is not done quickly to overcome delays caused by the pandemic. The National Urban League has urged an audit of Census operations to ensure a safe and accurate count.

18 / Cities are the nation’s economic engines. The disproportionate impact of COVID-19 on America’s cities has shone the spotlight on the nation’s dependence on cities’ economic health. We can’t have a prospering nation unless our cities, large and small, are able to provide the services that keep our industries running.

19 / Mayors are driving the recovery. Absent leadership on the federal and state level has been left to the nation’s city and county mayors to develop and enforce policies aimed at bringing the pandemic under control and keeping businesses and workers afloat. In the wake of George Floyd’s killing, Black women mayors, in particular, have taken the lead in speaking out against the brutality and protecting the safety of their communities.

To view the full report and speakers click here.