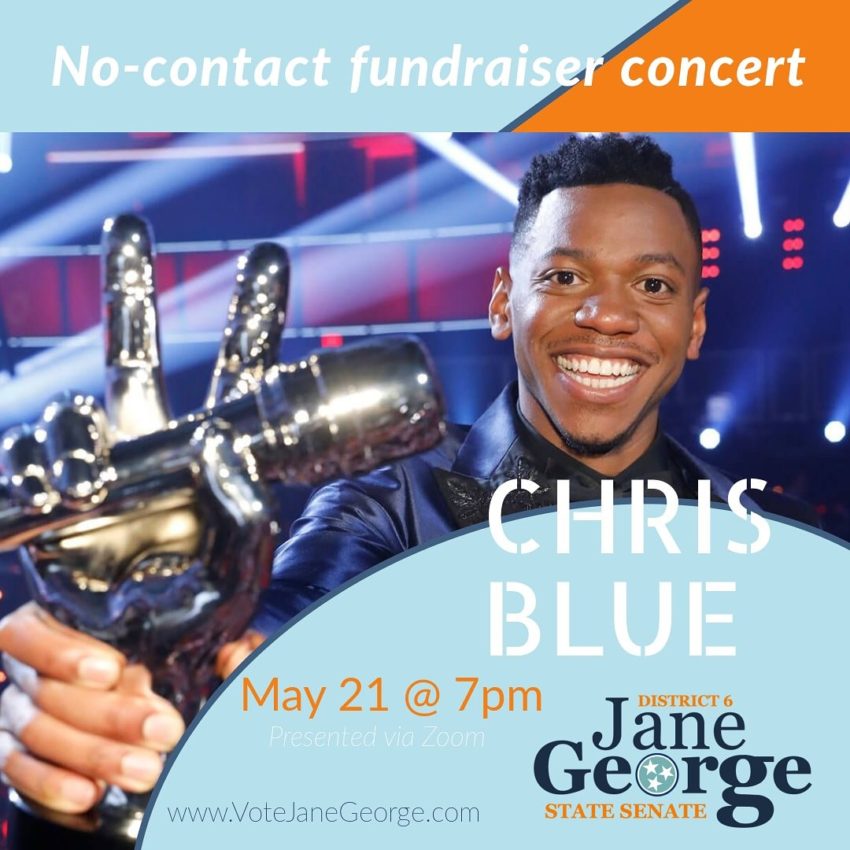 KNOXVILLE, TN – It isn’t every day that a candidate for state office throws a gala fundraising event by encouraging everyone to stay home. But that’s exactly what Jane George, the District 6 candidate for Tennessee State Senate, is doing in what may be a first for a political event.

George will present a no-contact dinner and concert on Thursday May 21 that will allow contributors to enjoy the party from the comfort of their own living rooms. Entertainment will be provided by Chris Blue, Matt Honkonen, and Sam Thomas with a meal provided by Yassin’s Falafel House. The food will be delivered straight to event attendees’ doors, with the concert streamed over the internet. Proceeds from the event, which are a political contribution, support the Jane George campaign for State Senate.

The event will be Thursday, May 21 at 7:00 pm. Tickets to the event range from $50 to $250 and include payment to each participating musician and business as well as a donation to the Jane George campaign. Vegetarian and gluten-free options are available. To secure tickets, visit www.actblue.com/donate/chrisblue  For more information please mail nathan@votejanegeorge.com or text him at 865-936-4038.

Knoxville’s Chris Blue became an international sensation as the winner of the hit NBC series The Voice, season 12.  The youngest of seven children, he first took to the stage in a family band at five-years-old and by the age of twenty he developed a burgeoning solo career that had seen him grace stages across the U.S., Virgin Islands, Jamaica, and the U.K. It surprised no one when he emerged the victor of season 12, with mentor Alicia Keys behind him all the way.  Following his victory, Chris inked a deal with Republic Records and immediately entered the studio to commence work on what would become his forthcoming full-length debut for the label.

Dinner will be provided by Yassin’s Falafel House, which has gained national notoriety after being selected by Reader’s Digest Magazine and Good Morning America voters as the “Nicest Place in America.” The restaurant was founded by Syrian refugee Yassin Terou on a shoestring budget and has grown to encompass two stores and a catering location. The restaurant’s motto: “Welcome all sizes, all colors, all ages, all sexes, all cultures, all religions, all types, all beliefs, all people, safe here at Yassin’s Falafel House.”