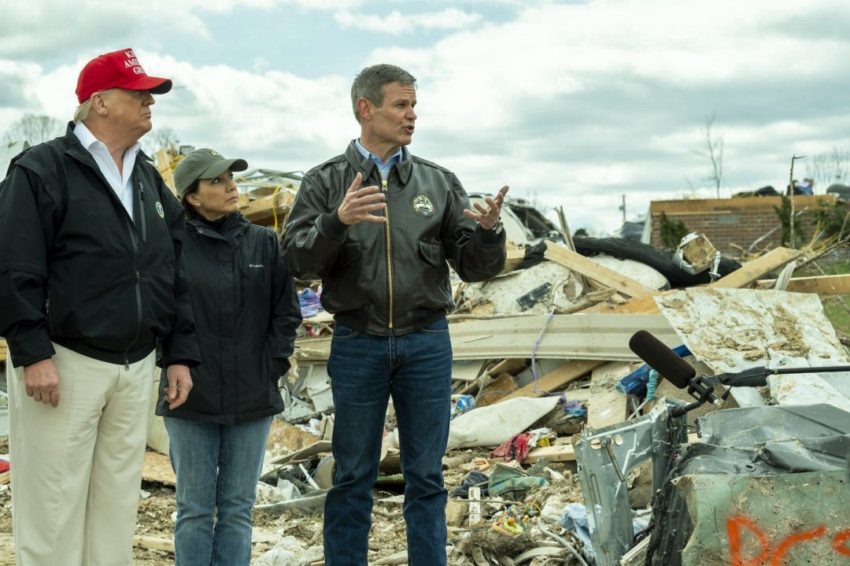 Gov. Bill Lee and his wife, Maria, with Trump on a March 6 tour of tornado damages in parts of Middle Tennessee on March 4, 2020. PHOTO CREDIT: TN.gov

KNOXVILLE, TN (March 18, 2020) – Gov. Bill Lee’s administration unveiled a revised budget plan on Wednesday, March 17, that cuts the proposed increase for teacher pay in half and cuts most of the education initiatives he announced before the coronavirus created a public health emergency in Tennessee.

How is it that a natural state and a national emergency can affect a state’s proposed school budget? After the tornado, Covid-19, the needs that were there before were not washed away, they are more needed than before.

Gone is the $250 million trust fund that the Republican governor proposed to support and grow mental health services for students in the state’s highest-risk schools.

Lee retained $38 million for education savings accounts, a controversial program set to start this fall to let eligible families in Memphis and Nashville use taxpayer money to pay for private school tuition.

The bare-bones spending plan is expected to move quickly through committees as the General Assembly seeks to pass a state budget — its only constitutional requirement — before recessing by the end of the week.

“At this point, we want to hold back on all large expenditures,” House Education Committee Chairman Mark White said Tuesday night as the budget was being reworked. “We may have to hunker down and use more funds to support the livelihood of Tennesseans affected by these emergencies.”

Lt. Gov. Randy McNally echoed that attitude on Wednesday. “This proposed budget ensures Tennessee will be in a posture to respond to the fallout and provide the essential services all Tennesseans count on,” he said in a statement.

Lee made K-12 education the centerpiece of the spending plan he unveiled Feb. 3 during his State of the State Address, including $650 million in new dollars — even more than the half-billion-dollar federal award Tennessee received in 2010 as part of the Race to the Top competition under President Barack Obama.

But in recent weeks, priorities have changed as Lee declared states of emergencies both for deadly tornadoes on March 4 and the ongoing spread of COVID-19.

The budget overhaul includes a new fund with $150 million to cover health and safety issues related to the pandemic, plus $350 million for the state’s “rainy day” fund for anticipated economic challenges due to business shutdowns.

“We are now likely embarking on a recession caused by this rare health pandemic,” Finance Commissioner Stuart McWhorter told the Senate finance committee on Wednesday. “Clearly, we are in a time of recovery, a time of preparedness, and a time of many unknowns.”

Asked by Senate Minority Leader Jeff Yarbro whether extended school closures could affect if and how teachers will be paid, McWhorter said Lee’s administration is “sensitive and aware of that issue” as it faces “some really tough decisions.”

“We want to make sure that we’re treating people fairly and understand that teachers who are not in the classroom teaching [should not be] penalized for that,” McWhorter answered.

The new budget proposal, which makes about $400 million in reductions from Lee’s original plan, still sets aside $58.7 million more for teacher pay, half of what Lee proposed last month. That equates to an increase of 2%.

As for other cuts, Education Commissioner Penny Schwinn said it’s prudent now to take investments in reading, mental health, and school turnaround work off the table from her 5-year strategic plan unveiled in November.

“The Department of Education will remain laser focused on supporting districts, schools, teachers, and students during these challenging times,” Schwinn said in a statement.

The legislature plans to reconvene on June 1.