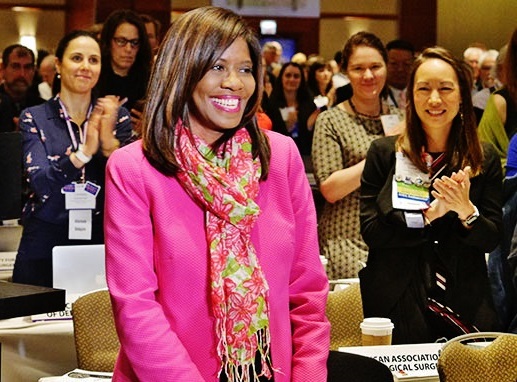 Dr. Patrice Harris was elected as the 174th President of the American Medical Association. She is the first Black woman in that position. Photo patriceharrismd.org

(BOTWC staff – June, 2019) Dr. Patrice Harris shattered a glass ceiling in the medical industry. On June 11, 2019, she was officially sworn in as the 174th President of the American Medical Association, making her the first Black woman in that position.

In her inauguration speech, Dr. Harris reflected on the shoulders upon which she stood to reach this position within the AMA.

“It’s truly a dream come true to stand before you tonight,” she said. “A dream my ancestors, parents, my extended family, and my friends supported before it even entered my imagination. A dream my West Virginia, Georgia, psychiatry and AMA families helped me achieve. And I know in my heart that, tonight, I am my ancestors’ wildest dreams.”

A native of West Virginia, Dr. Harris blazed trails and acquired invaluable experience beyond her white coat years before her presidency.  In 2016, she became the first African American woman to lead AMA’s Board of Trustees. She also served on the board of the Medical Association of Georgia’s Council on Legislation, its Committee on Constitution and Bylaws, and its Membership Task Force. She was also the president of the Georgia Psychiatric Physicians Association, as well as the founding president of the Georgia Psychiatry Political Action Committee.

As a Black woman, she is keenly aware of and equipped to address, challenges within the medical field that uniquely affect marginalized communities.

When she isn’t seeing patients at her private practice, attending a board meeting or working to improve policies and laws, Dr. Harris is empowering the next generation of doctors in the classroom. According to a statement released by the AMA, she is also “an adjunct assistant professor in the Emory Department of Psychiatry and Behavioral Sciences and an adjunct clinical assistant professor in psychiatry and behavioral sciences at Morehouse School of Medicine.”

She plans to continue her private practice in Atlanta as well as her role as chair of the AMA Opioid Task Force.