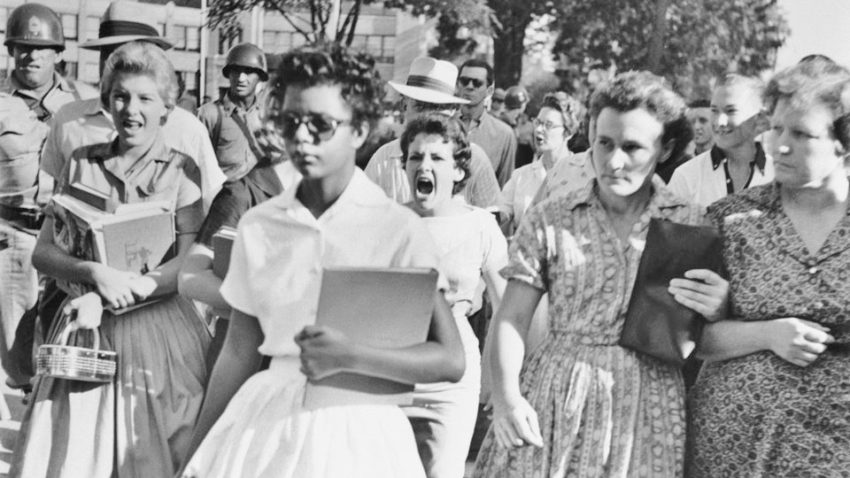 The short walk of the Clinton 12 to go to high school was escorted by National Guardsmen, seen in the far left, and met daily by angry mobs of adults and students. (circa 1956)

The Clinton 12 Commemorative Walk, Monday, August 26, 2019 at 10 a.m. The remaining 8 living members of the Clinton 12 and other dignitaries will walk from Green McAdoo Cultural Center (the former Green McAdoo School) to Clinton Middle School (the former Clinton High School), to honor the actions of the 12 high school students and supportive community members who braved threats of violence to integrate Clinton High School, making it the first public high school in the South to desegregate.

Clinton Middle and Elementary School students will line West Board and North Hicks Street and will join the procession to Clinton Middle School gymnasium where a program is planned.

Honored guest will include the remaining eight members of the Clinton 12, representatives of the 4 deceased members. U.S. Senator Lamar Alexander, U. S. Representative Chuck Fleischmann, and Tennessee Lt. Governor Randy McNally are scheduled to attend.

What you need to Know:

This is a rain or shine event. 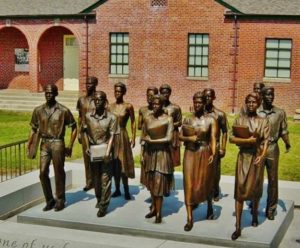 Photo caption: The statue of the Clinton 12 erected in front of the Green McAdoo Cultural Center (formerly Green McAdoo School for blacks), in Clinton, TN. that depicts their historic walk to desegregate the high school which was just down the street. Up to September 1956, Clinton’s black high school students were bussed to the black high school in Knoxville – Austin High that is now Vine Middle School.