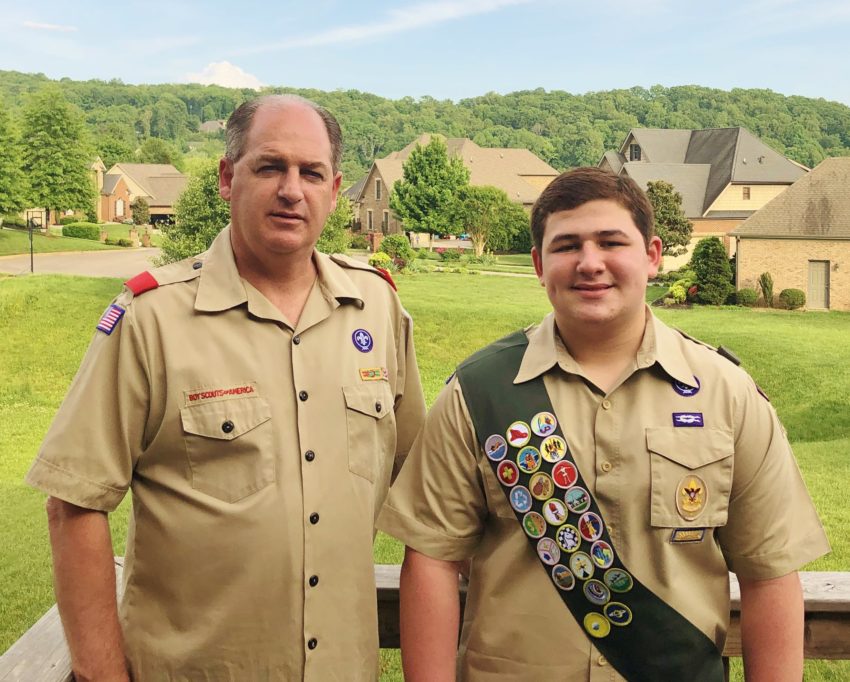 Scouting is a lifestyle for Mike Berry and his son Max whose American Eagle Scout project honored the life of their family's matriarch who recently passed away. Photo submitted)

(KNOXVILLE, TN) Scouting is a family tradition in the Berry family. Mike Berry is dedicated to scouting, and so is his son Max Keomalu Berry who is a member of Smoky Mountain Boy Scout Council Troop 40.

Max is a 15-year old student at Hardin Valley Middle School who has worked through the ranks of scouting to the opportunity to earn the highest rank of American Eagle Scout. Then his grandmother who lived in Memphis, Rebecca Rickard passed away in April.

Although Max had lost his grandmother, he did not want her to be forgotten. Rickard was buried in Piney Grove Cemetery in East Tennessee. Although he could visit her gravesite he wanted others to be able to acknowledge her life.

Max turned his grief into a project of pride and honor. He learned about BillionGraves from his cousin, who did a similar Eagle Scout Project in Memphis. Max decided that he would honor his grandmother by digitally documenting her earthly existence in perpetuity.

For his American Eagle Scout service project, Max decided that the friends and families associated with all of the headstones at Piney Grove Cemetery deserved the same respect.

Max with over a dozen of his fellow scouts and friends used their smartphones to take pictures of over 900 gravestones in the cemetery. The images were uploaded to a free app BillionGraves, where the information is documented and made available to future generations and anyone using the world-wide-web.

Max’s grandmother passed away, but she and many others are recorded for all in perpetuity.