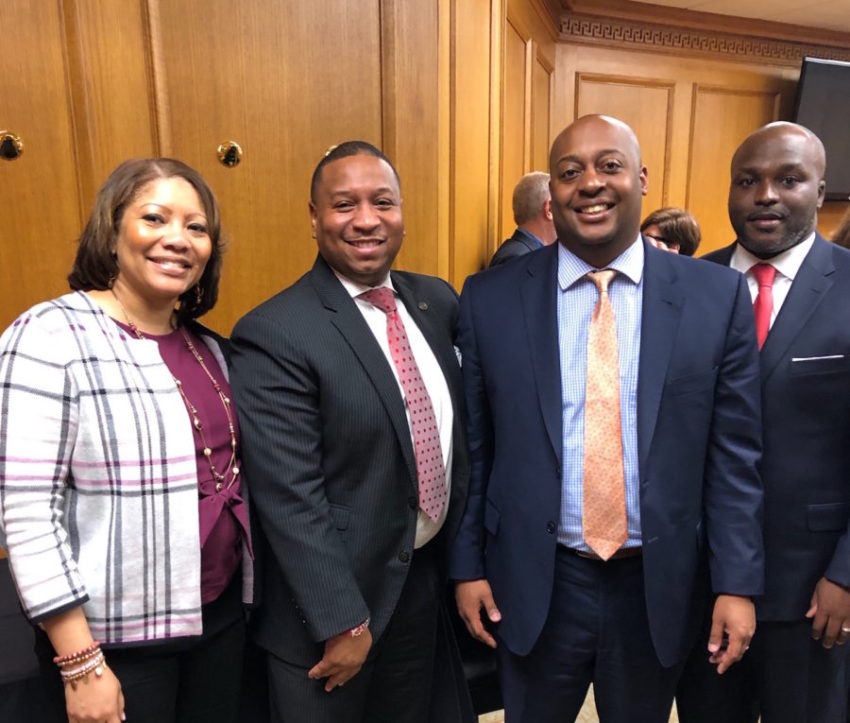 Superintendents or interim directors from four districts attend an April 16 meeting at the state Capitol with Gov. Bill Lee to discuss his education savings plan. From left: Adrienne Battle of Nashville, Joris Ray from Memphis, Eric Jones from Jackson, and Bryan Johnson of Chattanooga (Photo courtesy of Shelby County Schools)

In a joint press release, Shelby County Schools and Metropolitan Nashville Public Schools said voucher bills that passed last week in the House and Senate violate Tennessee’s Constitution because they apply to a limited number of districts with low-performing schools. They called both plans for starting education savings accounts — a newer kind of voucher that allows families to use taxpayer money to pay for private education services — arbitrary and unfair.

“If the ESA bill becomes law, Shelby County Schools and Metro Nashville Public Schools stand prepared to evaluate and pursue all legal remedies that ensure that the constitutional guarantees of equal protection under the law remain intact for the children and families of our districts and state,” the release said.

The threat from Tennessee’s two largest school systems came the week after the House and Senate approved separate voucher bills in historic votes in the General Assembly. While the state has an education savings accounts program for some students with disabilities, voucher legislation of this magnitude has never before passed in both of the legislature’s chambers.

But to get the bills through the legislature, both target only urban districts that have schools in the state’s bottom 10% of academic achievement. The House bill would apply to students and school systems in Memphis and Nashville, while the Senate bill would cover districts in Knoxville and Chattanooga as well. Those dueling bills are likely to head to a conference committee this week in an effort to be reconciled.

Even if that happens and Lee eventually signs the legislation into law, school leaders in Memphis and Nashville say it runs afoul of the Tennessee Constitution because of an “arbitrary application” to the urban districts while excluding school systems in Madison and Fayette counties with a larger or similar percentage of schools performing poorly.

“The legislation also applies to only certain districts with priority schools from the state’s 2015 priority school list,” the release notes, “even though there is a more current list from 2018 that includes schools in Campbell, Fayette, Madison, and Maury counties.”

A spokeswoman for the governor was dismissive of the districts’ concerns.

“Baseless legal threats distract from the real mission of the education savings account proposal which is giving our children every tool to succeed,” said Laine Arnold, Lee’s press secretary.

In previous statements, the governor and the bills’ sponsors have said the legislation targets districts with the highest concentrations of low-performing schools, including the state-run Achievement School District, which oversees charter schools in Memphis and Nashville.

Shelby County is no stranger to asserting and prevailing on such constitutional challenges.

In 2012, a federal judge voided the effects of a new state law that allowed the county’s suburbs to hold referendums on municipal schools and school board elections ahead of a 2013 merger of Memphis and Shelby County schools. Lawyers for the Shelby County Commission and the Memphis City Council had argued the law should be thrown out because it targeted Shelby County without approval by a local legislative body or referendum — a requirement under Article XI, Section 9 of the state constitution.

School boards for both districts oppose the governor’s voucher proposal, as do the Shelby County Commission and Metro Council, the local funding bodies in Memphis and Nashville.

“If the Governor and Legislature are determined to pass a general law that would apply arbitrarily only to us or a limited number of school systems, we will be sure to exhaust all of our legal options,” said Joris Ray, interim superintendent of Shelby County Schools, the state’s largest district.

Education savings accounts “are not what we need for public schools,” she said. “We owe it to this generation of students — and to all of those who follow them – to fight for a system that is fairly funded.”

Although the legislature has approved the proposal, it’s not a slam dunk for the governor’s proposal to become law. Their two bills are widely divergent, with disagreements over funding; which districts would be included; whether to include homeschoolers; how many state tests participants would be required to take annually; and — possibly the stickiest point — language requiring applicants to submit documents verifying their legal status.

Shelby County and Metro Nashville schools already are in a lawsuit with Tennessee over the adequacy of state funding for districts like theirs that serve large percentages of students who come from low-income families, have special needs, or are learning English. That case is expected to go to trial later this year.

And in a separate lawsuit, Nashville school leaders have appealed to Tennessee’s highest court to keep from sharing student information with state-run charter schools — another issue that affects the Memphis district.