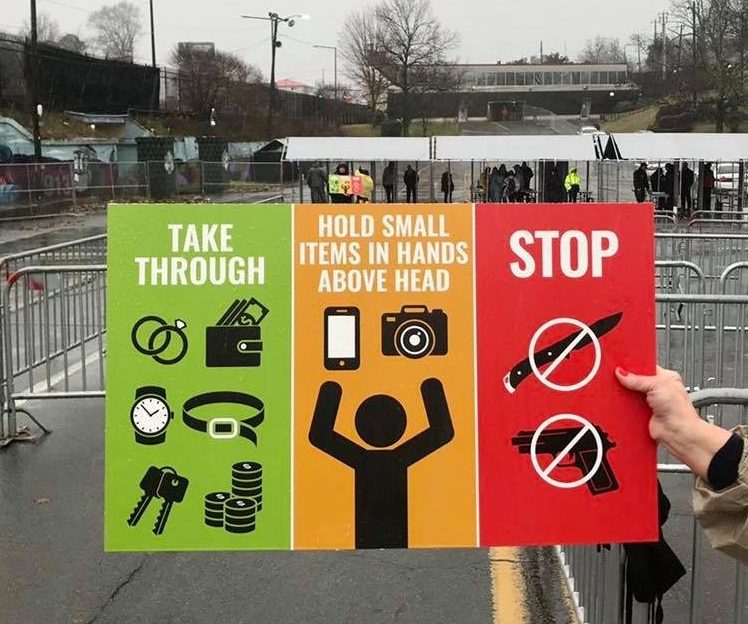 The 2019 Women's March was recently held at Chilhowee Park. Participants entered at an undesignated entrance at the park and walked through the tunnel to the Midway area after going though intense security measures. Plastic screens inhibited the potential interests from passersby on highly traveled Magnolia and MLK Avenues in East Knoxville.

Well, I went to Knoxville’s Women’s March today in miserable wet weather. Saw some dear friends and activists there and heard a couple of speakers before the weather turned too awful to withstand (discovering that one hiking boot was apparently completely porous did not help).

A couple of comments: The Women’s March folks made the decision to hold the event at Chilhowee Park, which is a nice big park in the Northeast section of Knoxville that is surrounded by Knoxville’s African-American community. Their reasoning apparently was that the event should be more inclusive of minority communities–a sentiment with which I completely agree.

I did not, however, notice a larger proportion of minority participants there than last year–and moving it to a place where it was merely the choir preaching to the choir in an enclosed spot far from the center of the city, and surrounded by police, made it … um… less interesting. No one from the neighborhood could have gotten in without crossing Magnolia and walking half a mile through the underpass and into the field. The chain-link fence surrounding the open field was firmly locked, guarded by police.

The Knoxville Police Dept. and the city needs to address why the Women’s March was subject to such heavy police presence. The gates to the park were locked. Attendees were discouraged and went home after walking around the park for entry in cold and rain. The presence of multiple officers was forbidding.

As the Women’s March goes forward, I think the whole thing could use some tweaks.

While a number of speakers focused on the pain women endure, some more than others, I think an equally important focus is the positivity of being women, of being life-givers, affirmers, encouragers, makers, inventors, organizers, and stabilizers of society. Women play a critical part in (and in many respects are the best part of) society. We need to dignify our own efforts.

Society is going through a huge change; everything is hitting the fan right now. Over time, it will resolve, but despite our differences, right now we need to hold to the conviction that above all, we are all human, we all struggle, and we all need to care for each other as best we can. We must reject divisions among us, which ultimately are meaningless and instead, find our common ground. Here endeth the lesson.

Em Turner Chitty is an English language teacher at the University of Tennessee, musician, and community advocate. She can be reached at etchitty@gmail.com.