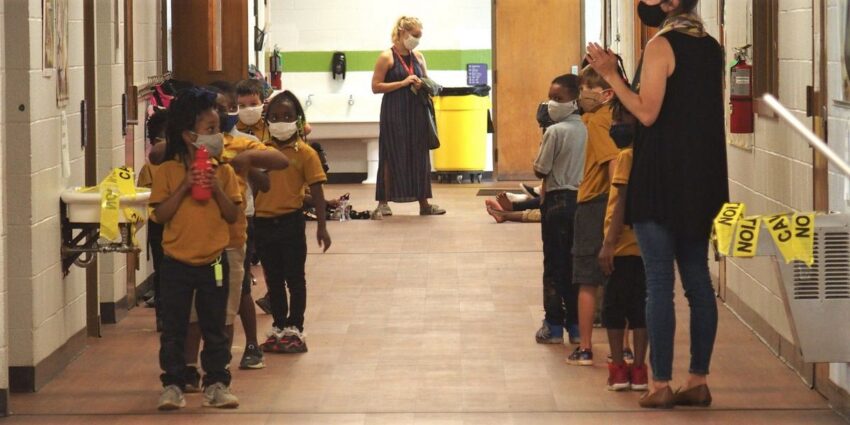 Seven of 79 Tennessee schools flagged for poor academic performance in 2018 dropped off the state’s “priority list” of bottom-performing schools this year when the Tennessee Department of Education unveiled its 2020-21 school accountability lists Tuesday.

Three of the exiting schools are in Memphis, the epicenter of the state’s school improvement work for the last decade.

Sheffield Elementary, part of Shelby County Schools, and two charter schools in the state-run Achievement School District, Libertas and Cornerstone Prep Denver Campus, moved off of the priority list of schools that rank academically in the state’s bottom 5%.

The list is usually met with trepidation from school leaders of struggling schools. But because the legislature voted in January to remove any potentially negative consequences from test scores during a second pandemic year, schools can’t be added — only removed.

Priority status makes schools eligible for the state’s most intense interventions, including possible takeover by the Achievement School District, or ASD, which has mostly assigned struggling schools to charter networks since its launch in 2012.

“These schools have shown how Tennessee districts and schools can overcome a variety of challenges including a global pandemic that impacted the past several months, including the majority of the 2020-21 school year,” Education Commissioner Penny Schwinn said in a statement.
Tennessee’s first pandemic test scores, released last month, showed a proficiency decline of 5 percentage points since 2019, the last time that public school students took standardized tests under the Tennessee Comprehensive Assessment Program, or TCAP.

But while the state’s overall scores went down, some schools did well — or well enough to improve their state proficiency ranking by percentile. Others showed a high level of growth from 2019 to 2021 under the state’s accountability model known as TVAAS, which is short for the Tennessee Value-Added Assessment System.

Libertas School in Memphis was able to leave the priority list because of its performance in both proficiency and growth. The former Brookemeade Elementary School was in the state’s bottom 1% when the ASD took it over in 2015 from Shelby County Schools. Now called Libertas, the Montessori school reached the state’s 25th percentile in proficiency on the most recent tests. Libertas, which serves 485 students from the Memphis Frayser community, also ranked at the top level for student growth.

“What this means is that children in marginalized neighborhoods like Frayser can, in fact, achieve at incredibly high levels and grow extraordinarily to achieve their dreams,” said Bob Nardo, the school’s founder.

Tennessee released its first list of 83 priority schools in 2012, with 69 of those in Memphis. Only 43 Memphis schools made the state’s last priority list in 2018, which added more schools in Nashville, Chattanooga, and Jackson. High schools with a graduation rate of less than 67% also could be placed on priority status.

Pending new state or federal accountability waivers or actions, Tennessee’s next priority list is scheduled to be released in the fall of 2022, following state testing next spring.

Exits from this year’s list include two schools in Chattanooga, one in Nashville, and one in Campbell County.

In response to a 2015 federal education law, Tennessee added two other designations aimed at holding schools accountable. Both lists also had exits this year.

State officials said 108 of 145 schools from 57 districts met the criteria to move off of the state’s list of schools needing targeted support and resources to close achievement gaps among student groups based on race, poverty, disabilities, and language.

Federal law also requires Tennessee to use test data to identify schools needing additional support to improve the performance of similar student groups based on federal criteria. The following 18 schools from 12 districts met criteria to leave that list.

The department is scheduled to publish test results online for all Tennessee schools on the state report card by late September.