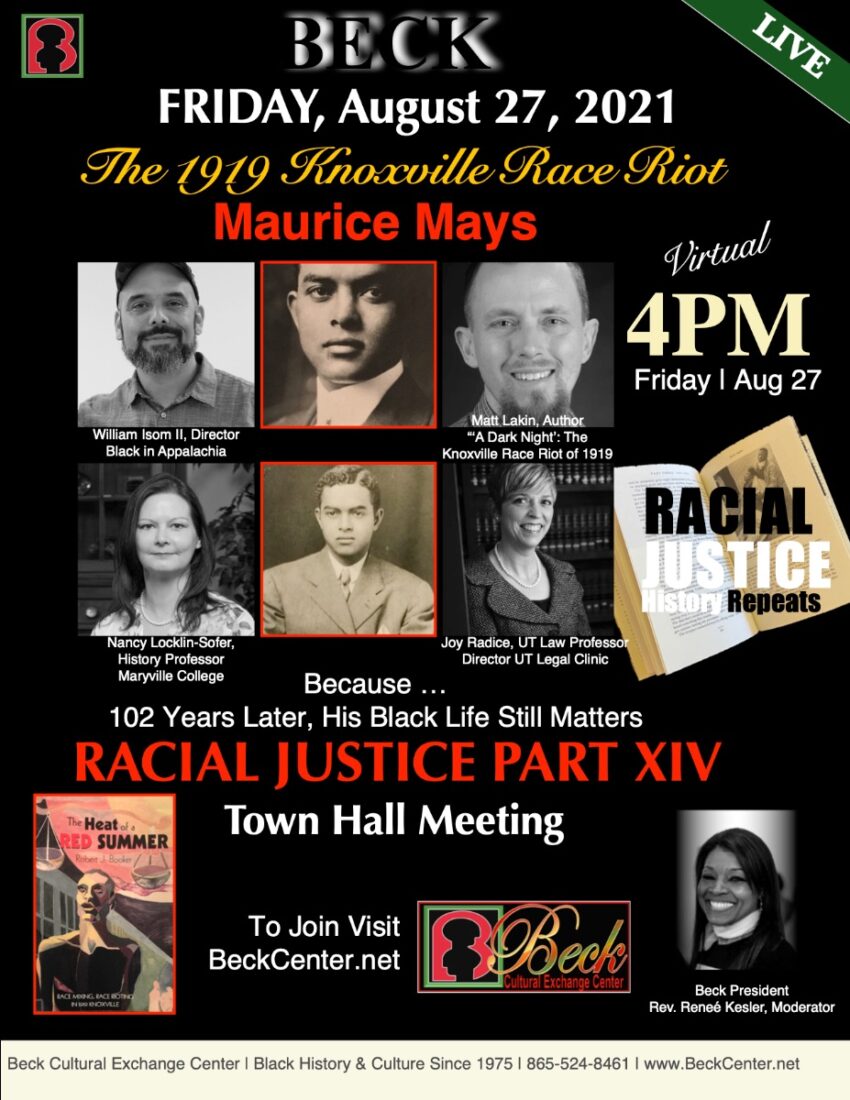 The BECK RACIAL JUSTICE TOWNHALL Series XIV at 4 pm, Friday, August 27, via ZOOM,  will be on the nation’s Red Summer and the 2-days of racial violence that erupted in Knoxville on August 30, 1919.

KNOXVILLE, TN (August 25, 2021) – In Knoxville, the events of Red Summer came under the guise of local law enforcement convincing a white woman, whose sister was murdered while sleeping next to her in the same bed, was done by a biracial black man who was proven to be elsewhere at the time.

The race riot in Knoxville was sparked on August 30, 1919, by a white lynch mob that breeched the Knox county jail in search of Maurice Mays, a biracial man arrested in his home a few hours after the white woman was murdered. In an attempt to uphold justice and thwart a white mob from acting as judge, jury, and executioners, Mays was moved under protective custody to a safe location.

Angry and more agitated from not finding Mays, the white rioters looted the jail and rallied on to the Black community on Vine Ave for vengeance. “The Bottoms” was a thriving nucleus of Black businesses and residents (now the Knoxville Old City).

The Bottoms Black community on Vine (now Central) Avenue spanned from the railroad tracks on Central at Fifth Avenue (near Greyhound Bus Station) to southward with homes along the river extending beneath Blount Mansion and the Gay Street bridge.

This is recorded as the worst known racial episodes in Knoxville’s history that shattered the city’s vision of itself as a racially tolerant Southern town. After the riot, many Black residents left Knoxville, and racial violence continued to flare up sporadically in subsequent years.

The Riots of 1919 were simultaneous assaults  on thriving black communities across the United States. National reports, and in Knoxville, are of streets flowing red with blood, hence The Red Summer.

Knoxville community members, which includes The Beck and former State Rep. Rick Staples, initiated an effort to exonerated Maurice Mays with a petition presented to former Gov. Bill Haslam that was not addressed during his term. The request has been presented to Gov. Bill Lee in hopes of action or at the least the respect of a response.

Join the Beck Center Racial Justice Series in search of racial justice for Knoxville’s Blacks in history who have been denied and ignored.

WILLIAM ISOM II is an East Tennessee native & the director of Black in Appalachia. Isom coordinates the project’s research, community database development, documentary film & photography production, oral history collection and educational events with residents. He also produced a short film, KNOXVILLE’S RED SUMMER: THE RIOT OF 1919, which chronicles the unrest that occurred in Knoxville following the murder of Bertie Lindsey and the attempted lynching of the accused, Maurice Mays

MATT LAKIN has studied the Maurice Mays case and the Knoxville riot for the past two decades. His article, “A Dark Night’: The Knoxville Race Riot of 1919” appeared in the Journal of East Tennessee History in 2000 and won the East Tennessee Historical Society’s McClung Award. He currently works as a science writer for Oak Ridge National Laboratory and was previously a reporter and editor for the Knoxville News Sentinel. He was named Tennessee Print Journalist of the Year by the Associated Press for 2017

NANCY LOCKLIN-SOFER is a Professor of History at Maryville College. Professor Locklin-Sofer has conducted research on a serial killer in east Tennessee in the 1920s. A man referred to as the “Night Marauder” terrorized east Tennessee between 1919 and 1926. While teaching a class on the History of Murder at Maryville College, the murder of Bertie Lindsey, the woman Maurice Mays was accused of murdering, was mentioned in a letter and throughout the trials that received national coverage.

JOY RADICE is the Director of Clinical Programs of the UT Legal Clinic and Associate Professor of the College of Law. Professor Radice’s scholarship focuses on the intersection of criminal law and the administrative state, and the gap in access to civil counsel.  She teaches Advocacy Clinic, Criminal Law, and Expungement Clinic. Prior to joining UT Law, Professor Radice was the 2008 NYU Derrick Bell Fellow and an Acting Assistant Professor at NYU School of Law.  She also serves on the Beck Legal Team Committee for the exoneration of Maurice Mays

Beck began racial justice discussions following the death of Mr. George Perry Floyd, Jr., an African American unarmed man, who was murdered by police in Minneapolis on Memorial Day, Monday, May 25, 2020. These discussions have continued monthly from June of 2020,with a large viewing interests and participation.