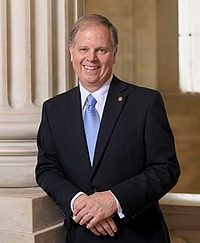 The guest speaker will be Senator Doug Jones (D-Alabama). Sen. Jones, who unseated Trump supported Republican Sen. Roy Moore from a seat Republicans held for decades. Jones’s victory is largely credited to voting campaigns led by black women in Alabama getting out the black vote.

Sen. Jones is the first Democratic Senator to hire a black Chief of Staff.

As a United States Attorney, Jones led the team of prosecutors and investigators in the reopened historic “cold case” of the 1963 bombing of the 16th Street Baptist Church in Birmingham. Jones served as the lead trial attorney in the successful prosecutions of two former Ku Klux Klansmen for the murder of four young girls killed in the bombing.

Tickets $70 per person include a sit-down dinner with water, tea, and coffee. Other beverages will be available at the cash bar.

Tickets purchased after Aug. 1st will be $75, so order today.

Reservations are selling fast!! CLICK HERE to purchase reservations for dinner, or to become a Sponsoring Donor!

Consider being a Sponsoring Donor as well!  Your gifts help sustain our Field Organizer program which is working EVERY day to contact voters and flip KNOX COUNTY BLUE!

Sponsors will be listed on the Program Agenda, the party web page, and shown on a PowerPoint presentation during the program.

In addition to the Friday evening banquet, There will also be a special meet & greet cocktail hour for Diamond & Platinum Sponsor donors before the banquet as well as an event exclusively for Democratic Attorneys & Senator Jones. Details on both of these events are forthcoming.

MISSION: The Knox County Democratic Party exists to elect Democrats to public office in Knox County & the state of Tennessee.

Over the last 8 years, Knox County has shifted 14 points towards Democrats on the Presidential level. In the last 3 years, the Knox County Democratic Party has flipped a State House seat and County Commission seat blue. KCDP is on the move contacting voters year-round, registering new voters, and growing our base.

For more information, to volunteer, or receive the KCDP newsletter, visit the website at www.knoxvilledemocrats.org/