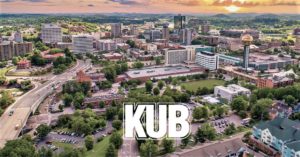 KNOXVILLE, TN (June 15, 2021) – Knoxville Utilities Board leadership took their case for getting into the broadband business to East Knoxville on Monday, fielding questions from community members that kept returning to the theme of affordability for individual ratepayers.

In the second of two public forums in a month, KUB board members and executives came to the Change Center to give an overview of their plan for over $700 million of infrastructure upgrades over ten years, along with creating a new “Fiber Division” for the utility, alongside its electric, water, and gas divisions, then addressed questions and comments from attendees.

President and CEO Gabe Bolas introduced the plan as a long-run cost-saving measure for the utility and its electricity customers and provided the added benefit of providing the fastest upload and download speeds and unlimited data, at or below the rates of leading internet providers in the local market. “KUB is uniquely positioned to provide these services due to infrastructure upgrades that have already been planned or have already been implemented,” said Bolas.

In addition to improving the reliability and efficiency of its electric grid by reducing power outages, the electric fiber network that KUB is installing can be made available to transmit internet data at lightning-fast speeds. When the installation is completed over the entire electrical grid, KUB can also offer reliable, high-speed broadband in areas where it is presently unavailable.

According to Bolas, the upgrades that were in progress before the pandemic would present an opportunity. “The COVID-19 pandemic highlighted the urgency of the need for reliable and affordable internet service. The need in the community exists now and KUB is prepared to help provide a solution as soon as possible.”

The construction of 5,000 miles of fiber optic cable is projected to cost $702 million over ten years. KUB executives say they expect to pay for it with a combination of loans from the Electric Division, increased electric rates over the next three years, and fiber access payments from subscribers to the optional broadband service.

Previously planned electric rate increases would be higher and sooner. If approved, KUB customers would see rate increases of 3% for three consecutive years, beginning next year. According to KUB, the average customer will see a $10.80 increase in their monthly electric bill after all three increases take effect, but subsequent increases would not be expected for at least another seven years.

The electric rate increases were the focus of most interest to the East Knoxville attendees.

DeOssie Dingus raised concerns about the timing of the rate increases as they would relate to the availability of broadband in a given area. “I would hate for low-income folks who are already struggling to be paying more for a service they can’t even get,” said Dingus.

Businessman Brian Brooks was also concerned about the sequence of the phased rollout over seven years. “Are we going to create a larger digital gap than we already have? It depends on where and when they roll out in Knoxville,” he said.

KUB director of grid modernization Jamie Davis acknowledged that it would take seven years at best to build out the fiber network to the entire KUB service area, while the rate increases would take effect immediately. “The factors that would determine where and when we offer broadband would be such as which areas already have a fiber backbone in place, which areas that have the most need for reliable internet, and where could the electric system benefit the most from having fiber,” said Davis.

KUB chairman Jerry Askew responded to affordability concerns with reassurance that “our motivation is a motivation from the heart to meet the unmet need (for broadband access),” he said.

In addition to $20M set aside for low-income home weatherization projects to reduce energy bills, Davis said that KUB is “looking at” how Chattanooga Electric Power Board implemented a program to provide free internet to families whose children qualify for free or reduced-price lunches at schools.

KUB officials stated that the fully rolled out system would create 200 new jobs.

Several attendees agreed that while broadband could benefit their community in the long run with jobs, economic development, and better educational opportunities, the pandemic has exacerbated immediate, day-to-day financial concerns for a growing number of low-income residents of color. “For this broadband to work for us, we will need to make sure this community is at the planning table,” said community advocate Vivian Shipe. “This is the future and we must take it into our own hands.”

The next steps, anticipated this summer, are for the KUB Board to agree to recommend the establishment of a Fiber Division, then a Knoxville City Council vote to establish municipal broadband services.

ABOUT: The Knoxville Utilities Board provides electric, gas, water and wastewater services to more than 400,000 customers in Knoxville and parts of seven surrounding counties. KUB is governed by a seven-member Board, appointed by the city Mayor and confirmed by City Council. For 24-hour Emergency Service, call 865-524-2911. For billing inquiries, service orders, or questions, call 865-524-2911, Monday-Friday 7 a.m.-6 p.m.; TDD – 865-594-7494; or visit, www.kub.org

Rick Held is a self-described “writer, researcher, and instigator of visionary and practical leadership at the intersections of social, economic, environmental, & racial justice & equity.” As a  longtime community organizer throughout Appalachia he is a student of regional history, and a former school teacher of U.S. Government and Economics at Austin-East High School. We welcome his return to journalism on the East Tennessee Enlightener platform. He also contributes to the TNergyBlog.