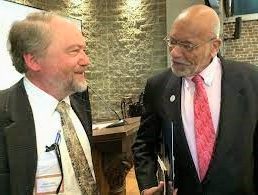 The East Tennessee History Center at 601 S. Gay Street will dedicate its new Microfilm Reading Room at 4-5 pm, Tuesday, June 1. The event is free and open to the public.

The new Booker-Neeley Microfilm Reading Room is named for two of Knoxville’s most prolific historians, Robert ‘Bob’ Booker and Jack Neely. For decades both have contributed to the preservation of the history of Knoxville and Knoxvillians.

The dedication is scheduled for 4 pm Tuesday, June 1st at ETHC.

City Council honored historians and columnists Jack Neely and Robert Booker at a recent council meeting with a resolution recognizing them for their contributions.
Neely was the longtime writer of the “Secret History” column for Metro Pulse and is currently executive director of the Knoxville History Project. Both are Knoxville natives.
(Visit here to read an Enlightener feature of Bob and Dr. Martin Luther King’s commencement speech at Knoxville College).

Governor Bill Lee will be in town to kick off a year-long celebration of the 225th anniversary of Tennessee’s statehood.

The celebration will start at 1:30 pm with a short march from James White Fort to Blount Mansion, which is considered the birthplace of Tennessee.

At the mansion, Lee will be joined by Mayor Indya Kincannon, City Councilman Tommy Smith, Knox County Mayor Glenn Jacobs, Tim Burchett, and County Commission Chairman Larsen Jay, where remarks will be made.

Participants will have an opportunity to use a quill pen to sign their name on parchment atop the 1796 Statehood Desk in Gov. William Blount’s office. Moon Pies and other Tennessee-themed refreshments will be served. The event is free and open to the public.
Lee’s Untold Tennessee initiative is a year-long, statewide series of events and activities in each of  95 counties, celebrating 225 years of Tennessee statehood.
Spread the love