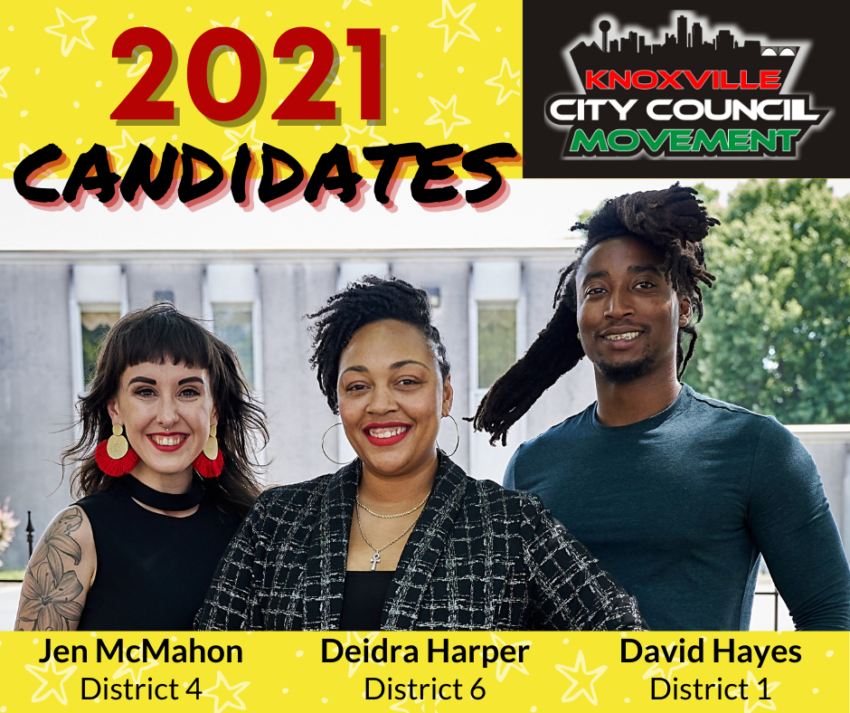 The City Council Movement (CCM) builds on its 2017 and 2019 victories with competitive candidates in Knoxville’s 2021 City Council contests.

CCM will be hosting a kickoff event on Saturday, June 12th from 5-8pm at The Gathering Place, 3906 Martin Luther King Jr Avenue, in Burlington. This event is open to the community to come learn about CCM, volunteer opportunities, and to meet and greet the endorsed candidates. Entertainment, food, and drinks will also be provided for attendees; this is a family-friendly event. Mask wearing and social distancing are encouraged for all attendees

The candidates were selected through an open and competitive application process and selected for their proven commitment to advocate for our most marginalized communities and their alignment with CCM’s People’s Platform.

Hayes, Harper, and McMahon join a legacy of candidates and campaigns that are part of a movement in Knoxville to build local governance that works for all Knoxvillians.

This is the third round of city council elections with candidates endorsed by CCM. In the previous two election cycles, CCM candidate Amelia Parker was elected and to an At-Large City Council Seat. The Movement anticipates wins in this election cycle as well.

The City Council Movement evolved from Rescue and Restoration, a political caucus formed in 2014 to address health, political, education and economic issues that affect predominantly African-American communities. The mission is to strengthen the political power of the people, hold elected officials accountable, organize, educate, and encourage citizen participation to secure a democracy that is equitable to all citizens.

David Hayes is an activist, organizer, and working-class Knoxvillian who is devoted to uplifting and empowering individuals, families, workers, and communities in Knoxville and throughout Appalachia. David has lived in South Knoxville and the UT area since moving to Knoxville at 18, and is deeply committed to seeing it thrive and be an affordable place for all. David is returning for a second city council run as a CCM endorsed candidate after earning 45% percent of the vote in a close 2019 race for At-Large Seat B. To connect with his campaign, email votedavidhayes@gmail.com

Jen McMahon is an Ohio native, but a Knoxvillian at heart. She has called Knoxville home for over 6 years, and has fallen in love with all East Tennessee has to offer. Jen became the CEO and Co-Founder of Century Harvest Farms Foundation in late 2017. Jen is a member of the LGBTQIA+ community and is a member of St. John’s Lutheran Church. Jen is a board member of the Loudon County Health Improvement Council, serves on the Governing Council for the Tennessee Valley Continuum of Care and is a graduate of the University of Tennessee’s Consortium for Social Effective Enterprise Program. To connect with her campaign, email mcmahonforcitycouncil@gmail.com

Deidra Harper, a Knoxville native, is an entrepreneur, co-owning Elite Facility Maintenance, and a freelancer who focuses on Graphic Design. She’s also the public relations director and Co-Founder of TENSE Summit (Teaching to Eliminate Negative Stereotypes through Education). Deidra is also Co-Founder of The Women LLC and The Women Foundation, which focuses on creating avenues to financing small Black business expansions and start-ups through crowdsourcing, community funding, and real estate investment. She is a proud member of Alpha Kappa Alpha Sorority, Inc. She serves on the boards of Knoxville Botanical Garden and Arboretum as well as the Greater Knox County Black Chamber of Commerce. As a Knox.Biz 40 under 40, Deidra is embracing her title of businesswoman and active community leader, focusing on bringing effective change and leadership to District 6 and the entire City of Knoxville. To connect with her campaign, email info@deidrafordistrict6.com