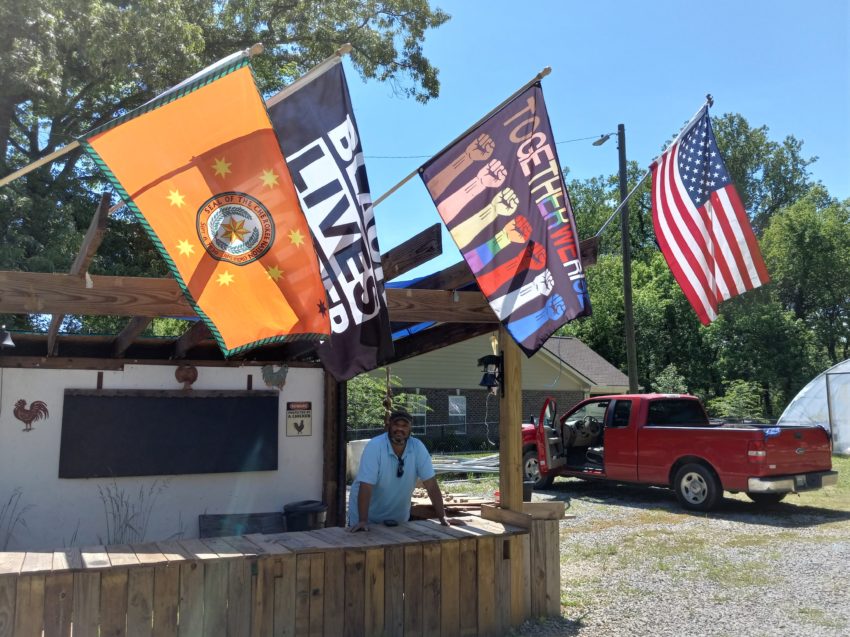 The farmstand at the entrance to Battlefield Farm teaching garden. (Photo P.Williams, May 2021)

Pastor Chris Battle resigned from a ‘brick and mortar church’ to minister from new venues, Battlefield Farm and Gardens; and from the Underground Collective, church reimagined.

KNOXVILLE, TN (April 28, 2021) – Pastor Chris Battle has ministered from many platforms. But he never envisioned it to include being knee-deep in dirt and horse manure with chickens.

Battle prepared himself for his call to ministry. He is a native of Ohio, a Morehouse HBCU graduate and has earned additional ministerial-focused degrees.

In 2008, Battle was sent to Tennessee to pastor a church in East Knoxville. He, his wife Toma and their children were a welcomed addition to the city. Over the years, Battle noticed the inequities, disparities and the ‘food deserts’ that encompass predominately black, and other working-class communities and endeavored to do something about it.

“All of this gardening and farming was new to me,” said Battle. He confesses that he didn’t know what okra was until he came to Knoxville.

But that didn’t stop him from starting a community garden on ground behind the church. It was a humbling experience for Battle. “I met neighbors who lived next door to the church, and community members I had never met,” said Battle. He realized the disconnect of the traditional church from the people.

One thing led to another and from there, the Eastside Sunday Farmer’s Market was established with support from Nourish Knoxville, Women in Agriculture, Five-Points Up, and SEEED. It is the city’s only Sunday market from 1-4 pm, at Dr. Walter Hardy Park, 2020 Martin Luther King Jr. Ave. in East Knoxville across from Tabernacle Baptist Church.

The following year, Battle took his gardening to another level. He was offered an established farm that was Abbey Field Farm at the old Standard Knitting Mills site. Battlefield Farm (BFF) was born. But after a few seasons, the property was sold causing Battle to seek new ground for his fledgling farm.

In short order, Battle was again offered land to rehome the farm. It was a 2-acre plot, off the beaten path, in East Knoxville. “It’s cheaper than the other location and has more acreage. I was paying $1 a year there, and this one is free,” Battle chuckled.

Battle purchased an additional 1-acre space at 3624 Boyd’s Bridge Pike to facilitate the secluded 2-acre primary farm. He has made this more visible and accessible plot into a hands-on Teaching Garden that has quickly evolved into a favored destination for volunteers, students, and groups of all ages and interests. Look for the farm stand, where available harvests will be offered.

Right now, BattleField Farm and Garden is in need of someone capable of tilling the primary 2-acre farm for planting. If you can help, please email battlefield1@gmail.com. The farm has sustained and flourished from volunteers and the generosity of many. 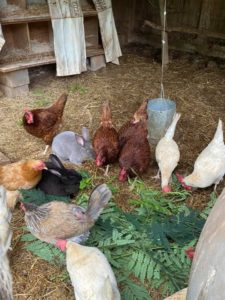 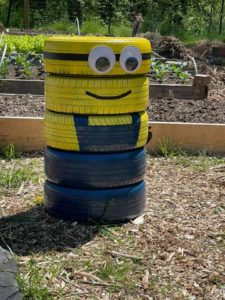 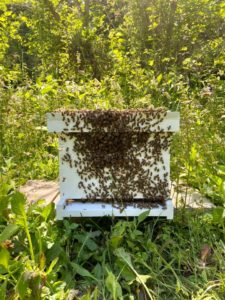 CAPTION: Can you find the rabbits among the chickens? Battle said they found their way into the coup and stayed. The minion farmer in overalls was there one morning and has become a main-stay. The ‘carti’ bees will soon have honey at the farm. (Photos submitted, 2021)

Volunteer and BFF board member Louisa ‘Lou’ Purviance can be found at the farm most every weekday morning – for the joy of being there. She and her husband moved to Knoxville about 2-years ago from California. In her search for volunteer opportunities, she found Battlefield Farm. It was a perfect match for her experience producing flowering plants.

There are no strangers at the farm, people come with differences in race, culture, background, political, gender bias,  identity, and… But those differences dissipate in the dirt according to Battle. He said he enjoys the pleasant conversations from curious onlookers who stop by the Teaching Garden. “I have met people here, I would have never met in church or a religious setting.”

Battlefield Farm and Garden Dedication of the Land Service

A “Dedication of the Land” ceremony was on Wednesday, April 28th. Due to limited parking, the service was shared and can be viewed here on Facebook Live.

Battle is grounding the farm on 3 common human principles that bind and not divide us. They are:

Agape (God’s unconditional love); Shalom (Jewish for peace, oneness; harmony); Umbutu (African for I am because you are).

The special guest was Ron Morton, of Cherokee/Chickasaw Indian descent and a friend of Battle’s. Morton performed a traditional Indian ceremony to “ask the spirits to bless the land.” Morton’s performance was accompanied by Austin-East African drum teacher Obayana Ajanaku.

“I came to realize that I am a stolen man on stolen land. This land belonged to someone else,” said Battle. “I felt it important to respect and recognize the Cherokee nation, the indigenous stewards of this stolen land.”

Participants also included Claire Chenette Trio with a rendition of “What a Wonderful World;” Bethel AME Church Pastor Lee Russell Brown, prayer; and the East Side Sunday Market manager and board member April Law with a poetic reading about gratitude. Other board member participants were Kanika White, Jonathan Haskell, Rev. Calvin Skinner, and of course Lou.

Battle is becoming recognized in the community of crop production farmers. Occasionally, he is given a truckload of a vegetable, which he gives away from the teaching farm. A jar for monetary donations is available some of the time, as Battle often forgets to put it out. The few donations received are appreciated, but not required.

Recently, over 1,500 pounds of sweet potatoes were available for the taking. Previous offerings have included green beans and speckled lima/Christmas peas. To learn when a free veggie is available, join/visit Facebook pages Battlefield Farm and Garden; or Chris Battle.

While BattleField Farm and Gardens have established roots on new ground, Battle has continued to sow seeds of faith through “The Underground Collective: Church. Reimagined.” It is an informal, participatory discussion of scripture with a diverse group of attendees. For more information, visit undergroundknoxville.com; on Facebook; or email; theundergroundknox@gmail.com.