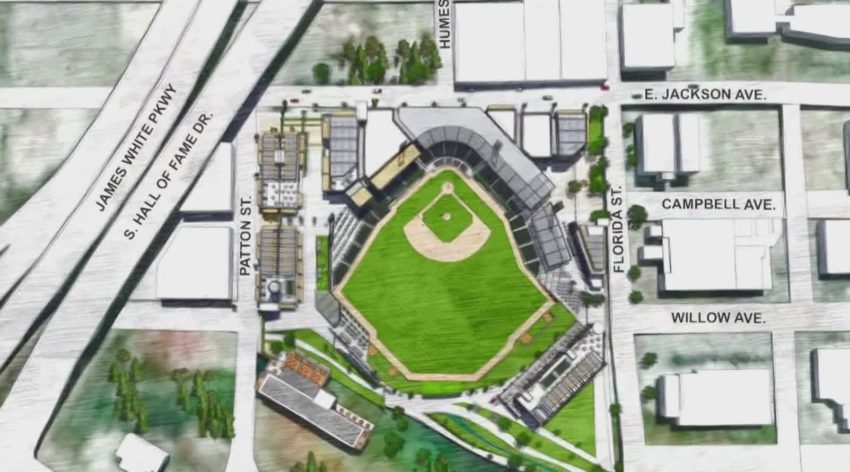 Smokies Stadium planned outlay in the heart of the Old City.

I respectfully encourage anyone who is an opponent of prioritizing taxpayer money for a baseball stadium to benefit private entities – including the Smokies and Gem Development – with massive profits, that now is the time to take action.

In a Senate Finance, Ways and Means Committee meeting on Tuesday, April 6, Senate Finance Chairman Bo Watson and TN Commissioner of Revenue David Gerregano pointed out that the new development and the proposed taxing district around the proposed taxpayer-funded baseball stadium does NOT create new sales tax revenue. It simply shifts spending in a community. Sales taxes do not work like property taxes as pointed out by Commissioner Gerregano. They have confirmed that a taxpayer-funded stadium WILL take money from the City of Knoxville, Knox County, and Knox County Schools to fund a privately owned baseball stadium.

You can view the meeting in its entirety at the link below. The query from the Senate Finance Committee starts at 28:45.  http://tnga.granicus.com/MediaPlayer.php?view_id=610&clip_id=24535.
To watch the testimony of TN Commissioner of Revenue David Gerregano start the video at 44:19 http://tnga.granicus.com/MediaPlayer.php?view_id=610&clip_id=24535
Compass Knox (a respected local online publication) reported on April 7, 2021: “A bill creating a sales-tax district that would surround the proposed baseball stadium in downtown Knoxville ran up against some tough questions Tuesday in the state Senate’s Finance, Ways and Means Committee. Knox County Mayor Glenn Jacobs went to Nashville to testify in favor of the bill (inset screenshot), along with bond attorney Mark Mamantov. Also on hand via video was Stephanie Welch, the City of Knoxville’s chief economic and community development officer.

“It’s not just a baseball stadium,” Jacobs told the committee. “It’s an enormous economic development project, one of the largest in the history of Knox County: $200 million, 3,000 jobs for our community.”The bill would allow new state and local sales taxes generated by private development within a quarter-mile radius of the stadium to be captured to pay off debt on the estimated $65 million facility. Proponents of the project say that could cover 20 to 30 percent of the total annual debt service.”

Sen. Bo Watson, R-Hixson, the committee’s powerful chairman, peppered the bill’s sponsor’s Knox County Republican Mayor Jacobs and Sen. Becky Massey, R-Knoxville, with skeptical questions. He suggested that rather than generating new business and spending, the development will just “cannibalize” it from other parts of town.

“And so actually, you’re not really getting any new dollars, you’re simply transferring dollars from one area of your city to another area of your city,” Watson said. “If the state is collecting sales tax in this other area of the city, and now those people are now just transferring to another part of the city, now the state is actually losing tax dollars.”

The Knox contingent got little help from state Commissioner of Revenue David Gerregano, who told Watson he shared his concerns.

“I think one way to look at this, is this really going to change folks’ behavior such that we have enough additional people who wouldn’t have visited Tennessee anyway come in and spend more money, or we have enough residents spending over and above what they would have spent otherwise over time because of this development,” Gerregano said. “And I would suggest that’s just not a realistic expectation.”

In the face of facts and representatives looking out for the interest of our state, the proponents of the stadium bill chose to put off a vote on the bill until next week.

Massey promised to be back with more details of the proposed private development tax bill. An appeasing amendment to the bill is likely. Maybe the proposal will find a warmer reception next time around, but the air at Tuesday’s hearing was decidedly chilly.
Erik Wiatr can be reached by email at; erikwiatr@gmail.com.
Spread the love