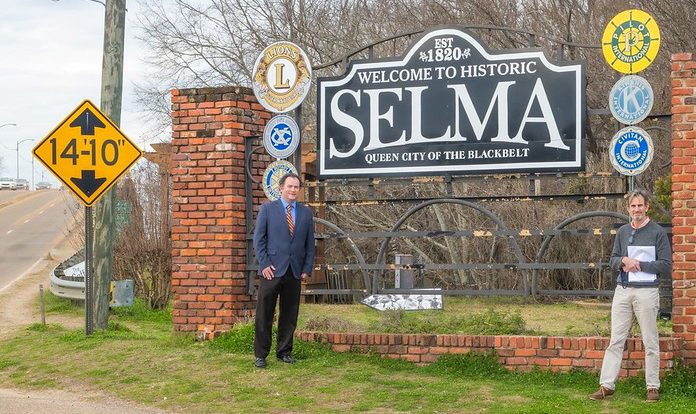 Auburn University’s Passion Project chronicles the significance of ‘Selma’s Bloody Sunday’ in an effort to; name the brave nameless participants, share the experience of marchers on their way to the bridge and the aftermath that immediately followed the widely publicized police brutality inflicted on the peaceful marchers in their attempt to cross the bridge to the county seat of Montgomery, Alabama to vote. 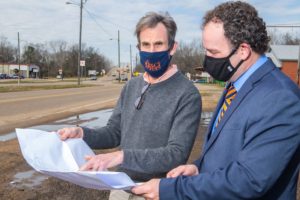 are using modern technologies to name some of the nameless brave marchers and to chronicle the prelude and aftermath of activities of marchers and participants who contributed to the march across the Edmund Pettis Bridge for the Passion Project. (Photo Auburn University, 2021)
By Neal Reid, Auburn University
Communications and Marketing
(February 23, 2021) – Approaching Selma, Alabama, from the south on Highway 80, the iconic Edmund Pettus Bridge looms large on the horizon as travelers begin the incline to cross the Alabama River.

Most drivers may not notice the 300-yard area before the bridge—now a dilapidated row of mostly boarded-up businesses long since shuttered—or even realize they are traveling through a historic site until they happen to catch a glimpse of the modest memorial park located to the bridge’s southeast as they head downtown.

Two Auburn University professors—Richard Burt and Keith Hébert—are committed to changing that. The four-lane roadway heading towards the bridge was the site of one of the most seminal moments of the history of civil rights.

The Edmund Pettus Bridge in Selma, Alabama is where on March 7, 1965, John Lewis, Hosea Williams and a group of approximately 600 marchers were confronted by Alabama State Troopers armed with tear gas and metal batons as they began a march for equality toward Montgomery. The nation watched in horror that night on the ABC television station as marchers were pummeled by law enforcement in what became known as “Bloody Sunday.” The event would serve as a catalyst for Americans across the country to rally behind the civil rights movement like never before.

A much larger group of marchers led by Rev. Martin Luther King Jr. and John Lewis, eventually completed the roughly 50-mile journey to the state’s capital of Montgomery on March 24, 1965. But Bloody Sunday will remain a pivotal day in the annals of U.S. history. The event contributed greatly to the Voting Rights Act becoming law on Aug. 6 of that year and forever entrenched Selma in the history books.

For Burt—the McWhorter Endowed Chair and the head of the McWhorter School of Building Science in the College of Architecture, Design, and Construction—that stretch of highway in Selma has sparked a passion project fueled by the desire to know more about what took place on that historic day.

“We consider this one of the most important historic sites in the United States,” Burt said. “When most people think about Bloody Sunday, they think about the bridge, but the actual conflict didn’t occur on the bridge. I don’t know if visitors who drive by there really get the historic significance of this.

“It is not just important to Alabama, it’s important to the whole U.S., and everyone in the world knows about Selma, Alabama. I think this site deserves some attention to tell its story and have its history chronicled in more detail.”

In 2016, Burt and his research team—which included Danielle Willkens, now an assistant professor at the Georgia Institute of Technology—began using historical photos and video footage, photogrammetry software, laser scanners, drones and design concepts and technology to survey and map the area where the confrontation occurred. Burt’s team has been able to identify and chart the location of everything from local businesses, vehicles parked on the road and Alabama State Troopers, to the civil rights marchers, spectators and media, including the ABC News van that captured the events as they unfolded.

Burt has been able to largely recreate the scene from 1965 in the form of schematics and computerized plans in a pursuit to preserve the setting of Bloody Sunday.

“I think the power of this project is that it started off using science on the survey and architecture side and is moving to the historical aspect going forward,” Burt said. “The fact that it’s interdisciplinary and everyone is working together speaks a lot to the importance of this area and the project in general.”

Burt’s project piqued the interest of Hébert from the Department of History in the College of Liberal Arts in 2017, and the two began a partnership that gave the project added depth. Hébert echoes Burt’s sentiments regarding the significance of Bloody Sunday and the area they are researching.

“Selma is a very significant historic site, and when people all over the world hear the name Selma, Alabama, they think of human rights and voting rights,” said Hébert, an associate professor of history and public history program officer at Auburn. “The march from Selma to Montgomery in many ways is seen as one of the seminal turning points of the civil rights movement. Bloody Sunday helped generate more public support for the things the marchers were marching for, and it was a catalyst for change in getting the national opinion behind certain parts of the civil rights movement.

“People still come to Selma to look at the bridge and the monument and reflect on how far we’ve come and how far we still have to go, and the bridge is an excellent metaphor for that. This area we are researching was Ground Zero for the civil rights movement.”

The newest phase of research

Going forward, Burt, Hébert and their colleagues hope to use all the tools at their disposal to identify even more aspects of the scene in Selma on that day—most importantly the identities of the marchers. Some of the more prominent figures—including Lewis and Williams—have been identified through the years, but hundreds of other brave participants remain unrecognized.

Burt and Hébert hope to raise funds to advance the venture through 2021 and beyond and identify the hundreds of marchers. They hope to do so through an alliance with Auburn’s Honors College, whose students will be tasked to identify the individuals who were part of Bloody Sunday.

Burt and his team have worked extensively with the Alabama Department of Archives and History, as well as with other historians, media and researchers to learn what they have thus far. Plans are in the works for a grant to fund an archeological endeavor and a K-12 education workshop. Donations to the project could be a springboard to new discoveries for the talented team, and, as a result, give credence to the group’s desire to give the historic site its just due.

“Fortunately, several years ago, the National Park Service created a historic trail that links Selma to Montgomery along Highway 80, but a lot of buildings that were there in 1965 are in need of preservation,” Hébert said. “They need to be identified, cataloged and studied so we know exactly what happened, almost minute-by-minute, during the struggle in Selma.”

Importance of preserving this history

From a big-picture standpoint, chronicling and researching history is a noble pursuit in the eyes and minds of academics, especially Burt and Hébert.

“It’s not an understatement to say that history is power,” Hébert said. “How we remember the past has meaning today because, in our society, we privilege some history and undermine other histories. For a long time, the history of Selma and the Edmund Pettus Bridge was undermined, to a certain degree. It was not necessarily forgotten but was kind of obscured.

“So, that’s what we’re here to do, to balance more the historical record and memory of how we look at the past. That brings us a little bit closer to a more just and equitable society.”

The project’s interdisciplinary aspect is especially appealing to the professors.

“Each of us brings our own unique perspective of how to approach a site like this,” Hébert said. “This is what Auburn, as a land-grant university, is supposed to be doing—coming out into the community and being engaged in civic-minded scholarship and applying our talents to bring resources to a community like Selma while enriching our own lives.”

In the end, Burt and his colleagues have one simple pursuit their considerable efforts are designed to achieve.

“We want to give names to the nameless,” Burt said.