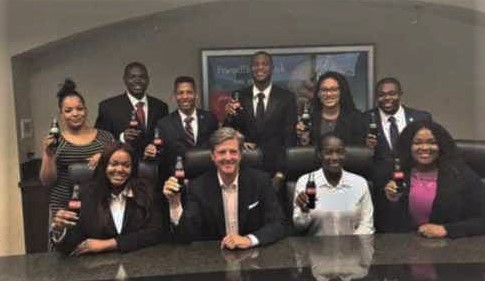 Pay It Forward campaign offers 32 HBCU students from 16 colleges from across 6 states will receive a week of training and a $1,000 school stipend.

CHATTANOOGA, Tenn.– Coca-Cola Bottling Company UNITED is seeking applicants for the 2021 edition of the company-wide “Pay It Forward” program, which aims to provide African-American youth with opportunities to further their success. Normally, this program is a week-long, in-person experience; however, this year due to COVID 19, students will participate virtually.

In its sixth year, the opportunity is open to those age 18 years or older at the time of entry, and they must be enrolled as a full-time undergraduate college student at a participating Historically Black College and University (HBCU).

In 2015, Birmingham and Montgomery Coca-Cola UNITED implemented the Pay It Forward program to provide African American youth opportunities to succeed. Three years later, Coca-Cola UNITED expanded the program to include historically black colleges and universities in Alabama and throughout UNITED’s six-state footprint, which includes; nearly all of Louisiana, much of Georgia and parts of South Carolina, Florida, Mississippi, and Tennessee.

Those selected for this prestigious program will be given the opportunity to participate in a week-long internship at a Coca-Cola UNITED facility. The program offers students firsthand experience in a range of roles available at Coca-Cola, including operations management, packaging, pricing, event planning, and philanthropy.

These selected students will engage with Coca-Cola Company teams possibly in person and virtually to learn more about the organization and how to conduct business most effectively during a fun and informative development session to be held in late summer 2021.

During this internship, students will gain experience in a wide range of roles at Coca-Cola including sales, production, marketing, pricing, event planning, packaging, philanthropy, and community relations. One of the main goals of the program is to teach the interns, how to read statements, how to network with others in their industry, and other important skills that will help ready them for the job market. Over 100 students from Coca-Cola’s partner HBCU Colleges and Universities have participated in the Pay it Forward internship to date.

“More than ever Coca-Cola Bottling Company UNITED is looking forward to providing these outstanding group of ‘Pay It Forward’ interns with unique opportunities to learn tangible business skills,” said John Sherman, President and CEO Coca-Cola Bottling Co. UNITED. “Our intent through this program is to engage with these young adults, empowering them to set goals as they embark on their bright futures, hopefully at Coca-Cola.”

Coca-Cola Bottling Company United, Inc., founded in 1902 and headquartered in Birmingham, Alabama, is the second largest privately held Coca-Cola bottler in North America and the third largest bottler of Coca-Cola products in the U.S.  Now with its fifth generation of family working in the business, Coca-Cola UNITED has approximately 10,000 associates located in more than 60 facilities across six southeastern states (Alabama, Florida, Georgia, Louisiana, Mississippi, and Tennessee).  Historically significant franchises within our Coca-Cola UNITED family include Chattanooga, the world’s first Coca-Cola bottler; Atlanta, home of the worldwide Coca-Cola System; and Columbus, Georgia, development site of the original Coca-Cola formula.

For 119 years, Coca-Cola UNITED has remained true to its foundational core values of Quality, Excellence, Integrity and Respect.  Local relationships, personalized customer service, and strong community engagement have been the foundation of our business for more than a century.  Each year, millions of dollars are invested in our local communities, supporting education, community development, sustainability and nonprofit organizations that empower and impact those in need.