The view from The Hill at Knoxville College, southeast towards downtown Knoxville. Far left is the steps and chapel that is at the entrance of the KC campus in Mechanicsville. 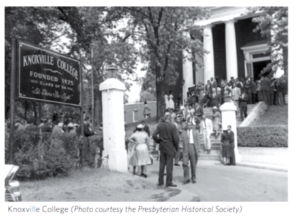 KNOXVILLE, TN – ‘The Hill’ is located at the heart of Knoxville College, a historically black college/university (HBCU) in Knoxville, TN. It is thought to be the highest point above sea-level within the city limits of Knoxville. It also has the distinction of being one of the most history-filled parcels of acreage in the United States.

For over a century, Knoxville College students referred to the front of the campus as ‘The Hill,’ which rises 991.3 feet above-sea-level. (Ft. Sanders is 925′, Summitt Hill is 958′, and the hill on the University of Tennessee campus is 961.3′ above-sea-level according to Knoxville Geographic Information System (KGIS) data.) This may make “The Hill at Knoville College” the highest point within the city limits, and the highest elevation within the three remaining largest cities in Tennessee; Nashville, Memphis, and Chattanooga.

In 1875, many freed slaves had advanced to college-level education. The school moved from its east Knoxville location near Chilhowee Park to the hill, its present-day site in northwest Knoxville. The Freedmen’s Association of the Presbyterian Church purchased acreage that included the hill to establish a college in East Tennessee for former slaves freed after the Civil War.

The Deadly and Bloody Civil War

The historical irony is, the deadliest and bloodiest war in American history – the Civil War, 1861 to 1865 – was fought because 11 southern states demanded white supremacist slavery. The leadership of those states rebelled in an attempt to secede from the United States of America. Presidential candidate Abraham Lincoln did not get a single electoral vote from those states (sound familiar?).

By Executive Order, President Abraham Lincoln signed  – The Emancipation Proclamation – which legally emancipated all slaves in America effective January 1, 1863. Lincoln’s act of overturning American slavery precipitated his bloody assassination in 1865 by John Wilkes Booth, a staunch proponent of slavery who believed his actions would ‘protect the Constitution.’

Twelve years after Confederate soldiers were defeated in the Battle of Fort Sanders at Knoxville, emancipated slaves were legally allowed to attend college in east Tennessee after the 1865 Congressional passage of the 13th Amendment that abolished slavery. President Lincoln was assassinated four months later.

In December 1875, Tennessee Governor William Brownlow attended the celebratory grand opening of the college for freedmen in Knoxville, Tennessee. For the next 25 years, many Whites also attended Knoxville College until state-imposed Jim Crow laws mandating segregation were enacted in 1901.

The historical IRONY continues: As mostly Confederate soldiers died in the 1863 Battle of Fort Sanders at Knoxville, Union Army General Ambrose Burnside called a cease-fire and allowed Confederate General James Longstreet’s troops to drag their fallen dead to a site near the hill for burial.

The Hill had been used logistically as a military outpost to protect the city. On November 29, 1863, it also became a Confederate burial ground with the defeat of Longstreet’s troops. The Union victory liberated the people of Knoxville – from under a Confederate siege — to return to Union army support in the prosecution of slavery.

Exactly 100 years after Abraham Lincoln was elected president, a descendant of slaves, a Baptist preacher and civil rights leader from Georgia – Martin Luther King, Jr. – delivered the 1960 Knoxville College commencement address outdoors on The Hill to an overflow crowd.

Inspired, electrified, and propelled into action against legal segregation, the crowd witnessed the college students — led by their student government president Robert Booker — march immediately downtown to the segregated lunch counters and theaters to attempt purchases.

Knoxville city government and business leaders ultimately relented under the continuous pressure of the student-led sit-ins. Local clergy eventually joined the students in the sit-ins and protests.

By 1963, all Jim Crow laws were falling, which opened public accommodations to all people. The Knoxville College student-led Sit-in Movement to abolish legal segregation in Knoxville began on ‘the hill. The Battle of Fort Sanders brought an end to legal slavery from ‘the hill’ which became Knoxville College.

Tennessee historian Robert Booker – the great repository of Knoxville College history and Knoxville’s Black history – has written about the discovery of Confederate soldiers’ bones, in 1925, when the college campus grounds were being graded for its first homecoming football game. Other Confederate soldiers, several freed slaves (previously owned by the President of the United States), several educators, doctors, and civic leaders are recorded as buried in the campus cemetery, the Freedmen’s Memorial Historic Cemetery near the hill.

Listed on the National Registry of Historic Places

The National Registry (NRHP) lists ‘the Hill’ as an American ‘Historic District’ which places it in a position to receive federal restoration funding for each campus building sitting upon it. Students should be teeming ‘the Hill’ again soon as Knoxville College redevelops into a four-year online and residential college.

Today, the hill is slowly returning to life after the college closed its doors in 2015. One of the historic buildings has recently been renovated and reopened for college studies, and a second is under renovation. Almost half of the buildings on campus are designated ‘historic sites’ in America, as they have been listed – since 1980 — on the NRHP (National Registry of Historic Places).

The redevelopment is in large measure because the historicity of ‘The Hill’ makes Knoxville College one of the most history-rich sites in all of America. ‘The Hill’ is forever inextricably tied to America’s inhumane bloody Civil War and America’s redemptive Civil Rights Movement.

ABOUT: Knoxville College is a historically black liberal arts college in Knoxville, Tennessee, which was founded in 1875 by the United Presbyterian Church of North America. The campus has been vacant since 2015 and is in the process of rebuilding and reopening.