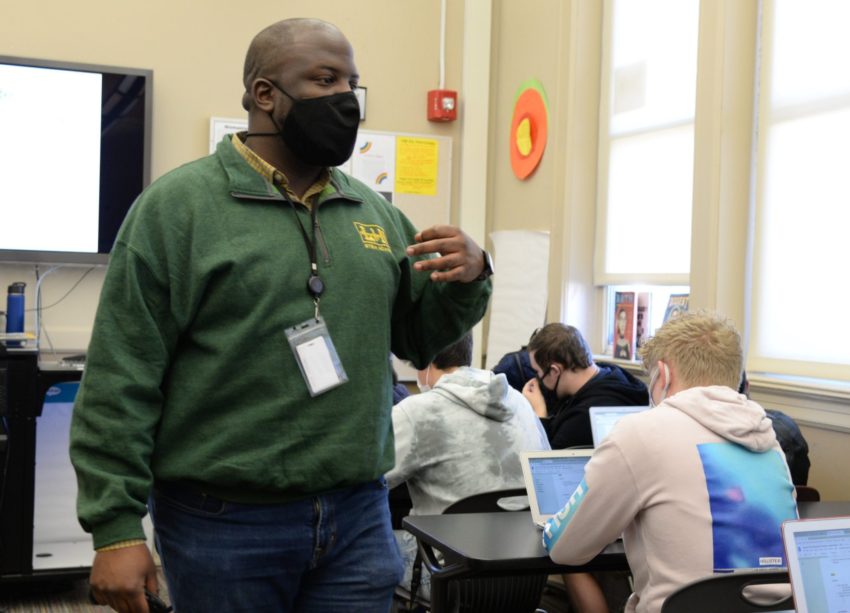 Derek Griffin is a Social Studies teacher at L&N STEM Academy and a member of the KCS Minority Advisory Council. “If students are taught history together, they can recognize that we are one community and not a separate society.”

KNOXVILLE, TN (February 3, 2021) – As schools across Knox County celebrate Black History Month, students will learn about pioneering African-American scientists, civil rights leaders and artists. Educators are also working to ensure that Black history and achievements are woven into the district’s curriculum throughout the year.

Shannon Jackson, the district’s executive director of teaching and learning, said there is strong evidence highlighting the importance of “windows and mirrors” for helping students engage with the material they’re learning.

Jackson said an effective curriculum has mirrors that allow students to see themselves reflected in topics like literature, history, and science, but also provides windows into cultures that may be less familiar.

“When students feel included in the curriculum, they’re more likely to achieve,” Jackson said. “Even more than that, our country’s story is one of many cultures coming together with lots of different, rich contributions. And it’s important for students to both see the contributions of the people they identify with but also to recognize the contributions of other cultures.”

In recent years, several KCS schools have implemented an ELA curriculum called “Wit and Wisdom”, which aims to provide students with books that inspire a passion for reading and writing.

Derek Griffin, a Social Studies teacher at L&N STEM Academy, said that during a history class last semester his students learned about the “Red Summer” of 1919 when a wave of violence targeted Black citizens in cities across the country.

Understanding Black history can also help students engage with present-day challenges and struggles. Griffin said that knowing this information led his students to draw comparisons with modern-day events, and “see things that have changed (and) how this is different, but potentially some of the problems that we’re still dealing with.”

Griffin, who serves on the KCS Minority Advisory Council, teaches a course on African-American History for the QuEST virtual learning program, as well as U.S. History courses at L&N.

In his U.S. History courses, Griffin said he’s made an effort to broaden the representation of the people who are studied. If his class is talking about 19th Century inventors, for example, he has worked to include discussions of African-Americans like George Washington Carver and Madame C.J. Walker alongside information about Alexander Graham Bell and Nikola Tesla.

At the same time, he was quick to point out that the goal is not to create a separate history for different groups of people, especially at a time when there is already cultural division.

“I think if students are taught the history together, they can recognize that we are one community and not a separate society,” he said.

Sarah Lyle, an 8th-grade ELA teacher at Vine Middle Magnet School, said the curriculum elevates the voices of Black novelists, poets and speakers, in a way that encourages all of her students to share their own personal stories.

In fact, one of the writers highlighted early in the middle-school curriculum is Nikki Giovanni, the Black poet and writer who was born in Knoxville and attended Austin High School. Lyle said students read Giovanni poems including “A Poem for My Librarian, Mrs. Long”, which references Knoxville landmarks like Gay Street and the JFG Coffee sign.

Her work, Lyle said, is “super-relevant” to students from Knoxville, but “no matter who you are or where you live Nikki Giovanni is phenomenal … That’s really impactful for our students.”

In some cases, the “windows and mirrors” approach results in classes devoted specifically to exploring the American story through the lens of a particular culture.

Last semester, Brandon O’Neill taught an elective course on African-American history at Fulton High School, and this semester he is teaching a course on Latinx History.

O’Neill said that compared to a traditional history course, the elective course provides more time to look at leaders and stories that have not been as widely shared. Instead of stopping with Martin Luther King, Jr., and Malcolm X when teaching about the Civil Rights Movement, for example, students can read about John Lewis, Diane Nash, and Stokely Carmichael.

The idea, he said, is to help students “see the world and to see history not just through their own eyes but through others’ eyes. You want to activate … the empathy that people have.”

Paris Banks, a junior at Fulton, took the African-American History class and said she learned things she hadn’t known previously, including how the Mexican-American War of the 1840’s affected the national divisions that eventually led to the Civil War.

Fulton is one of Knox County’s most diverse high schools, and Banks said that even for students who are not African-American, O’Neill’s class is important for helping understand Black history. “I just think that class is a really good class and I highly recommend it for any and every student,” she said.

In between a video that featured a dancing robot and a hands-on assignment in which students practiced with tiny machines called Ozobots, Everitt highlighted Lyndsey Scott, a 36-year old, African-American programmer who is famous for designing mobile apps and is also a fashion model.

Everitt told her students that Scott is fluent in computer languages including C++, Java and Python, adding that “she started programming at the age of 12.”

Knox County teachers have also benefited from the expertise of community leaders and historians who have provided support to enrich the district’s curriculum.

Partners including Rev. Reneé Kesler, president of The Beck Cultural Exchange Center; Jack Neely, executive director of the Knoxville History Project; and scholars from the University of Tennessee-Knoxville Department of History have provided ongoing professional development that helps teachers to explore the rich diversity of American history.

This article was provided by the Communications Specialist for Knox County Schools.