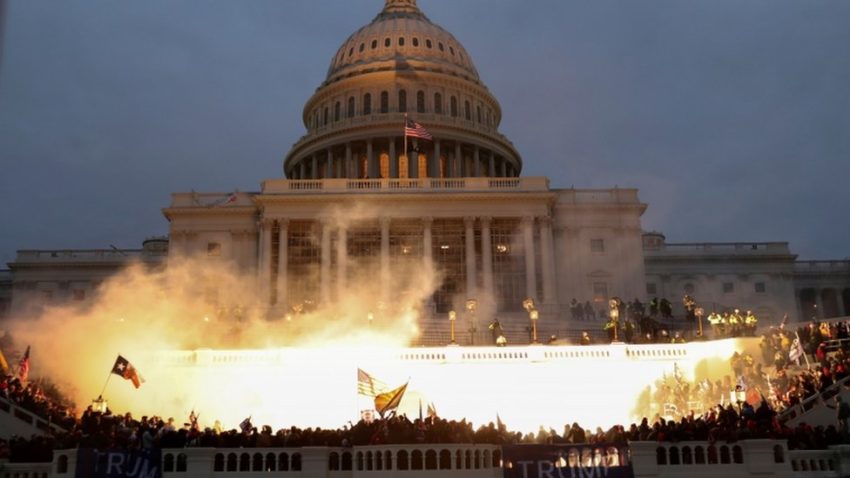 NATIONAL (January 11, 2021) – That this should happen at the Capitol, the People’s House, is a grave desecration of our democracy. Many of us know that the Capitol was built by Black people, both enslaved and free. As Fred Beuttler, former Deputy Historian of the U.S. House of Representatives notes, every step of the building of the Capitol was crafted and laid by Black men, from clearing the land before the cornerstone was laid to quarrying the stone, to forging the Statue of Freedom atop the Capitol dome. In this house that Black Men built, a White man carried a large Confederate flag into the hallways and offices– a symbol of enslavement and White supremacy that never made it into any D.C. federal building during the Civil War from 1860-1865.

Another display of white supremacist iconography among the rioters was a sweatshirt that read, “Camp Auschwitz – Work brings freedom,” which is a rough translation of the German lie inscribed on the gates to Auschwitz during the Holocaust, where 6 million Jews died. And outside the Capitol, gallows were constructed and a noose hung, while the mob called for lynching Vice President Mike Pence.

“Every step (design and construction) of the building of the Capitol was crafted and laid by Black men, from clearing the land before the cornerstone was laid to quarrying the stone, to forging the Statue of Freedom atop the Capitol dome.”  – Fred Beuttler, former Deputy Historian of the U.S. House of Representatives
There are so many emotions to feel in light of these facts. Many of us are tired and traumatized. We may be heartbroken or depressed. Few of us are surprised because Black and Brown folk have been reading the tea leaves for some time now. And yet, many of us are also enraged.
I counsel you, my NCNW family, to channel that rage. As Sikh American activist Valarie Kaur wrote just days after the Capitol insurrection, “If you feel rage, if you need to cry or scream, it’s okay. In the face of oppression, cruelty, injustice, white supremacist violence, assaults on our safety – I call that divine rage. It is the rage flashing in the eyes of Jesus…. The aim of divine rage is not vengeance, but to reorder the world. Our task is to make sure that the rage we’re feeling doesn’t explode. We cannot become what we are fighting against. We need to harness it, and channel it into nonviolent action. Do as Audre Lorde calls us to do – dance with it. Focus it with precision and power.”
My beloved sisters of NCNW, we must now focus our divine rage to reorder the world.
That starts with getting answers to many questions about the events of January 6th – a day that will now live in infamy – so that we may hold those responsible accountable.

There are also deeper questions that we must not shrink from asking as we seek to heal our nation from this trauma. We must look deep into our souls and then we must engage in the kind of action that will lead to long overdue and fundamental changes in our country.

To say that a change is needed in our personal and national perspectives when it comes to the value of human life is an understatement. We must find the courage to act with the truth as a shield and a sword. Regardless of whatever divisions we choose to use that separate us into factions, races, religions, or otherwise, our common human connection surpasses them all by far. It is with one voice that we need to speak in thunderous outrage and not let what is becoming commonplace continue.

Mourning is a natural state when someone is lost. But, action in the aftermath of that loss breeds new meaning into their memory and purpose to be passed to the next generation. This is a path that cannot be walked alone for so much can be accomplished if we do it together.

I do not know the answers to all of these questions. But I have faith that our Beloved Community—to use that expression made popular by Dr. King, whose birth we celebrate next Monday–our Beloved NCNW Community is capable of all manner of greatness when we are connected, organized, and focused. When we are, there is nothing Black women cannot do.

I also take solace in these words from the Talmud, the primary source of Jewish religious law and theology, which speak to what I believe is the unifying philosophy of all agents of change and goodness in the world, and that I now share with you:

Do not be daunted by the enormity of the world’s grief.
Do justly now. Love mercy now. Walk humbly now.
You are not obligated to complete the work,
but neither are you free to abandon it.
Finally, let us heed Rev. Warnock’s words from his victory speech, where he shared how his father would wake him up every morning at dawn: “But it was still dark,” he said. “It’s dark right now. But morning comes. And scripture tells us weeping may endure for the night, but joy comes in the morning. Let us rise up, greet the morning, and meet the challenges of this moment. Together, we can and we must do the necessary work and win the future for all of our children.”
Onward!
Spread the love