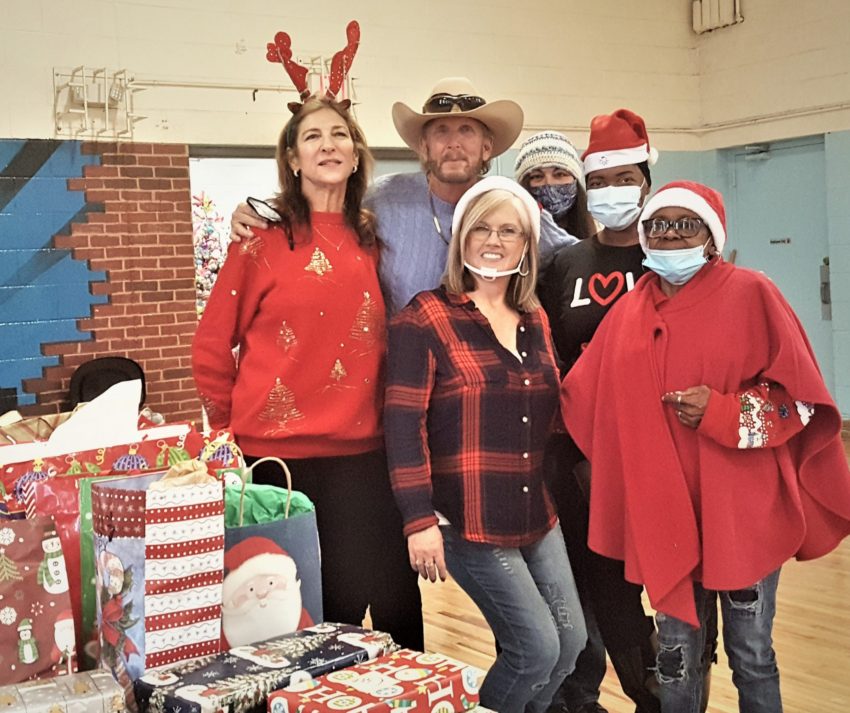 KNOXVILLE, TN (December 2020) – COVID didn’t stop the spirit of Christmas. Despite the hardships of 2020, it came. Despite a pandemic, it came. The celebration of the reason for the season, Christmas came anyway. Thanks to the efforts of collective community partners.

It’s no surprise that Alice “Lady” Ladd and Michael McMeel of Inner City Slickers, along with volunteer elves were on-hand to COVID safely distribute the gifts to area children.

Over 75 children, accompanied by parents, were gifted with an age-appropriate gift bag or wrapped gift, along with a stuffed animal donated by PetSmart.

For over 40 years, Lady Ladd has strived to keep inner-city children out of trouble by offering them hope and something to look forward to. She counters the lack of recreational and community resources available to inner-city youth by exposing them to the world outside of the restrictions of the inner-city. But most of all, she wants them to know that somebody cares about them.

In summers, Lady Ladd charters a bus for inner-city children to enjoy a retreat to a Kentucky water park, Six-flags over Georgia, and other activities beyond the confines of their neighborhoods.

In recent years, Lady Ladd Kids have also enjoyed a visit to the Inner City Slickers Ranch in Tazewell, Tenn., which included a visit from Santa with gifts, a sit-down meal, and recreation.

COVID-19 in 2020 did not stop Christmas from coming. Instead,  it came early by a group of Santa’s helpers that included: Lady Ladd, Michael McMeel, and volunteers who set up shop at the Boys and Girls Club at Taylor Homes.

In 2012, Michael McMeel moved from California to Tazewell, Tennessee to establish a branch of his Inner City Slickers Ranch. He and Lady Ladd connected through their mutual mission of supporting children.

“It’s all about the children, they are our future,” said McMeel. “Everywhere I go, across the country, there is little to nothing provided for children to do.

McMeel, originally from Colorado, established a successful career as a professional drummer. In 1978, he landed a stint with the popular rock band 3 Dog Night.

On his journey, he also worked as an actor that included a series of children’s programs that occasionally featured horses. He enjoyed watching the children “light-up” when horses were in an episode.

McMeel was living a comfortable life in California. He had never ventured beyond his posh lifestyle among the upper-crust in Los Angeles into the inner-city – until the 1992 Los Angeles riots.

“I had never been there before, but I needed to know for myself, what was going on and why,” said McMeel. He learned that the riot was sparked by the exoneration of four LAPD officers who were caught on tape brutally beating Rodney King, a compliant, unarmed black man.

McMeel was taken aback by what he experienced. He said that it exposed him to the plight of inner-city citizens. “There was nothing for them to do, nowhere for them to go, no outlets, recreational facilities, or safe areas for adults or children,” said McMeel.

“When I went there, I saw and met a bunch of great people. I started putting programs together for kids. In the process, he recalled the children’s joy when horses were on the set. A memory became that became a reality.

McMeel and his wife Elinda first rented a ranch in California to take children from the inner-city to. The expense of the venture compelled them to start a ranch of their own. That was the birth of The Inner City Slickers Ranch, a name inspired by the 1991 and 1994 movies “City Slickers.”

In 1992, the McMeel’s established The Awareness Foundation, a non-profit charity with the mission of working with ”at-risk” youth to build character, integrity, and self-esteem by combining the magic of horses with cowboy ethics. Inner City Slickers (ICS) functions under the TAF umbrella.

Another program recently added is Cowboys In the Hood. CIH is an effort to renovate neighborhood churches and community centers throughout our cities. It consists of trained professionals in all aspects of construction who are committed to the rebuilding of our cities one building at a time. If you would like to be part of or contribute to this mission, visit http://innercityslickers.com/.