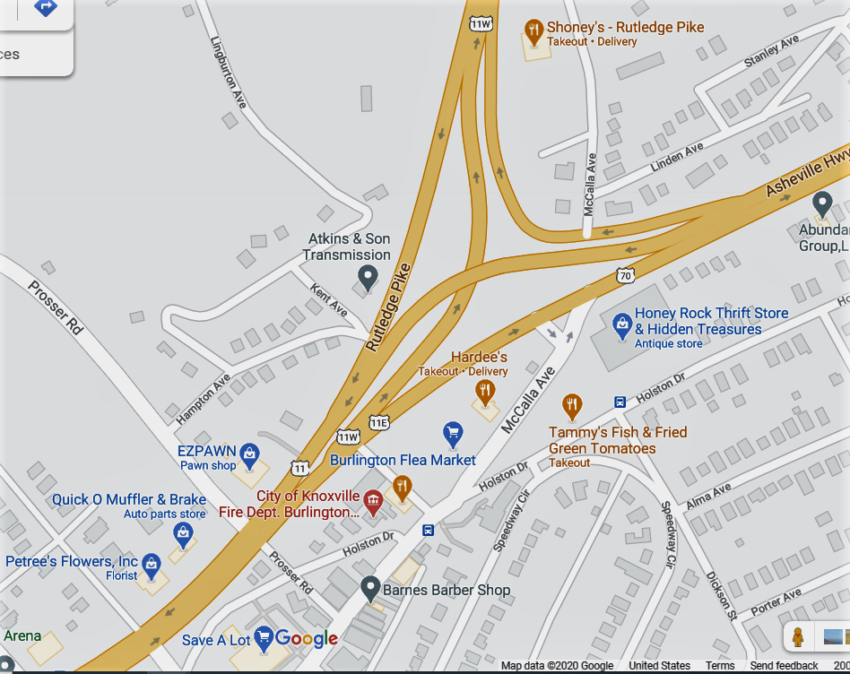 Much needed improvements will soon be underway at the "Y interchange" (near Prosser Road at Hardee's) at Magnolia Avenue at Rutledge Pike and Asheville Hwy. (Photo Google maps)

Since 2009, the City has been looking at ways to improve the Y-shaped configuration where Magnolia Avenue (between Prosser Road and Hardee’s) splits into Rutledge Pike and Asheville Highway.

The City’s engineering consultant, Gresham Smith and Partners, presented a conceptual plan to neighborhood groups and stakeholders on Dec. 14 via an online community workshop. The plan included recommendations to improve the nearly 60-year-old state interchange.

The presentation is available on the City’s website, condensed into a 6.5-minute short video: https://bit.ly/3rlbm3m.

Additional information, including a project update, technical memos, displays from an Oct. 30, 2019, open house, and a Burlington Enhancement Plan presentation, are available at www.knoxvilletn.gov/projectmeetings.

This study, which identifies recommendations for short- and long-term improvements to the interchange, has not yet been finalized. The City’s Office of Neighborhood Empowerment, which has convened six stakeholder meetings so far, is soliciting additional feedback. Residents, business owners and other stakeholders are encouraged to watch the video and email ideas or comments to neighborhoods@knoxvilletn.gov.

Since 2009, the City has been looking at ways to improve the Y-shaped configuration where Magnolia Avenue near Prosser Road splits into Rutledge Pike and Asheville Highway.

The current interchange has been criticized by some stakeholders because it limits turning movements by motorists. Those traveling southbound on Rutledge Pike trying to go east on Asheville Highway have to make a U-turn at Prosser Road or cut through small residential streets.

Another problem is that the existing interchange is sprawling and can’t be safely crossed by pedestrians or bicyclists.

The goal of the City and Gresham Smith in redesigning the interchange is to build a community-desired connection to the Burlington commercial district. The current interchange creates a physical barrier that bisects the area when the objective should be to complement the surrounding urban, walkable neighborhoods and connect them.

Two main designs were considered – one that would slightly reroute Rutledge Pike to connect more traditionally to Magnolia Avenue and Asheville Highway, and a second alternative that would rely on a multi-lane roundabout.

Being state highways, input from the Tennessee Department of Transportation was sought. The City supports a recommendation for a traditional signalized intersection, rather than a roundabout, for multiple reasons:

The preferred design also would preserve more green space while providing a direct link to Holston Drive and Martin Luther King Jr. Avenue, according to City traffic engineers and Gresham Smith. The plan envisions 10-foot-wide shared-use paths for pedestrians and bicyclists on both sides of roadways around the intersection.

Currently, City departments are looking at recommendations for short-term connectivity improvements in the area. The City anticipates a partnership with TDOT, which will involve more public engagement during the design stages.