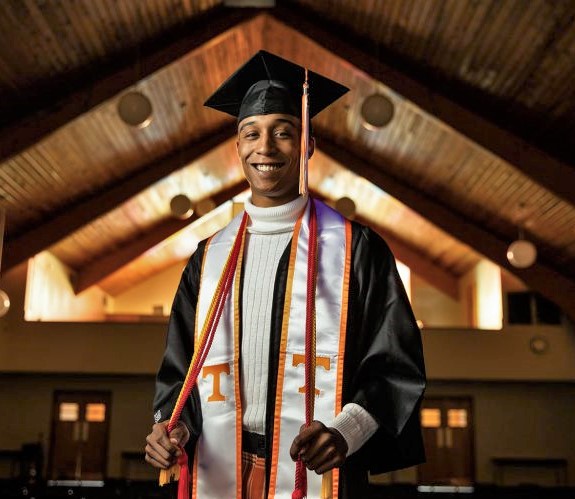 First-gen college graduate KoJak Wells is outspoken about the value of education after his experience in the Haslam College of Business. (Photo by Steven Bridges/University of Tennessee, Knoxville.)

KNOXVILLE, TN (Nov. 18, 2020) – Five years ago, KoJak Wells was in the stockroom of a Dollar General Store pushing aside storage containers to make room for a small picnic table and two plastic crates where he and his fiancée would sit to eat the double-decker fast-food tacos she’d bring for their makeshift lunch dates.

“We couldn’t afford real dates back then,” says Wells, a transfer student who is days away from earning his bachelor’s degree in business administration from the University of Tennessee, Knoxville.

At the time, Wells was a shift supervisor at Dollar General and made extra money substitute teaching and playing piano at three area churches. His fiancée, Kayla Bishop, now a junior studying economics at UT, worked two jobs and was pregnant with their first daughter, Kai, now four years old. The family welcomed their second daughter, Koi, two years later.

“I don’t know why, but I didn’t ever think about college before that,” Wells says. “I just kept thinking, ‘Work more jobs, work longer hours.’ I had no idea what was out there for me. It’s like there was this whole other level, and I was just settling in the gap that kept me from it.”

With a family to support, Wells altered course.

He signed up for classes at Pellissippi State Community College, and for three years he hardly blinked. He tutored math and business, served as student body president, and was elected chair of the statewide executive advisory board for college and university student body presidents. By the time he received his associate’s degree, he had accumulated three times the service-learning hours required to graduate with a medallion of distinction.

Well’s next step took him to UT’s Haslam College of Business. It is there that his dreams for the future began to take shape – for him, his family, and the community he now seeks to reach with a message about the way education can transform lives.

“The Haslam leadership courses shaped me into a leader,” says Wells, who will become the first in his family to earn a four-year degree when he crosses the stage at Thompson-Boling Arena on Sunday, November 22. “And not just the leader I am today. They’re shaping me into the stronger, more engaged leader I can become in the future.”

Wells, the oldest of six siblings, was born with potential in his blood. His great-grandmother Gloria Garner was one of the Knoxville Area Urban League’s first employees, a respected civil rights figure with a street in the Lonsdale community named in her honor. At Apostolic Christian School, which Wells attended through high school, he placed in national science competitions and excelled in track and piano. But it took years before he felt the motivation to pursue something greater for himself. Fatherhood ultimately lit that fire.

“My family is the only thing that keeps me going,” Wells says. “They’ve watched every step of this journey. When I’ve been sick and stressing myself out to make a 4.0, Kayla’s been the one who would say, ‘Baby, it’s not going to be much longer now. We’re going to make it.’”

Ryan Farley, clinical assistant professor of finance, had Wells in his 400-level investment and portfolio management course in the fall of 2019 and knew very quickly there was something special about him.

“It’s not just charisma,” Farley says. “It is charisma matched with hard work and technical skills that sets him apart.”

Farley suggested that Wells apply for Torch Funds, a program he oversees that allows finance students to manage a $3 million portfolio of securities donated by generous alumni. For the past two semesters, Wells has served as an investment analyst and portfolio manager for the Carroll Funds, a $600,000 portfolio belonging to alumnus Larry Carroll (’78), a fellow first-generation college graduate and the founder and CEO of Carroll Financial Associates.

Earlier this month, during a final presentation to donors and members of Torch Fund Advisory Board, Wells was so impressive that two individuals asked for a professional introduction. Farley wasn’t surprised.

“Like anything in life, a big differentiator between those who are successful and those who don’t meet their goals is seeing the challenges on your plate as an opportunity to prove you belong where you are,” Farley says. “It’s tough to go to school when you have kids. It’s hard to be a first-gen student when you don’t have exposure to the world some of your classmates do. Sometimes you only get one chance, and KoJak knows that. It’s what motivates him.”

In the next few months, Wells will move with his family to Cincinnati to begin a position as a financial brand manager for Procter & Gamble, among the largest consumer goods companies in the world.

“KoJak embodies what our land-grant mission was designed to do. It’s to give people access to opportunities,” says Tyvi Small, UT’s vice chancellor for diversity and engagement.

He had met Wells when the two worked together to secure internships for at-risk youth through Project Grad in 2018, while Wells was still at Pellissippi. Recognizing his potential, Small says, he “put on the full-court press” to recruit Wells to UT.

“We do the work to support our students and advocate for them so they get to have moments like he does right now,” Small says.

Wells works to follow Small’s example of mentorship and advocacy. He has helped raise funds and serves as a board member for the Zaevion Dobson Foundation, volunteered as a volleyball coach at Austin-East High School, and spoken about the risks affecting youth in Knoxville and the value of education to create new opportunities in people’s lives.

Wells applies these lessons in his own family, too. After he graduated from Pellissippi, his fiancée enrolled there and became the first in her family to earn an associate’s degree. She hopes to graduate from UT next year with her bachelor’s degree. When the couple studies together at night, their daughters sit beside them reading—a family that studies together succeeds together, Wells believes.

“Our kids know how important it is to learn and go to school,” says Bishop, who is eight months pregnant with the couple’s third daughter. “We’ve been in school the entire time they’ve been alive.”

That gap Wells imagined—the one that separated him from the life he wanted—manifests in different ways. It is the gap of five years. It is the gap from single man to partner and parent. It is two images: one of Wells in a Dollar General stockroom, the other of him in a cap and gown becoming the first in his family—though likely not the last—to become a college graduate.

“Being a Volunteer taught me that the limits we place on our lives are solely limited to the goals we set,” Wells says. “That’s why Vols dream big.”