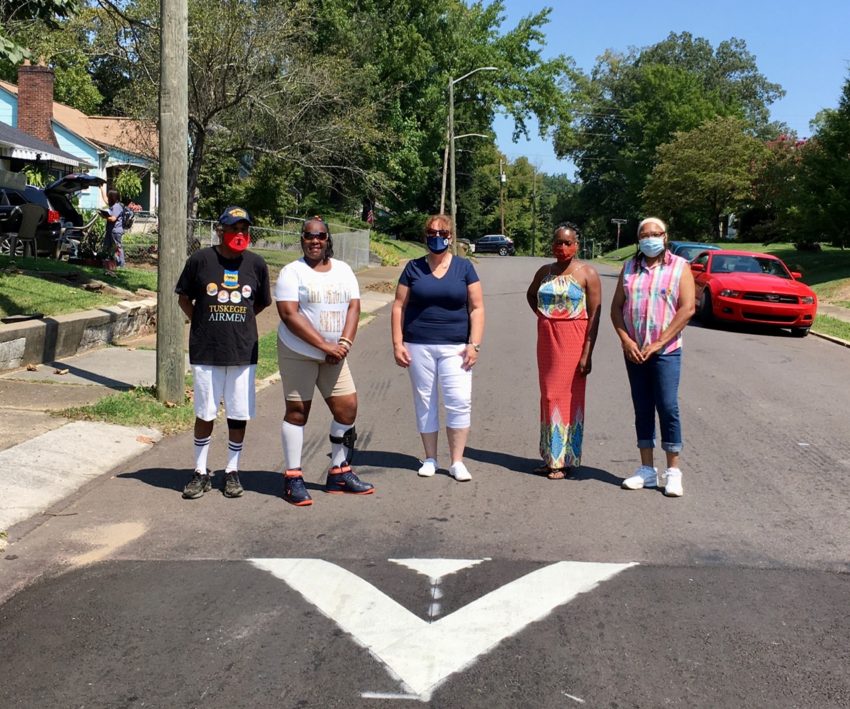 The  City of Knoxville budget for 2020 allowed for 6 neighborhood traffic calming projects – with one in East Knoxville. 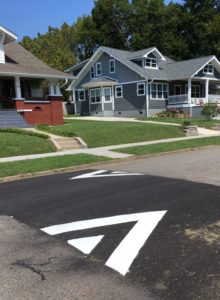 Knoxville, TN (September 2020) – As recently as a few months ago, day and night, impatient (or thrill-seeking) motorists would speed at 60 mph along the straight-as-an-arrow Woodbine Avenue in East Knoxville.
On East Fifth Avenue, the same thing: Cars would go too fast, and daring motorists would aggressively pass slower-moving cars on the residential street.Residents of the Chilhowee Park Neighborhood Association decided several years ago to do something about it. They met, shared near-miss horror stories, petitioned and collaborated with the City’s Office of Neighborhoods and Traffic Engineering.

As part of the City’s Neighborhood Traffic Safety Program – visit www.knoxvilletn.gov/trafficsafety – more than a dozen speed humps were strategically constructed down Woodbine and East Fifth this summer.

“We’ve wanted this for 20 years,” said Sherene Jacobs, president of the neighborhood association, who lives near Chilhowee Park and also owns Perk City coffeehouse on Magnolia Avenue, adjacent to the park. “Almost everybody is on the same page in wanting the speed bumps.

“We’re happy. It’s made a big difference. With the cars going 60 and 70 mph, we were afraid for children being out – that a car might come up on the sidewalk even. Now, you’ll see the kids playing outside. It’s much safer.”

Singer and WUOT Jazz Jam host Kelle Jolly, another resident who supported the traffic-calming devices being installed, agrees. “It’s definitely made a difference,” Jolly said. “Cars have slowed down. It feels safer to me. It’s easier to walk up and down the street, or to more safely ride a bike, or walk a dog.”

Jacobs said safer streets is a critical quality-of-life issue in her neighborhood, which she describes as welcoming and robust. “It’s a mixed neighborhood,” she said. “There are a lot of older people, but also hipster people in their 30s. A lot of people are drawn by the historic houses – they date to the early 1900s. It’s just a quiet, nice neighborhood. And the people who live here are extremely friendly.”
This past year, the City of Knoxville completed six traffic-calming projects as part of the Neighborhood Traffic Safety Program. The program, a joint effort by the City’s Office of Neighborhoods, the Engineering Department, and residents, is designed to help neighborhoods address traffic-calming issues and apply for engineered traffic-safety solutions.

The $200,000 allocated for traffic calming has been tapped out for now, but funding for additional projects is anticipated in future years.

Eden Slater, the City’s Assistant Neighborhood Coordinator, encourages neighborhood residents to start the application process now because building consensus and the City developing a traffic solution takes several years. In fact, due to a large number of applications in process and limited funding, it typically takes three to five years for a traffic-calming project to move from concept to design to installation.

The lengthy process requires building support and signatures from your neighbors, submitting pages of paperwork to the city for evaluation, instituting a “Slow Down in K-Town” yard sign campaign. Then if approved, city engineers will be dispatched to validate the years-long problem in your neighborhood. Your request will then be added to a 3-5 year waiting list:

As one Chilhowee Park area resident put it, “The speed humps have changed the whole vibe of our neighborhood. I see people out walking and utilizing the streets again.”

“Developing a neighborhood-specific traffic-calming plan is intricate and requires effort, dialogue, and collaboration,” Slater said. “People interested in the Neighborhood Traffic Safety Program should go online and familiarize themselves with what the process entails. Please contact the Office of Neighborhoods. We can help navigate through the process and share what’s worked well in other neighborhoods.”

With a large number of applications from neighborhoods, the new process and limited funding take three to five years for a traffic-calming project to move from an application to a concept, design, and installation.