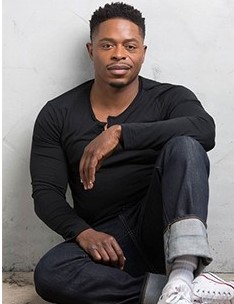 The world’s first 24-hour virtual coworking community with built-in video conferencing has attracted the attention of ABC’s “Shark Tank”, Robert Herjavec, as well as celebrities and influencers seeking an alternative platform to Zoom.

Nationwide (Sept. 30, 2020) — The world’s first 24-hour, global virtual coworking community has announced Kareem Grimes, an actor from the hit television series All American and S.W.A.T. as its first official Corporate Ambassador. Grimes, who is a tech entrepreneur and the founder of the popular FacePop app, will represent Virtual Coworking in a series of ads and host webinars on the platform as well.

“I’m very excited to serve in the capacity of Corporate Ambassador for Virtual Coworking. The decision was easy because this platform is true to my brand—not to mention its Black-owned. I’m also in the tech space, so I know how to spot a disrupter. Virtual Coworking is definitely disrupting the coworking industry as we know it,” states Grimes.

Virtual Coworking was founded in March of 2020 by Matthew Newman— the Founder of All In Coworking of Inglewood—and Olivia Jade Khoury, the Founder of ntflwr™ nomadic creative house for women. The two initially created Virtual Coworking as an alternative coworking environment as a result of COVID-19, but quickly realized the platform’s intrinsic long-term value.

Within one month of launching, co-founders Matthew Newman and Olivia Jade have been featured on ABC’s Localish across the country and were even invited to meet with ABC’s Shark Tank, investor, Robert Herjavec— who offered sound business advice to the founders.

“It was an honor to be invited to sit with a Shark,” shares co-founder Olivia Jade. “We heeded Robert’s advice and continue to implement features that add value to our global, virtual coworking community.”

“We’re definitely on a fast track,” says Virtual Coworking co-founder, Matthew Newman. “We quickly realized there was no one else in this space and we proceeded to fill the void that was created when COVID-19 suspended face-to-face interaction.”

The announcement regarding Kareem Grimes comes as Virtual Coworking premieres version 2.0 of its platform just eight weeks after its initial launch.

“I look forward to interacting with the Virtual Coworking community. I’m on the platform to learn, as well as share,” states Grimes.