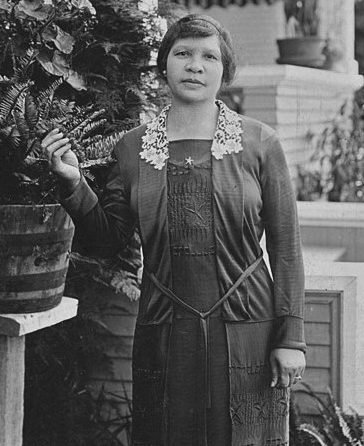 Charlotta Bass was a political activist and journalist who became the first African-American woman to run for Vice President of the United States of America in 1952.

Charlotta Spears Bass was born on February 14, 1874, in Sumpter, SC; graduated high school in Providence, RI. She was an educator, journalist, newspaper publisher-editor, and political activist. She is the first  African-American woman to own and operate a newspaper in the United States, the California Eagle from 1912 until 1951.

In 1952 she became the first African-American woman to run for Vice-President of the United States.

She began her career as a conservative Republican but her politics changed by the 1940s. Bass became more progressive and abandoned the Republican party due to what she said was their inability to address the concerns of the rights of Black people and women. So Bass aligned with the Progressive Party.

Bass supported Henry Wallace in the 1948 election as the Progressive Party presidential candidate. Wallace formerly served as Secretary of Agriculture, Secretary of State, and Vice President under Franklin D. Roosevelt.

Four years later in 1952, Bass was a nominee for Vice President. “It is a great honor to be chosen as a pioneer. And a great responsibility. But I am strengthened by thousands on thousands of pioneers who stand by my side and look over my shoulder—those who have led the fight for freedom—those who led the fight for women’s rights,” Bass once said.

Though she knew her chances were slim, only receiving 140,000 votes, Bass was undeterred. However, despite this “defeat,” Bass is as much of a prominent figure in the historical context of Black women running for office before Fannie Lou Hamer and Shirley Chisholm.

The United States Progressive Party was founded in 1912 by former President Theodore Roosevelt after breaking away from the Republican party. It was a breakaway faction from the Republican Party and based its ideas mainly on the Democrats’ and similar parties from the 1912 election. The ideological basis of the party was progressivism and neo-nationalism.