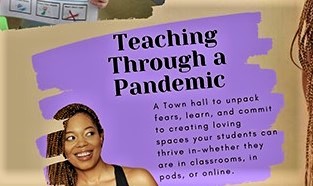 Nationwide BlackNews (Aug. 3, 2020) — Experiencing a pandemic may be new to some of us, but it is not a new experience for many other countries in the world. In fact, North Carolina-native, Gahmya Drummond-Bey taught through two pandemics while teaching in South Korea.

Upon realizing that she had valuable information to share, Gahmya has been creating educational posts regarding ways to help educators of children and teens to continue to thrive during pandemics. Her posts have become viral across social media.

“I became aware that I could and should do more and decided to verbally walk families and educators through what has worked for me, while also connecting them to stories from educators in Asia right now who have already returned to school,” said Drummond-Bey. “I am not for children or educators returning to school right now. But, if they must, I want to provide as much help as I can.”

Gahmya Drummond-Bey will be holding a virtual Town Hall meeting with other experts to prepare educators and parents for what is to come. The meeting will take place via Zoom on August 7th from 6pm-8pm EST.

Inspired by a 2009 statement by former President Barack Obama about the success of South Korea’s schools, Drummond-Bey traveled to schools around the world on a quest to uncover how kids learn. In May 2018, she revealed her findings to a packed crowd during a TED-Resident Talk in New York. She is also a two-time TEDx speaker.

Her passion is pushing humanity forward by providing access to impactful and transformative education. Drummond-Bey has spent 11 years traveling the world, during which time she has designed 60 textbooks that have been used in classrooms around the globe. Nicknamed the “celebrity teacher” by students in South Korea, Drummond-Bey believes that parents, educators, and leaders should inspire students to strive for and do more.