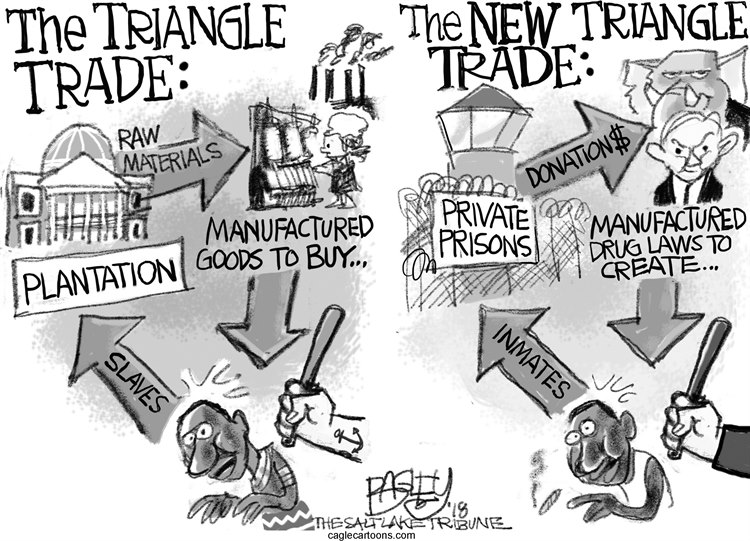 The American Negro is a prisoner of war. Of the race war started by Portuguese and Spanish conquistadors, and furthered by English, Dutch, and French pirates. We were Africans whom Europeans uprooted and brought to the New World and enslaved, notwithstanding the Maroons who never submitted to white mastery.

European settlers made war against Negroes by stereotyping us as “natural slaves” and forcing many of us into slavery. Since 1865 white Americans have warred against Negroes, essentially, by framing us as presumptive criminals, or vagrants. They deny us our Ninth Amendment right to presumed innocence. Nor have the British Crown, U.S. government, and estates of former slave lords ever paid reparations to us for slavery and for their unjust enrichment by way of apology and restitution. Nevertheless, the notion that we Negroes are still POWs may seem farfetched to the reader.

Consider just war theory, which “justifies” the conqueror who enslaves captives taken in war. It “justified” Europeans enslaving Indians and then Africans in the New World. Thus captivity distinguished slavery from servitude. The captor had absolute power over the captive slave, which the master did not enjoy over the indentured servant.

We overcame slavery. But war persists. For we have not yet overcome Aryan dominion. British political scientist John Locke described war as a state of enmity and destruction where one party attempts to put another party into their absolute power. One party designs to take away the freedom of the other by force. Locke defined slavery as the “state of war continued, between a lawful conqueror, and a captive.” Slavery is the continuation of war by other means.

Although the slave lords delimited Black lives, they never defined them. Slavery was a state of war. But it was also a negotiated relationship that varied from region to region and from era to era. Until 1700 or so, the colonies that later became the USA were societies with slaves in that slaves were marginal to GDP. Slavery was just one form of labor among many. The slave lords were a fraction of the propertied elite. Negroes were indentured servants perhaps more often than they were slaves.

But the slave society patterned by Virginia and South Carolina made slavery central to GDP. The master-slave relationship modeled all relationships. Slave lords commandeered the ruling class from their tobacco and rice plantations. Slave codes consolidated their political dominion. Locke drafted South Carolina’s constitution, a blueprint of slave society. He had invested in King Charles II’s Royal African Company, which monopolized the slave trade.

A historian, Stanley Elkins, compared the plantation to the Nazi concentration camp. He argued that slavery totally demoralized the Negro and produced the unredeemable Sambo stereotype. This is misdirection. For exploitation not abuse, was the essence of slavery. It was designed for the extraction of labor, not genocide. Slave lords were more capitalist than sadists. They maximized profit. Nor were Negroes mere tortured victims. For the planter used the carrot as well as the stick to motivate his workforce. The arbitrary power that slavery gave one group over another, in and of itself, was the evil. The slave lord as such was the villain. Not Simon Legree.

But we Negroes no longer live in the society with slaves nor in the slave society. Since the 1865 ratification of the Thirteenth Amendment, which ended slavery “except as a punishment for crime whereof the party shall have been duly convicted,” we have endured the vagrant society. Antebellum slave codes and militias and slave patrols had terrorized slaves and presumptive slaves and Maroons. Black Codes and national guards and police departments as well as KKK-styled vigilantes terrorize vagrants and presumptive criminals and Maroons (a fugitive black slave of the West Indies and Guiana in the 17th and 18th centuries and descendants) now. Freedom ever eludes us.

When I say that we Negroes are and ever were POWs, I mean that Wasps (White Anglo-Saxon Protestant) and their minions have not relented in their attempt to vanquish and control us. In 1857 Dred Scott v. Sandford expressed the law of the land, that Negroes could not be American citizens and had “no rights which the white man was bound to respect.” The Fourteenth Amendment of 1868 conferred birthright citizenship and its privileges and immunities to the Negro. It was supposed to overturn Dred Scott. But then The Slaughter-House Cases of 1873 made privileges and immunities into a dead letter.

Congress intended privileges and immunities to give freedom of movement to Negroes. For liberty was first among the privileges and immunities. National citizenship would ensure Negro freedom of white supremacist jurisdiction under the guise of “states’ rights.” The former Confederate states had instituted Black Codes to frame Negroes as vagrants for purposes of neo-slavery, or “debt peonage.” The Fourteenth Amendment superseded these Codes.

Then Slaughter-House made Fourteenth Amendment “privileges or immunities” redundant. By denying its natural rights content, the Supreme Court subverted congressional intent. The court revived Dred Scott. “States’ rights” triumphed. The Black Codes stuck. The former Confederate states became police states. And so the Negro has no privileges or immunities which white men need respect. Including freedom.

Eighteenth-century British lawyer William Blackstone, perhaps America’s leading authority on the common law, defined liberty as “the power of locomotion, of changing situation, or removing one’s person to whatsoever place one’s own inclination may direct; without imprisonment or restraint, unless by due course of law.” Thus freedom means unrestrained movement.

Terry v. Ohio (1968) held that “stop-and-frisk” is constitutional so long as the police officer has “reasonable suspicion” that the person is about to commit a crime, has committed a crime, or is committing a crime. Whren v. United States (1996) held that any traffic offense whatsoever legitimizes a traffic stop. Both Supreme Court cases give license to anti-Black bias through police.

Important as these cases are, Dred Scott and Slaughter-House pivot American law regarding the Negro. Dred Scott sanctioned the slave society. Slaughter-House consolidated the vagrant society. Terry reframed vagrancy to neutralize the threat to the Establishment posed by civil rights and human rights during the 1960s. Whren took the police state to the roads and highways.

The “vagrant” was created by fourteenth-century English common law. The nobles passed the Statute of Laborers in 1349 to suppress wages that had skyrocketed due to scarce labor and bubonic plague. The Statute framed “idle and disorderly persons, rogues, and vagabonds, and incorrigible rogues” as vagrants. It prohibited them from leaving their places of employment unless they had letters validating their travels.

The Vagrancy Act of 1547 provided that vagrants could be enslaved for two years and fed bread and water. It was repealed in 1550, but the precedent was set. Terry and Whren effectively entrenched Negroes and some other colored peoples within vagrant status. They are judicially-legislated vagrancy acts. The loophole in the Thirteenth Amendment condoning slavery of the “duly convicted” makes it a vagrancy act too.

The Supreme Court has challenged vagrancy through the “void for vagueness” doctrine, whereby a criminal statute is void if a citizen of average intelligence cannot understand it: Papachristou v. Jacksonville (1972) and City of Chicago v. Morales (1999). But by the time the court decided these cases, its doctrine of “reasonable suspicion” had already given police officers despotic discretion regarding suspected criminals. Terry made America’s vagrancy statutes superfluous. Negro = vagrant under Terry’s racial profiling regime. Hence my earlier description of Terry as a vagrancy act.

Dred Scott persists as the law of the land.

And so here we are, exiled almost five centuries, POWs still. Slaves then. Vagrants now. Ever Maroons. What are “war on crime” and “war on drugs” and “mass incarceration” and “Black lives matter” but buzzwords and slogans glossing that fact?

Taru Taylor is an honors graduate of Case Western Reserve University School of Law. He was born in Knoxville’s Lonsdale community and was raised in the Maryland/D.C. area.