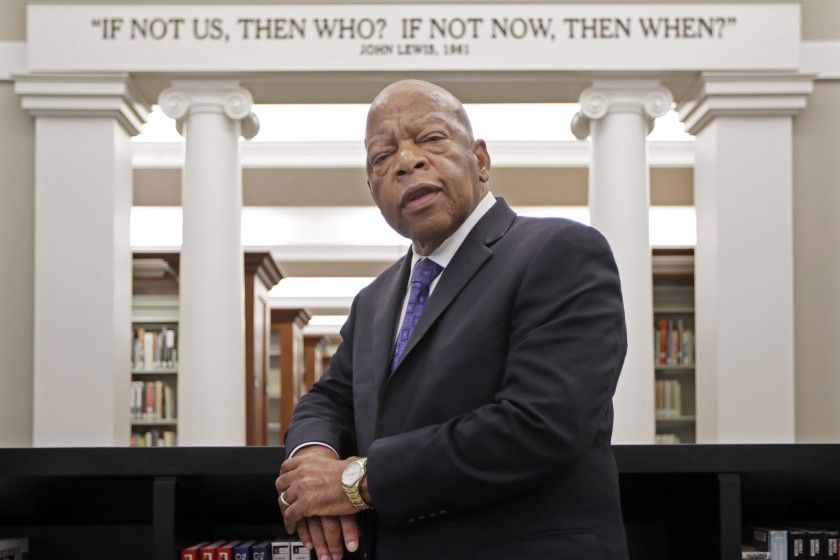 One of the “Big Six” leaders of the civil rights movement in the 1960s, John Lewis continued to fight for people’s rights since joining Congress in 1987.

NATIONWIDE (July 20, 2020) – Congressman John Lewis (D-GA) was often referred to as “one of the most courageous persons the Civil Rights Movement ever produced.” John Lewis dedicated his life to protecting human rights, securing civil liberties, and building what he called “The Beloved Community” in America.

His dedication to the highest ethical standards and moral principles  won him the admiration of many of his colleagues on both sides of the aisle and was called “the conscience of the U.S. Congress.”

Congressman John Lewis grew up in an era of racial segregation. Inspired by Martin Luther King Jr., he joined the burgeoning civil rights movement. Lewis was a Freedom Rider, was the youngest speaker at the 1963 March on Washington and led the demonstration that became known as “Bloody Sunday.” He was elected to Congress in 1986 and was honored by then President Barack Obama with the Presidential Medal of Freedom in 2011.

John Robert Lewis was born outside of Troy, Alabama, on February 21, 1940. Lewis had a happy childhood, though he needed to work hard to assist his sharecropper parents, but he chafed against the unfairness of segregation. It was a time when African-Americans had separate and substandard public fountains and substandard restrooms, had to enter from the back door of venues while paying the same fare, could not eat in white establishments or in public at the same table. The list goes on.

Lewis was in grade school when the 1954 Supreme Court ruling of Brown vs. The Board of Education became law and eagerly looked forward to the improvements to come in his school life. However, his home state of Alabama ignored the decision and did not enforce it. After hearing King’s sermons and news of the 1955-56 Montgomery bus boycott inspired Lewis to act for the rights granted by the Supreme Court to be implemented.

From an early age Congressman Lewis was dedicated to gaining the respect and equality that has been earned and granted to African-Americans. Over the course of his life he was instrumental in, and lived to see of the fruits of his labor.

John Lewis was a graduate of the American Baptist Theological Seminary and held a B.A. in Religion and Philosophy from Fisk University, both in Nashville, Tennessee.

As a student at Fisk University, John Lewis organized sit-in demonstrations at segregated lunch counters in Nashville, Tennessee.  In 1961, he volunteered to participate in the Freedom Rides, which challenged segregation at interstate bus terminals across the South. Lewis risked his life on those Rides many times by simply sitting in seats reserved for white patrons.  He was also beaten severely by angry mobs and arrested by police for challenging the injustice of Jim Crow segregation in the South.

Freedom Riders challenged the segregated facilities they encountered at interstate bus terminals in the South, which had been deemed illegal by the Supreme Court. It was dangerous work that resulted in arrests and beatings for many involved, including Lewis. On July 7th, 1961, John Lewis was released from Parchman Penitentiary in Mississippi after serving 37 days in prison for “disorderly conduct” — refusing to follow segregation law by using a white’s only bathroom.

During the height of the Movement, from 1963 to 1966, Lewis was named Chairman of the Student Nonviolent Coordinating Committee (SNCC), which he helped form. SNCC was largely responsible for organizing student activism in the Movement, including sit-ins and other activities.

While still a young man, John Lewis became a nationally recognized leader. By 1963, he was dubbed one of the Big Six leaders of the Civil Rights Movement.

In 1963, Lewis became chairman of the Student Nonviolent Coordinating Committee. That same year, as one of the “Big Six” leaders of the civil rights movement, he helped plan the March on Washington. Lewis was the youngest speaker at the event, and had to alter his speech in order to please other organizers, but still delivered a powerful oration that declared, “We all recognize the fact that if any radical social, political and economic changes are to take place in our society, the people, the masses, must bring them about.”

CAPTION (L-R) On March 7, 1965, John Lewis and Hosea Williams led a peaceful march to the county seat of Selma to vote. (First picture) Alabama state troopers followed the marchers from the rear, while (second picture) a brigade of troopers in riot gear awaited their arrival. The troopers strategy successfully pinning the marchers on the bridge from both sides then attacked them, which is historically known as “Bloody Sunday.”

The Civil Rights Act became law in 1964. However, this did not make it easier for African-Americans to vote in the South. To bring attention to this struggle, Lewis and Hosea Williams led a march from Selma to Montgomery, Alabama, on March 7, 1965. After crossing the Edmund Pettus Bridge, the marchers were attacked by state troopers. Lewis was severely beaten once more, this time suffering a fractured skull.

The violent attacks were recorded and disseminated throughout the country, and the images proved too powerful to ignore. “Bloody Sunday,” as the day was labeled, sped up the passage of 1965’s Voting Rights Act.

Lewis left the SNCC in 1966. Though devastated by the assassinations of Dr. Martin Luther King, Jr. and Robert Kennedy in 1968, Lewis continued his work to enfranchise minorities. In 1970, he became director of the Voter Education Project. During his tenure, the VEP helped to register millions of minority voters.

Lewis ran for office in 1981, winning a seat on the Atlanta City Council. In 1986, he was elected to the House of Representatives. Representing Georgia’s 5th District, he is one of the most respected members of Congress. Since entering office, he has called for healthcare reform, measures to fight poverty and improvements in education. Most importantly, he oversaw multiple renewals of the Voting Rights Act.

After Barack Obama won the presidency in 2008, Lewis stated, “When we were organizing voter-registration drives, going on the Freedom Rides, sitting in, coming here to Washington for the first time, getting arrested, going to jail, being beaten, I never thought — I never dreamed — of the possibility that an African American would one day be elected president of the United States.”

In the wake of the mass shooting that took place on June 12, 2016, in Orlando, Florida, Lewis led a sit-in comprised of approximately 40 House Democrats on the floor of the House of Representatives on June 22nd in an attempt to bring attention and force Congress to address gun violence by taking definitive legislative action.

“We have been too quiet for too long,” Lewis said. “There comes a time when you have to say something. You have to make a little noise. You have to move your feet. This is the time.”

The protest came just days after several measures including a bill regarding background checks and adding restrictions on the purchase of guns by people on the federal no-fly list, failed in the Senate. Senator Chris Murphy applauded the protest. Murphy had previously led a filibuster in the Senate which led to the subsequent vote.

Lewis also spoke out against the presidency of Donald Trump, who was elected on November 8, 2016. In an interview with Chuck Todd for NBC News’ Meet the Press, which aired on January 15, 2017, Lewis said he didn’t believe Trump was a “legitimate president” because of Russian interference in the election. “I think the Russians participated in helping this man get elected and they helped destroy the candidacy of Hillary Clinton,” Lewis said in the interview. He also said he would not attend Trump’s inauguration.

Trump responded on Twitter, criticizing Lewis’ work as a congressman and tweeting that Lewis was “All talk, talk, talk – no action or results. Sad!” The president-elect’s attack on Lewis came just days before the Martin Luther King holiday, and prompted vocal support of the civil rights icon across social media. Several lawmakers joined in support of Lewis and boycotted Trump’s inauguration.

Lewis also boycotted the inauguration of Bush 43 because he…thought it would be hypocritical to attend Bush’s swearing-in….he doesn’t believe Bush is the true elected president.

A spokeswoman for Lewis confirmed that he had missed the inauguration of George W. Bush: “His absence at that time was also a form of dissent. He did not believe the outcome of that election, including the controversies around the results in Florida and the unprecedented intervention of the U.S. Supreme Court, reflected a free, fair and open democratic process.”

In December 2019, Lewis announced that he had been diagnosed with Stage 4 pancreatic cancer. Although he was “clear-eyed about the prognosis,” Lewis said he felt encouraged that medical advancements had made this type of cancer treatable in many cases, adding that he intended to return to work as soon as possible.
Congressman John Lewis lived long enough to see the fruits of his labor and that of his colleagues for justice Dr. Martin Luther King, Jr., Malcolm X, John Kennedy, Jr, and many named and nameless others. Lewis passed away on July 17, 2020.Congressman John Lewis was married to Lillian Miles Lewis for 52-years until she passed in 2014. The made their home in Atlanta, Georgia. They had one son, John Miles.

The civil rights icon has also been honored with numerous awards, including the Presidential Medal of Freedom, the NAACP’s Spingarn Medal and the sole John F. Kennedy “Profile in Courage Award” for Lifetime Achievement.

In addition to continuing his work in Congress, Lewis reached out to a younger generation by helping to create a series of graphic novels about his work in the civil rights movement. In 2016, he won the National Book Award for the third installment in the series March: Book Three, which marks the first time a graphic novel has received the honor.

He accepted the award with co-writer Andrew Aydin and illustrator Nate Powell and spoke of its significance in an emotional acceptance speech. “Some of you know I grew up in rural Alabama, very poor, very few books in our home,” Lewis said. “I remember in 1956, when I was 16 years old, going to the public library to get library cards, and we were told the library was for whites only and not for coloreds. And to come here and receive this honor, it’s too much.”

He also spoke about the importance of books in his life. “I had a wonderful teacher in elementary school who told me: ‘Read, my child, read’, and I tried to read everything,” he said. “I love books.”

He is the author and/or subject of other books about his life:

The civil rights icon has also been honored with numerous awards, including the Presidential Medal of Freedom, the NAACP’s Spingarn Medal and the sole John F. Kennedy “Profile in Courage Award” for Lifetime Achievement.

John Lewis is the recipient of numerous awards from eminent national and international institutions, including the highest civilian honor granted by President Barack Obama, the Medal of Freedom, the Lincoln Medal from the historic Ford’s Theatre, the Golden Plate Award given by the Academy of Excellence, the Preservation Hero award given by the National Trust for Historic Preservation, the Capital Award of the National Council of La Raza,  the Martin Luther King, Jr. Non-Violent Peace Prize, the President’s Medal of Georgetown University, the NAACP Spingarn Medal, the National Education Association Martin Luther King Jr. Memorial Award, and the only John F. Kennedy “Profile in Courage Award” for Lifetime Achievement ever granted by the John F. Kennedy Library Foundation.