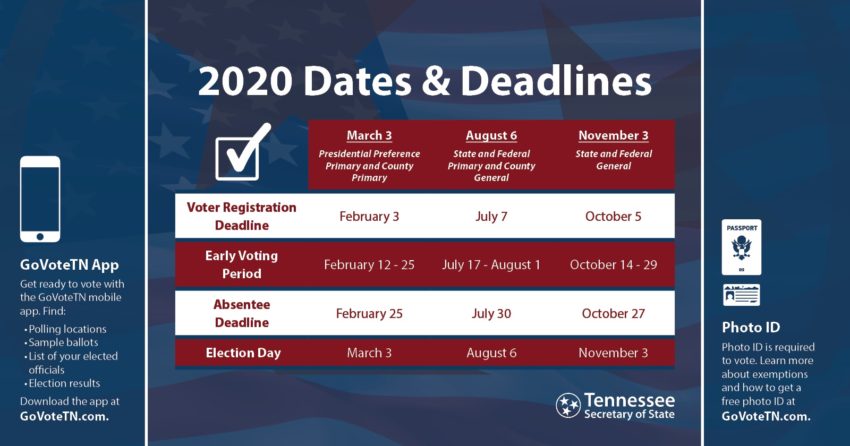 Secretary Hargett announces a new statewide campaign to recruit poll officials for the August 6 State and Federal Primary and County General Election. Tennesseans can apply now to join the campaign – Be a Poll Official.

Knoxville, TN (June 18, 2020) – The Knox County Election Commission is recruiting additional poll officials for the August 6 State and Federal Primary and County General Election. Workers are being sought for polling places as well as for the absentee ballot counting board. Knox County residents can apply online at www.knoxvotes.org or by calling 865-215-2480.

“Knox County residents have the opportunity to play a pivotal role in democracy by becoming a poll official for the August election,” said Chris Davis, Administrator of Elections. “This is an opportunity for anyone to serve both our county and our state and get paid for their efforts.”

Poll officials are compensated for working during early voting and on Election Day, as well as for attending required training sessions. Knox County election workers can make $200 for attending training and then working on Thursday, August 6.

Poll officials perform various tasks to help polling sites run smoothly, including greeting voters, answering questions, processing voters, and explaining how to cast a ballot. Any voter is eligible to apply, regardless of political affiliation.

Qualifications to be a poll official:

•    Be able to read and write in the English language

•    City of Knoxville or Knox County employees, unless working directly under the supervision of an elected official on the ballot

To work as a Knox County poll official, visit www.knoxvotes.org or call 215-2480. Become a Poll Official

Pursuant to the June 4, 2020 Order of the Davidson County Chancery Court, if you are a registered voter and do not wish to vote in-person due to the COVID-19 situation, you are eligible to request an absentee ballot by mail. You still have the option to vote in-person during early voting or on Election Day.

Click below to Vote-by-mail or to request an absentee ballot for the August 6, 2020 primary election in the following counties: