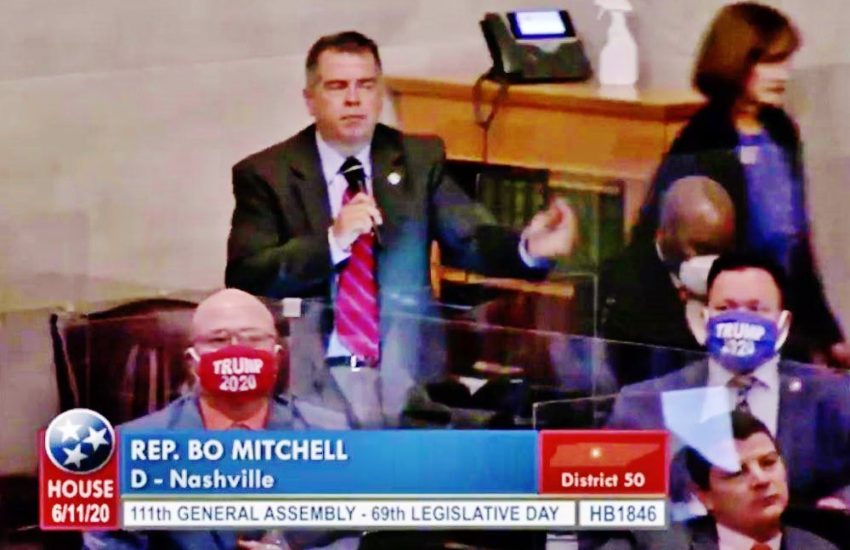 Nashville, TN (June 11, 2020) – I want to tell you a bit about what goes on in the legislature. Please remember that I am honored you sent me there, I am honored to be there, and I respect the fact that I am there to lift up all the voices of the people of my district and I would love to do that for another session.
I feel people should know what happens in Nashville, most of it can be streamed on the TN General Assembly website-both floor sessions and Committee meetings.
As our black members told stories of their families that were slaves and how horrible it felt to have to walk on to the House floor every day with NBF, a murdering, slave trading, grand wizard of the KKK, looking down on them, their feelings were again and again discounted by the GOP because their constituents would be offended if the statue were moved. Then over and over they got to hear that we shouldn’t move the statue, but I love you.
There is no love without respect, you don’t treat someone you respect by ignoring their feelings and their truth-our truth. I threw up in my mouth each time one of these white members said they loved our black members, but…
On the House floor, we have seen Rep Lamberth accuse the Democrats of stealing the election because they wanted absentee voting. Today we saw Rep Vaughn start to accuse Democrats of supporting terrorism (protesters), but our members shut that down. The Speaker did not stop any of this, though he has stopped Democrat’s speech multiple times this week.
While one Democrat was speaking on the floor and 2 GOP members knew they would be on camera, they put on trump 2020 masks to take the attention away from him. Campaigning on the House floor is illegal, yet they do not think the rules apply to them. The official House GOP Caucus even posted the video of them breaking the law.
We have rules against playing politics on the House floor, we are supposed to be doing the business of all the people, not engaging in partisan politics.
Also on the floor today, Rep. Robin Smith (Republican, Dist-26)  asked Rep. Sherrell (Republican, Dist-43) to read something recognizing a woman in the balcony. A woman from Knoxville he apparently did not even know. He welcomed her and read aloud a bio about her. Typically we recognize people in the gallery who are our guests from our district. It turned out to be my opponent from Knoxvlle. They were playing politics again on the House floor, and the Speaker did nothing.
I actually thought it was hilarious, it was so sophomoric and ridiculous. My caucus joked about returning the favor, I hope they don’t… no matter the ways they abuse their power, we are better than that. I don’t care about their mean girl games, the last thing I ever want to do is dishonor the legislature I am so honored to serve in.
Elections matter, make sure you know who you are voting for, do they value Tennesseans, or do they enjoy power and position over people.
When people tell/show you who they are, believe them.
Spread the love