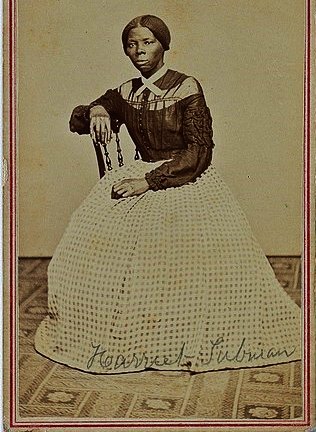 Harriet Tubman in the late 1860s nearing her retirement as a conductor on the Underground Railroad, and her work for the Union army.

Today March 10th is Harriet Tubman Day, a National holiday signed into law on March 9, 1990, by President George HW Bush. This is the date of her death. Born into slavery her birthdate is unknown. 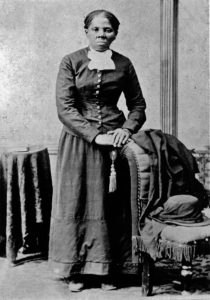 Harriet Tubman was born into slavery in Maryland between the years of 1820-1822. She was named Araminta “Minty” Ross and chose Harriet Tubman as her freed name after she escaped from slavery.

She suffered a head injury from a heavy object thrown by the slave owner at another slave. The injury is said to have given her “visions” from her deeply rooted African spirituality. In 1849 Tubman escaped slavery and made it to freedom in Pennsylvania. She dared to return South to rescue her husband, parents, and siblings. Although her former husband and parents didn’t join her on her first trip, some of her siblings and fellow slaves chose to go. It became a career for Tubman to transport slaves desiring freedom north to “free” states and/or Canada.

Despite legal documents that should have freed Tubman’s parents and her siblings from slavery when their original owner died, their new “owners” refused to honor the will of their benefactor and Tubman was unable to mount a successful legal challenge to their status as slaves, mainly due to a lack of money.

While leading others to freedom, Harriet longed to free her parents and other family members.

Tubman famously made 13 rescue missions into the slaveholding Southern states as a conductor in the network of safe houses for escaping slaves known as the “Underground Railroad.” She became known as a  freedom fighter and advocate for the abolition of slavery.

In 1858, although she never advocated violence against White people, even slave owners, Tubman assisted John Brown in the planning of the raid on Harper’s Ferry, Virginia, although she was not present for the actual raid.

When the Civil War began, Tubman worked for the Union Army, first as a cook and nurse, and then as an armed scout and spy. In 1863 she guided the raid at Combahee Ferry, in Beaufort  South Carolina, which liberated over 700 slaves. She was the first woman to lead an armed expedition in the war.

After working tirelessly for the Union and repeatedly risking her life in service to the United States, Tubman headed home after the end of the Civil War, only to be ordered to the smoking car of the northbound train she was riding on rather than be allowed to sit with White passengers. Tubman refused to change cars, explaining about her long service to the Union but was forcibly removed by the conductor and other people helping him, breaking her arm and causing other injuries in the process.

It was difficult for her and many other African-Americans to document their service. She wasn’t able to claim her pension until 1899 – 34 years later! Like many other African Americans who served the Union during the Civil War, Tubman was paid less than her White counterparts, and even then, sporadically if at all.

After the Civil War, she became a civil rights advocate for “all” women’s suffrage and voting rights for African-Americans, religious involvement, and established a home for aged African-Americans.

She retired to the family home on property she purchased in 1859 in Auburn, New York, where she cared for her aging parents. She was a civil rights advocate until illness overtook her and she was admitted to the home for elderly African-Americans that she had helped to establish years earlier.

Living on charity and in ill health in her last years, Tubman died of pneumonia on March 10, 1913, having achieved a degree of fame. After her death, she became an icon of African-American courage and freedom.

Numerous places and institutions have been named in her honor, and a 20th Century survey named her the third most famous civilian of the pre-Civil War period in American History, trailing only Paul Revere and Betsy Ross.

Many American schools bear her name, and a World War II Liberty ship was named in her honor. Tubman is a Saint in the Lutheran Church. The Episcopal Church honors Tubman (along with Sojourner Truth, Amelia Bloomer and Elizabeth Cady Stanton) in their Calendar of Saints (July 20); and the Evangelical Lutheran Church in America Calendar of Saints (along with Sojourner Truth) on March 10. Numerous other monuments, statues, awards and other honors have also been bestowed upon this most interesting of women.

In a 2015 groundbreaking decision under the administration of Pres. Barack Obama, the United States Treasury announced that Tubman’s likeness would be placed on the $20 bill, and would displace slave-owning President Andrew Jackson to the back of the bill. The plan called for new printings to start in 2020.

Design work on a Harriet Tubman $20 bill was well underway when the Trump-appointed Treasury Secretary Steven Mnuchin delayed distribution of the Tubman $20 from 2020 until 2028 claiming “more important” things to consider.

Did you know that March 10th has been Harriet Tubman Day for the past 30 years? Please take a moment to respond in the comments section following this article.