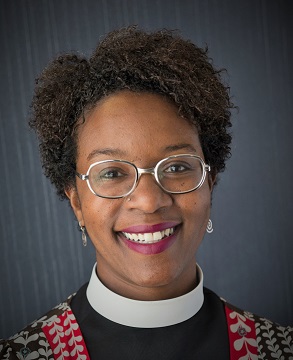 Rev. Canon Stephanie Spellers is a graduate of Knoxville's Bearden High and the University of TN.

The Rev. Stephanie Spellers is an Episcopal Church leading thinker and consultant of 21st century ministry and mission, and is Canon to the Presiding Bishop for Evangelism and Reconciliation.

Knoxville, TN (February 2020) – A community-wide annual worship service celebrating Blessed Absalom Jones and Black History Month will be at 5 p.m. on Sunday, Feb. 23, at the Episcopal Church of the Good Samaritan, 425 Cedar Bluff Road, Knoxville, TN 37923. The service will be led by the Rt. Rev. Brian Cole, Bishop of the Episcopal Diocese in East Tennessee.

The guest preacher, Rev. Stephanie Spellers, has a Knoxville foot-print. She is a graduate of Knoxville’s Bearden High School,  Middle Tennessee State, and the University of Tennessee. She also attended Wake Forest University, and Harvard Divinity School. She also worked as an intern and religion writer at the Knoxville News Sentinel. Canon Spellers is the author of numerous books.

The Rev. Canon Stephanie Spellers is one of the Episcopal Church’s leading thinkers and consultants around 21st century ministry and mission and is Canon to the Presiding Bishop for Evangelism and Reconciliation.

Mr. Freddie Brabson, Good Samaritan Director of Music and Liturgy, Mr. Brian Clay, Jazzspirations, and Mr. Vere Henry, Caribbean bandleader, will provide varied musical selections to accompany the liturgical service. Immediately after the service, everyone is encouraged to stay for a reception hosted by members of Good Samaritan and the UBE.

The service, which is open to the public, will celebrate the life and work of The Rev. Absalom Jones, an early 19th-century pastor who is known as the first ordained African American priest of The Episcopal Church. Jones was born a slave in Delaware and went on to help found St. Thomas African Episcopal Church in Philadelphia, Penn. It was the first black Episcopal parish in the U.S.

The event is sponsored by the East Tennessee Union of Black Episcopalians (UBE). Formed in 2011 by local activists interested in maintaining a voice for interracial solidarity in the church, UBE is part of a longstanding, international UBE organization that has chapters in the U.S. Canada, Africa, and Latin America.