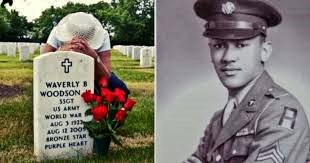 The 75th anniversary of World War II’s D-Day was recognized on June 6, 2019. Over 2,000 black soldiers landed on the beaches of Normandy on that day. 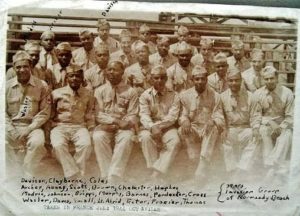 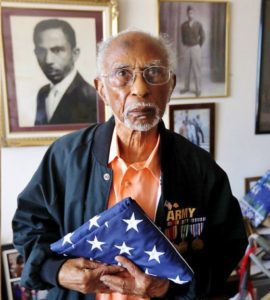 NATION-WIDE (June 2019) – One of them was SSgt. Waverly Bernard “Woody” Woodson, Jr., who left his studies at Lincoln University in Pennsylvania to enlist in the Army.

Decades later, Woodson learned that he had been nominated for the Medal of Honor.

In 1997, then President Bill Clinton belatedly awarded the nation’s highest award for valor to seven black soldiers who had been denied their D-Day decorations.  “History has been made whole today,” Clinton said. But Woodson, the only one of whom was still alive to receive it was denied.

On the 50th anniversary of D-Day in 1994, the French government honored three WWII veterans with an all-expenses-paid trip to Normandy and presented each of them with a palm-sized medal commemorating their service. “I was the only black man of the three,” Woodson said. 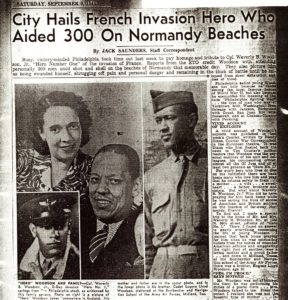 The United States Army and the country he voluntarily fought for refuses to honor SSgt. Woodson with the Congressional Medal of Honor.

Waverly Woodson died in 2005. His headstone in Arlington National Cemetery lists the Bronze Star and Purple Heart. His widow Joann turned 90 on May 26, and has made it her mission to see that her husband’s heroism is acknowledged. “I will fight for him as long as I live,” Woodson said from her home in Clarksburg, WV outside Washington, D.C. as reported in a June 2019 TIME Magazine article. 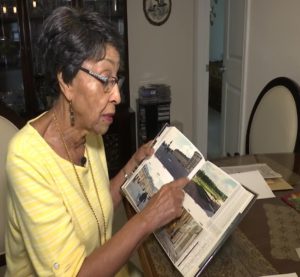 Joann Woodson was hopeful that her husband’s acts of heroism would be acknowledged in 2019, the next big anniversary of D-day. “Seventy-five years is a long time to wait for justice,” she said. But it is still yet to come.

“This is a big enough award that the President can give it personally,” as was written in a note from an official in the Office of War Information, to an aid to an aide to then President Franklin D. Roosevelt.

A fact that was recently confirmed when the current President recognized Rush Limbaugh, who is only a supportive Fox News personality, during his presidential address in February 2020.

The Congressional Black Caucus is supporting the Woodson family in their fight by restarting a push for war hero SSgt. Waverly Woodson, Jr. to be recognized as such by the US Army. A petition of support can be signed by clicking HERE.

Maryland Sen. Chris Van Hollen Jr., is leading the charge on Capitol Hill to persuade the Army to reconsider Woodson’s case. “Corporal Woodson was a hero who saved dozens, if not hundreds, of lives on Omaha Beach. His courage deserves to be honored with the Medal of Honor,” Van Hollen said in a statement. A petition of support can be signed by clicking HERE.

Woodson was a medic from Philadelphia with the 320th Barrage Balloon Battalion, the only black combat unit to participate in D-Day. Their mission was to raise a curtain of hydrogen-filled balloons high over the beaches. The steel cable that anchored the balloons could sheer off the wing of a plane, a terrifying obstacle for German dive-bombers. Then a cable when struck, would also trigger a small bomb attached under the balloon that packed a potentially lethal punch for a plane ensnared in the trap. An important mission that protected troops on the ground and in the air.

The 320th was mostly written out of the story of D-Day. The majority of books and all of the movies about D-Day omit them, although the movie, “Saving Private Ryan” shows their balloons but not their black faces.

SSgt. Woodson was one of the first Black soldiers to make it onto Omaha Beach in Normandy on June 6, 1944. The 21-year-old’s boat was hit by a mortar as they made it to the French shores and shrapnel tore apart one of his legs while killing the man next to him. After slapping a bandage on his gruesome wounds, he set up a medical tent and began treating the soldiers around him who were being hit by barrages of German gunfire.

“The tide brought us in, and that’s when the 88s hit us,” Woodson told the AP in 1994. “They were murder. Of our 26 Navy personnel, there was only one left. They raked the whole top of the ship and killed all the crew. Then they started with the mortar shells.”

Woodson saved over 200 warriors of all races that day. He even pulled four men out of the water by himself and conducted CPR. He revived soldiers, performed amputations and pulling shrapnel or bullets out of wounds for 30 hours before he passed out from his own wounds.

“It is never too late to say thank you,” said Pres. Barack Obama in June 2015, when he awarded the Medal of Honor to Henry Johnson, an African-American World War I hero.

It’s well past-time to posthumously present the 90-year old widow and family of SSgt. Waverly Woodson, Jr. with his honor. If you agree, include your name to this online petition of support by clicking HERE.