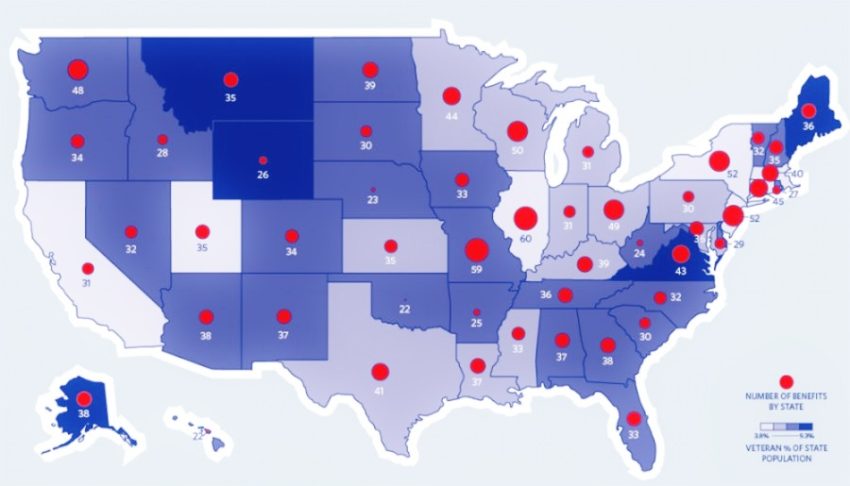 CAPTION: A map from the Center for a New American Security’s report, “From Sea to Shining Sea: State Level Benefits for Veterans,” shows the number of veteran benefits by state, ranging from a low of eight in the District of Columbia to a high of 60 in Illinois, with an average of 36 benefits offered. (CENTER FOR A NEW AMERICAN SECURITY)

WASHINGTON, D.C. (Nov. 11, 2019) – Several years ago, Iraq War veteran Kayla Williams and her family moved to Pennsylvania, where she and her husband received $500 each semester toward her two children’s school costs, thanks to a statewide benefit.

The only problem? They had relocated from Virginia — a state that provides free tuition to children of disabled veterans. Williams’ husband, also a veteran, has a 100 percent disability rating from the VA.

“I was shocked by that difference,” Williams said. “My husband had the same level of disability, but the difference between free tuition and $500 each semester was so stark. I thought, ‘I have to know more.’ ”

Williams and her family moved back to Virginia after just one year in Pennsylvania because of a job opportunity. Williams led the Center for Women Veterans at the Department of Veterans Affairs before taking her current position as director of the military, veterans and society program at the Center for a New American Security, a Washington think tank.

In her new role, Williams looked back at her family’s move to Pennsylvania and decided to investigate the differences in benefits for veterans, state by state.

She discovered that different states offer a wide variety and number of benefits, from a high of 60 benefits in Illinois to a low of 22 each in Hawaii and Oklahoma. Many of them were enacted by state legislatures after the 9/11 terrorist attacks, creating what the Center for New American Securities describes as a “sea of goodwill.”

However, no state does a very good job of promoting the benefits or providing an easy process to apply for them, the think tank found. Williams’ findings were released Monday, on Veterans Day, in a new report titled, “From Sea to Shining Sea: State Level Benefits for Veterans.”

“To do this research has been totally eye-opening,” Williams said. “We were really struck by how hard it was to find these benefits. What’s the point in having a benefit if people can’t figure out how to use it?”

To address that problem, the Center for a New American Security created an online database that allows veterans to search for and compare state benefits. The tool was also launched Monday, along with the report.

In her research, Williams discovered states in the Midwest and Northeast provide a higher number of benefits on average than states in the South and West. That fact was surprising, Williams said, because southern states typically have higher rates of military enlistment.

“It’s a big assumption that the South is so patriotic and they love the military, and they join the military, so they’ll support them after,” Williams said. “But that isn’t necessarily how it played out.”

The study couldn’t pinpoint a single state that had the best benefits for veterans because what’s offered varies so greatly state by state, she said. While Illinois has the most, it’s unclear if the benefits there are more valuable in total than what another’ state may offer.

“There’s just a lot of variation in who’s eligible, what the benefits are and the value of the benefits,” Williams said.

The report contains takeaways for state leaders and veterans. State officials should make the benefits easier to apply for and receive, the report says, and analyze whether the benefits they offer are serving the state’s intended goals.

For veterans, the think tank recommends building a better awareness of state-level benefits and factoring those into decision-making when choosing where to live. Unlike with her family’s move to Pennsylvania, Williams plans to research state benefits when it comes time to choose a new home.

“This needs to be one thing that we weigh when we decide if we’re going to move,” Williams said. “Weighing this, knowing this is something to consider if we want to move, is the biggest lesson that I’ve taken away — that it can be so significant.”