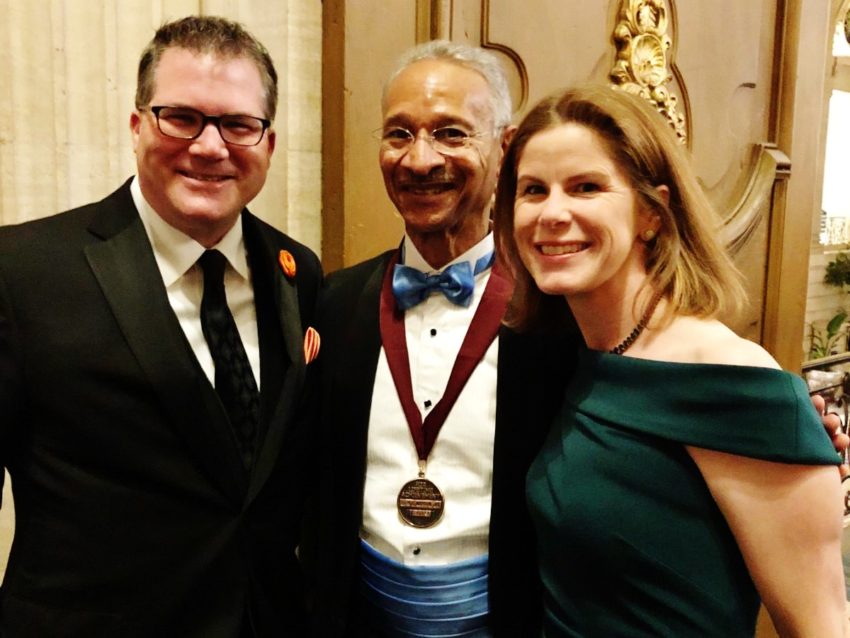 CHICAGO, IL (Nov 2019) – In 1971, Dr. John H. Morrow, Jr. became the first African-American faculty member in the College of Arts & Sciences at the University of Tennessee, Knoxville, where he taught for seventeen years. During that time, he was selected as a National Alumni Association Outstanding Teacher and UT Macebearer – the highest honor a faculty member can receive. Morrow was also Head of the UTK History Department from 1983-88.

Following his successful teaching career, the University of Tennessee recognized Morrow with an award for Excellence in military history, and named the “Fleming-Morrow Lecture Series in African-American History” in his honor. The lecture series is in its fifth year and is held annual in February on the UTK campus.

The award was presented at the organization’s annual Liberty Gala on November 2 in Chicago where Knoxville City Councilman At Large Larsen Jay and his wife Adrian were in attendance.

“I am truly honored to accept the 2019 Pritzker Military Museum & Library Literature Award for Lifetime Achievement in Military Writing,” said Dr. Morrow. “Receiving the award after nearly fifty years of historical writing, teaching, and consulting constitutes the ultimate affirmation of my career as a scholar of the history of modern war and society,” said Morrow.

Morrow is an accomplished military historian, respected professor, and author or co-author of 8 publications. Morrow has gained recognition for his ability to demonstrate how the past and the present intertwine inextricably.  His most recent publication Harlem’s Rattlers and the Great War: The Undaunted 369th Regiment and the African American Quest for Equality. Other works include The Great War: An Imperial History, The Great War in the Air, and German Airpower in World War I, among others.

Morrow is a graduate of Swarthmore College and the University of Pennsylvania and a recipient of the U.S Department of the Army Outstanding Civilian Service Medal. Most recently, he served as the Franklin Professor and Chair of the History Department at the University of Georgia where he taught courses on the history of Modern Europe and of warfare and society. Morrow also contributed to the education of faculty and students at the National War College, the Air War College, and the U.S. Military Academy at West Point.

About the Pritzker Literature Award

In its thirteenth year, the Pritzker Literature Award was first presented to historian James McPherson in 2007. Past recipients – several of whom served as members of the award’s 2019 screening committee – are Dennis Showalter, Peter Paret, Sir Hew Strachan, David Hackett Fischer, Sir Antony Beevor, and Tim O’Brien. The Pritzker Literature Award includes a gold medallion, citation, a $100,000 honorarium, and recognizes and honors the contributions of a living author for a body of work dedicated to enriching the understanding of military history and affairs.