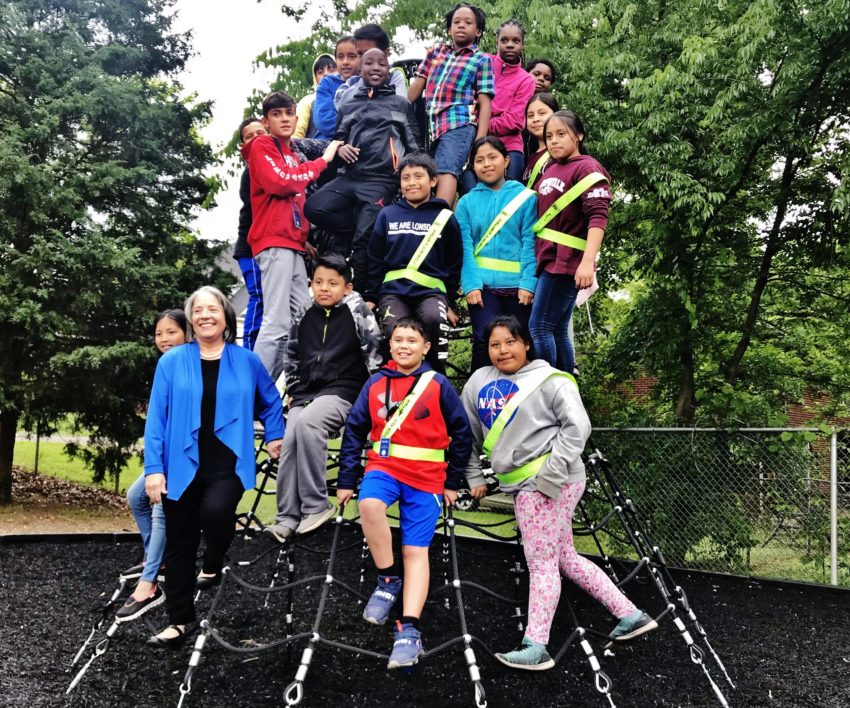 Mayor Rogero celebrated upgrades the city made to the playground of Lonsdale Park that were completed in July 2019; then deeded to Knox County in a Nov. 5 landswap.

Some of the amenities are years away from final construction. But Knoxville City Council, Knox County Commission and the Knox County Board of Education have taken important steps toward implementing a coordinated plan to infuse investment and opportunity into one of Knoxville’s most diverse and growing historic communities.

Most recently, Council on Nov. 5 unanimously supported a request by Mayor Madeline Rogero’s administration to authorize a land swap with Knox County and the school board:

Emerald Youth Foundation and its Haslam-Sansom Ministry Complex at Lonsdale will be the first community partner to complete its part of the long-term plan.

Next month, Emerald Youth is expected to open its $8 million facility at 1740 Texas Ave. to serve nearby families. Located next to the Sam E. Hill School, the complex will include two multipurpose synthetic turf fields and a 30,000-plus-square-foot multipurpose facility with a learning center, two full-size gymnasiums with basketball courts, a fitness area and a performing arts area.

Additionally, the facility will house a first-of-its-kind partnership with Cherokee Health Systems and the University of Tennessee Medical Center to provide access to preventative care and wellness programs as well as treatment for acute and chronic conditions.

“Very simply, this project would not have happened but for the private investment of the Dee and Jimmy Haslam and Elisabeth and Bill Sansom,” said Emerald Youth President and CEO Steve Diggs. “I am deeply grateful to them, but also to the Lonsdale neighborhood leaders who had this vision many years ago. The cooperation we have had from local government partners has also been critical to this project.”

When Emerald Youth Foundation initially approached the City about its desire to create new youth-serving programs and facilities in Lonsdale, it was a good fit with the City’s goals. At the same time, as part of the City’s long-term investment in Lonsdale, the City had acquired a large block of blighted property off Texas Avenue.

That was the block that the Haslam and Sansom family foundations ultimately purchased at fair market value to be leased to Emerald Youth for the recreation complex. To complement the philanthropic investment, the City committed nearly $1 million to build new public sidewalks, install new street lighting and plant street trees on Texas Avenue to make it safer and easier for families to access the center.

“The long-term collaboration between the City, County and Board of Education – combined with significant private philanthropic investments from the Haslam and Sansom family foundations – is truly a win-win for the children and families of Lonsdale,” Knoxville Mayor Madeline Rogero said. “The public and private stakeholders have taken a bold vision and are making it a reality.”

“This is a very exciting time for the Lonsdale community,” Mayor Jacobs said. “It’s a great example of the important role public/private partnerships play in making our community the best it can be. We look forward to celebrating these new amenities in Lonsdale.”

“We are thankful to the City and County for working with us to provide a suitable space for our students in the Lonsdale area,” Superintendent Thomas said. “This new school will be an exciting addition to the community and to Knox County Schools. We look forward to moving onto the next steps.”

There is a long history of public investment in Lonsdale and public partnerships with nonprofits and government agencies.

Some examples: KCDC in 2006 invested $26 million in renovations to Lonsdale Homes. The City Community Development Department has invested more than $2.5 million in the past decade to help homeowners repair their properties and to build new energy-efficient homes through partnerships with entities like HomeSource and East Tennessee Housing Development Corp. Dozens of homes have been upgraded through the KEEM energy improvement program.