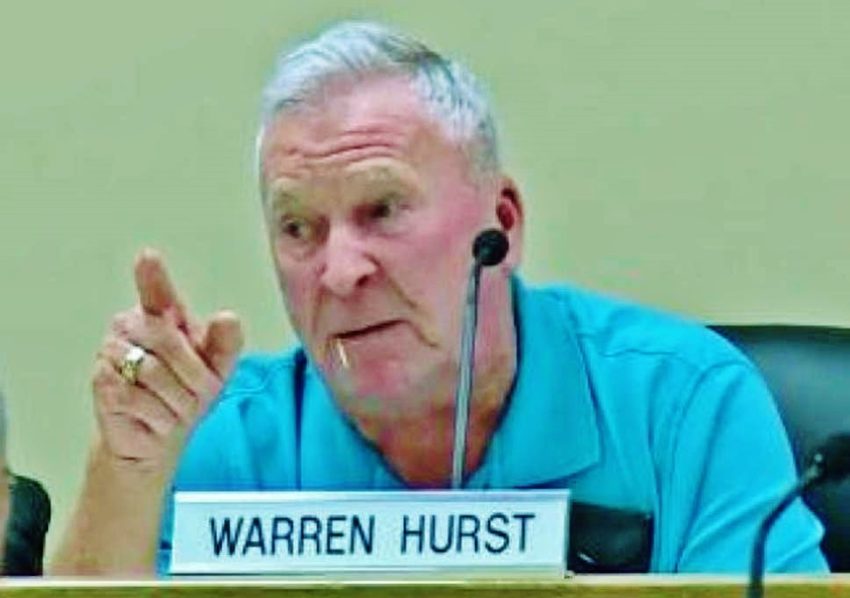 SEVIERVILLE, TN (Oct. 2019) Sevier County Commissioners discussed an impending vote on becoming a gun sanctuary city at its commission meeting on Oct. 21, 2019. Sevier Commissioner Warren Hurst used no diplomacy when expressing his position on the matter.

WVLT News was at the meeting and observed as one woman stood up and replied to Hurst, “Excuse me” she said. “This is not professional. This is [expletive].” and left the meeting.

Upon leaving Sara Thompson said Hurst’s homophobic comments left her angry. Officials “represent those who don’t love, look or vote like they do.”

“I was actually incensed. I think that was a very demeaning and nasty thing to even talk about,” she said.

Thompson is the Chair of the Sevier County Democrats and attended Monday night’s meeting as a private citizen and was one of only two people present protesting the county’s proposal to become a gun sanctuary.

While Hurst made his comments many of his fellow commissioners nodded in agreement as they chuckled. The majority of the crowd applauded following Hurst’s tirade.

Multiple organizations and a few of Hurst’s fellow commissions have spoken out against Hurst’s comments:

Commissioner Greg Haggard, said, “Commissioner Hurst’s comments do not speak for the rest of the county commission.”

A Dollywood spokesperson released the following statement: “We read the comments made in Monday night’s County Commission meeting and they do not reflect the Dollywood experience in any way. Dollywood is open and welcoming to everyone, every day.”

During the meeting, Hurst also expressed his views on the state of white male rights in the country.

“I’m not prejudiced, a white male in this country has very few rights and they’re getting took more every day,” said Hurst.

Hurst told WVLT News over the phone that some of his best friends were African-Americans, but he stands by his comments because he’s entitled to his opinions.

The Tennessee Equality Project is calling for his resignation after his comments about the LGBTQ community.

“He should apologize and yes he should consider resigning,” said a TEP representative. “If there were some weird extenuating circumstances like he was having a medical issue, but right now it just looks like he made those remarks.”

The fall-out continues as it has been reported that some out-of-state visitors have canceled their reservations for the coming holidays.

The target of Hurst’s homophobic remark is XXXX Mayor Pete Buttigieg who is a candidate for President of the United States. Buttigieg’s response to the incident, “Well, he was right about one thing. He’s right that there’s a gay man running for President. He doesn’t seem to be right about much else.”