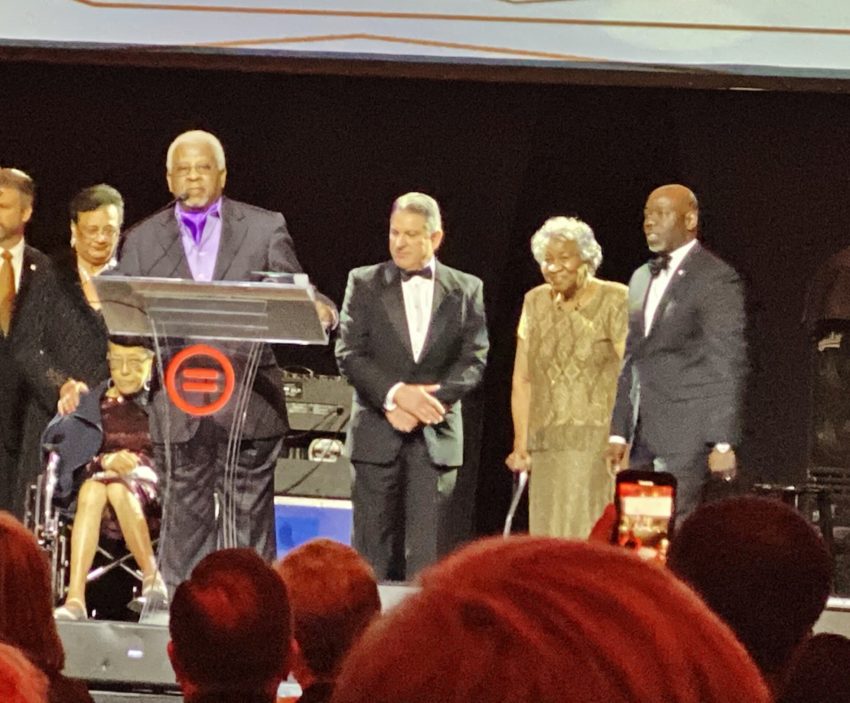 KNOXVILLE, TN (Oct. 2019) The Knoxville Area Urban League honored “The Clinton 12” with its lifetime achievement award at the Equal Opportunity Awards Gala that was on Thursday, Oct. 24 at the Knoxville Convention Center. The volunteer, minority business and corporate leadership award winners were also recognized.

Jazz and gospel performer Chanté Moore was the featured artist for the 2019 annual gala and night of celebration that is the Knoxville Area Urban League’s most significant fundraising event of the year.

“The Equal Opportunity Awards has recognized and saluted the power of individuals to impact their communities for more than 50 years,” said Phyllis Y. Nichols, president and CEO of the Knoxville Area Urban League. “It is always incredible to see the people come together to enjoy music and camaraderie and celebrate our community leaders who make a difference in civil rights, education, homeownership, job creation and entrepreneurship in our city.”

“The Clinton 12” refers to the group of African-American students who led the integration of Clinton High School in Clinton, Tennessee, in 1956 following the U.S. Supreme Court’s historic decision in Brown v. Board of Education that segregation in schools was unconstitutional. The reaction in Clinton was peaceful until white supremacists showed up to agitate the community, resulting in violence, angry mobs, and, two years later, a bombing at the school.

August 2019 marked the 50th anniversary of the journey of the Clinton 12. The remaining members were honored with a parade where they, dignitaries and community members walked the original 1956 route to Clinton High School.

But this time was different. The route was lined with supporters and students from area schools with recognition instead of rejection.

The KAUL gala also celebrated the organization’s historical milestones and community impact. Attendees had the opportunity to network with community leaders and area business professionals and enjoy the voice and artistic vision of Moore. The music of Moore, a certified gold R&B singer, is steeped in gospel roots and soul. She has performed for two decades.

WBIR Channel 10 anchor Louis Fernandez served as host for the event, and Nichols and Cavanaugh Mims, the board chair for the Knoxville Area Urban League, shared the successes of the past year.

About the Knoxville Area Urban League

Since 1968, the Knoxville Area Urban League has assisted disadvantaged people to attain social and economic stability and self-sufficiency through direct services and advocacy. The League works to provide a skilled and diverse workforce; to increase homeownership; to support economic and small business development, and to enhance education efforts for our youth. The Knoxville Area Urban League is a United Way partner agency and an affiliate of the National Urban League. The League’s work and results are evident in the lives of the over 8,000 people it impacts each year. For more information, call 865-524-5511 or visit www.thekaul.org.