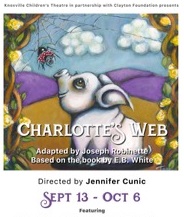 Knoxville Children’s Theatre will present a live stage adaptation of the classic children’s novel Charlotte’s Web, by E. B. White. The play will be performed September 13 through October 6: Thursdays and Fridays at 7 PM, Saturdays at 1 PM and 5 PM, and Sundays at 3 pm at 109 E. Churchwell Avenue. For tickets go to Knoxvillechildrenstheatre.com.

Charlotte’s Web is one of the top 100 bestselling books of all time and the best-selling children’s paperback book ever. The New York Times called it “just about perfect, and just about magical in the way it is done.” Tony-winning playwright Joseph Robinette’s touching and faithful stage version will make audiences believe this beloved book is coming to life on the KCT stage.

In rural Maine, Wilbur, a young orphan pig, is loved by his owner, Fern Arable. But the pig is destined to be slaughtered for food, and as soon as he is old enough, the Arables send the pig to his fate on the Zuckerman family farm. A lonely, childless spider named Charlotte, who lives in a dark corner of the Zuckerman’s barn, takes pity on the pitiful little pig and decides to do what she can to save his life. Wilbur is grateful for this mysterious mother figure, but the act of true motherhood will come at a costly price for
the tiny spider.

The play is performed by 19 talented young actors, from ages 7 to 17. Ava Bradshaw, a KCT veteran performer who was last seen in KCT’s Macbeth, plays the part of the motherly spider Charlotte. Annika Kallstrom performs the role of Wilbur. Leeland Robbins will play the part of Fern Arable, and Ethan Johnson and Bray Krumenacker play the Zuckermans.

The play is directed by Jennifer Cunic. Cody Chaffins, a senior at West High School, provides the scenic design, and Quintin Rhodes, a junior at L&N STEM Academy, and Charlotte Stark, a homeschooled senior, will design and build the costumes. Central High senior Jacob Sousley will design lights The stage manager is Joseph Coram, a junior at Halls High School.