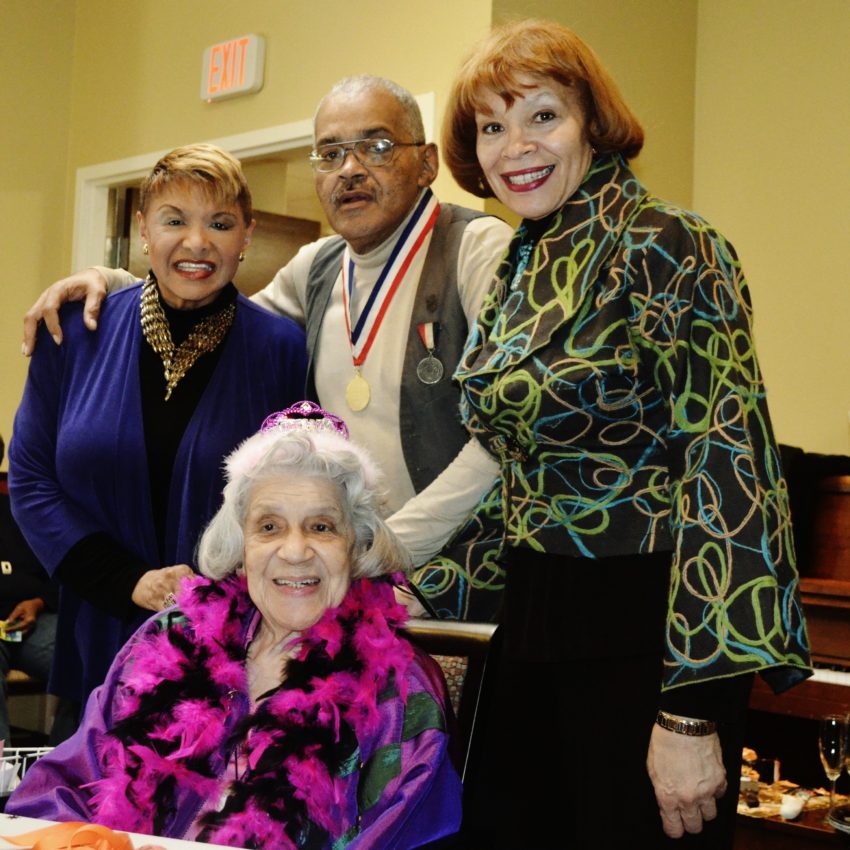 Republished from December 2015 in the Knoxville News-Sentinel to honor Mrs. Olga Lash Barnes who died in June 2019. Go to the ETE Obituaries for more information.

(KNOXVILLE, TN – Dec. 2015) – Mrs. Olga Josephine Lash Barnes recently celebrated her 100th birthday at the Holston Hills home of her daughter and son-in-law, Dr. Olga and George Welch. Barnes began her career in East Tennessee after graduating from Livingstone College in her hometown of Salisbury, NC.

“My first job out of college was teaching English and English Literature at Morristown College,” said Barnes; with a rhythmic lilt in her voice when she pronounced “li-ter-uh-chur;” as she recalled the time she spent in East Tennessee.

Barnes completed her bachelor’s degree when she was 19-years old making her younger than most of the college students she was teaching.

Barnes’ parents Rev. Wiley Hezekiah and Mayzonetta (Mary) Grundy Lash were both college graduates in the late 1800s, who made education a priority among their six children. The couple opened Lash Self-Service Grocery Store that grew into a chain of seven stores around the Salisbury area.

Rev. Lash pastored a church in Greensboro, NC; and was the first Black to graduate from Concordia Lutheran Seminary in Missouri according to Barnes.

“I remember riding to church every Sunday with a quilt across my lap. I don’t think cars had heaters then, but not many people had cars,” said Barnes. “My mother was a shrewd businesswoman and my father was honest and hardworking.” The Lash’s built a respected, privileged life.

Olga and Samuel Edward Barnes first met when they were both teachers in North Carolina and were married in 1943.  Samuel had a bachelor’s in health and physical education from Oberlin College in Ohio. Samuel’s parents were both college-educated.

When they married, Olga was a librarian in New Jersey; and Barnes had joined the Navy and was stationed in Illinois. Shortly after they exchanged vows, Barnes was selected to attend an “Officers’ Indoctrination School for Negroes” that ultimately made him a member of “The Golden Thirteen” who were the first Black officers to be commissioned in the United States Navy.

Barnes put her career on hold to enjoy being a full-time wife and mother after their first of 3 children, Olga Michele was born shortly followed by Alexa, and Michael David.

The Barnes’ children were 8, 10 and 12 when Olga decided to cut her long flowing hair and went back into the workforce. “I didn’t have time for it anymore,” said Barnes. But her children were devastated. Michael told her she looked like a boy, and they all missed coming home from school at lunchtime to Campbell’s soup and a sandwich according to Alexa.

Michael, the only son, has fond memories of his mother chaperoning his class field trip to Williamsburg, VA. “We really bonded on that trip. I felt like I was the only one there,” recalls Michael; who had a personal tour guide and was oblivious to the presence of others. Michael is the only offspring of the Golden Thirteen to pursue a military career. He served in the Coast Guard, retired from the Navy in 1992; and now lives in Harlem.

Alexa Donaphin recalls the times that her mother filled in as a substitute teacher at her school. “She was stunning and beautiful. My classmates were in awe of my mother. It made me so proud,” said Donaphin who is a graduate of Howard and Harvard Universities and is a Principal at one of New York’s largest architectural firms.

The Barnes’ firstborn and her namesake, Olga Michele Welch has dedicated her accomplishments to her mother as a symbolic appreciation. “She sacrificed her career to be my mom, and all I do is in her honor,” said Welch. “Her name is on everything I’ve earned and she is always with me.” Welch’s accomplishments include a doctorate, nad full professorship at the University of Tennessee Knoxville where she also served as Dean of the College of Education; College of Health and Human Services. Welch is currently Dean of the School of Education at Duquesne University in Pennsylvania. She commutes to Pittsburg with the support of her husband George who oversees their Knoxville empty- nesters home and their two young adult daughters Taja and Stephani Welch.

At that time, Barnes also went back to school and earned a Master’s degrees from Columbus Univ. in Ohio and the University of Chicago. She and her husband settled in Washington D.C.  where she retired as a librarian at the Library of Congress.

Olga Lash Barnes enjoyed supporting her children’s pursuits, and those of her husband before she resumed her career. During their retirement, Olga and Samuel were able to enjoy their personal successes and celebrate the accomplishments of their children before he passed in 1997.

In the 1990s, then Pres. William “Bill” Clinton acknowledged the members of the United States Navy’s “Golden Thirteen” for their service and sacrifice in a ceremony at the White House.

Throughout their lives, members of “The Golden Thirteen” continued to declare many Black American firsts. Barnes went on to earn a doctorate degree and became the coach and athletic director at Howard University and the first Black governing member of the National Collegiate Athletes Association (NCAA).

The 2008 Lash family reunion, in Salisbury, NC, was in conjunction with a ceremony to honor Barnes’ deceased brother, Wiley Immanuel Lash (1908-1995), who was Salisbury’s first Black mayor from1979-1985; and was later the first Honorary Mayor to be appointed.

Barnes is the epitome of a woman who knew how to have it all that applies both then and now. “Each in its own time, that’s important,” according to Lash. Her life exemplifies her priorities. She gained a college education, then a loving husband, enjoyed being a stay-at-home wife and mother with much her life left to have a fulfilling career.

A memorial service was held in Knoxville on July xx. Mrs. Barnes’ earthly remains will be interred at a later date in Arlington National Cemetery in Washington, D.C. beside those of her beloved husband.